Protests over geothermal development heat up in Central Java

PURWOKERTO, Indonesia — This January, the people of Karangtengah Village in Central Java were surprised to find that the river running past their homes had turned murky. Not only do the villagers rely on the Prukut River for freshwater, it also tumbles down in the scenic Cipendok Waterfall, the centerpiece of a local tourism industry.

Before long, the villagers identified the source of the muck polluting the waterway: mud and debris from a once-forested plot of land that had been cleared to make way for a planned geothermal power plant in Baturraden, a tourist resort on the southern slopes of Mount Slamet.

Indonesia is hungry for electricity to help power its economy and raise living standards across the archipelago. The country’s electricity demand is projected to increase by an average of 9 percent per year to reach 328.3 terawatt hours (TWh) in 2020, double 2012 levels.

As the government struggles to keep pace with demand, few options look more attractive than geothermal — a 24-hour-a-day, 365-days-a-year source of very low carbon energy that is available in abundance throughout the volcanic islands that form the Indonesian archipelago. The country is estimated to have geothermal capacity of more than 28,000 megawatts, the largest in the world.

So far, this potential is largely untapped. Indonesia currently has installed capacity of 1,403 megawatts from geothermal fields in Java, Sumatra and Sulawesi. The government aims to expand that to 7,200 megawatts by 2025, making geothermal energy a key part of its plan to derive 23 percent of its electricity from renewable energy.

The Baturadden power plant, the development responsible for muddying the Prukut River, demonstrates that while these projects can bring tremendous benefits, they are not entirely without social and environmental costs.

The plant, which is being developed by independent power producer PT Sejahtera Alam Energy (SAE), is expected to generate 220 megawatts of electricity from three turbines. Power from the plant will be transmitted to five districts in Central Java: Banyumas, Purbalingga, Tegal, Brebes and Pemalang.

The heat to drive these turbines comes from Mount Slamet, an active stratovolcano standing 3,428 meters (11,247 feet) high and spanning 420 kilometers (260 miles) at its base. It last erupted in 2009, but in September 2014 the volcano spewed lava and ash as high as 3,000 feet above its peak, prompting authorities to put the mountain on level-3 alert status, with level 4 being the highest.

“The [Baturraden geothermal] project will create multiplier effects to the economy, especially prosperity to the people surrounding the [districts] and Central Java. We are promoting a cleaner environment by reducing the country’s CO2 emission for more than 205,000 ton per year,” the firm says.

In 2010, the company obtained a 35-year concession from Indonesia’s Ministry of Energy and Mineral Resources to develop a 24,660-hectare (95.21 square miles) plot of land in Baturraden.

So far, some $30-$35 million has been disbursed for the project which is currently in the exploration phase for its first well. Overall, it is estimated to cost $1 billion.

The plant is targeted to be fully operational in 2022, according to PT SAE, a company whose ownership has previously been linked to a major political scandal.

Herman Afif Kusumo, who has been listed as President Commissioner of both PT SAE and PT Trinergy Mandiri International (which also owns a stake in PT SAE’s parent company PT Trinergy) was named in a notorious corruption case involving former energy minister Jero Wacik. Kusomo and other company officials were not charged with any wrongdoing, but the Jakarta anti-corruption court proved that Wacik in 2012 improperly accepted a 349 million rupiah birthday party from Kusomo, part of a list of financial improprieties for which Wacik was sentenced to four years in prison for graft. 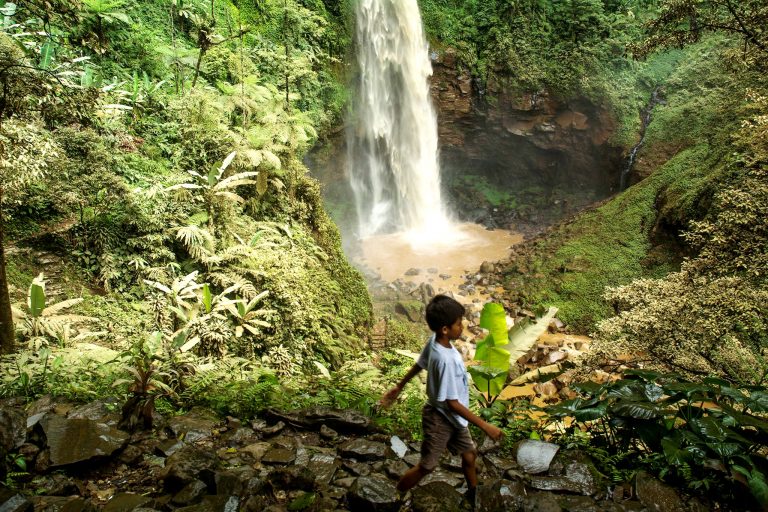 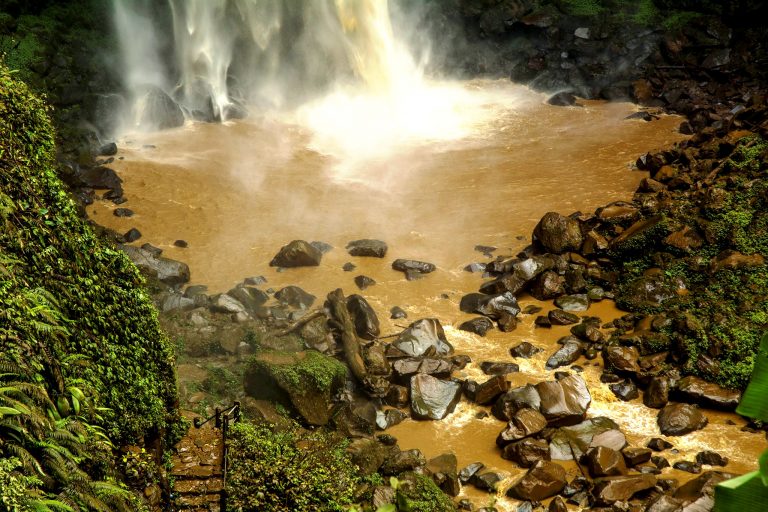 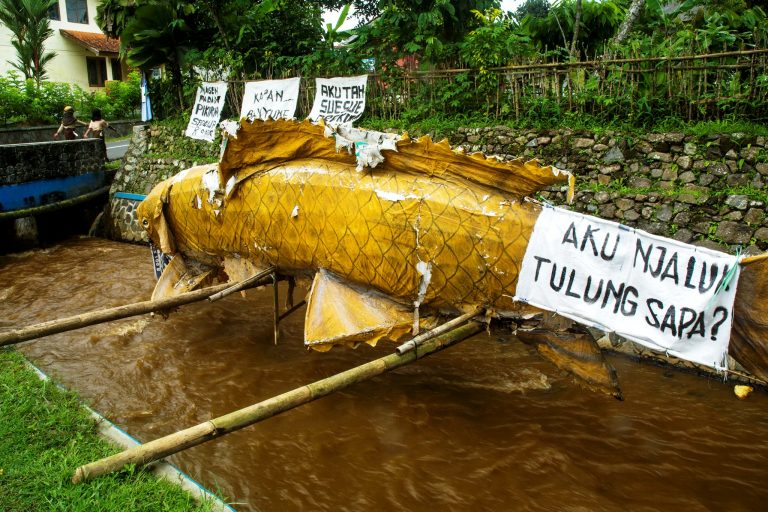 By late 2016, as the project progressed, people from villages in Banyumas district grew worried about the impacts the plant could have on them, especially given the country’s track record of industrial disasters.

“Honestly, we are still concerned about the dangers of the [exploratory] drilling,” Asong, a Melong village resident who like many Indonesians only has one name, told Mongabay in November.

“Will it be like the Lapindo mud in Sidoarjo, or what?” he added, referring to the mud volcano that erupted in 2006 during drilling by Indonesian oil and gas firm PT Lapindo Brantas.

Even before work began on the plant, the Mount Slamet area already faced environmental degradation due to land conversion and deforestation.

According to local green group Mount Slamet Concerned Community (Kompleet), data from the Banyumas environment and forestry department shows that some 1,321 springs were lost between 2001-2011.

“The potential loss of springs will be even greater [with the plant development], and this has become a serious threat to the community,” Dhani Armanto, an activist with Kompleet, said in a statement to local media.

Katur, a 51-year-old man from Karangtengah Village said he has had to start filtering the water from the Prukut River, which comes from the Cipendok waterfall.

“I use the river water for my daily activities — showering, cooking, and drinking,” he told Mongabay in January.“For those with cash, they can afford gallon jugs of freshwater. But, for a farmer like me, it’s impossible.”

The contamination has also discouraged tourists from visiting the waterfall, which locals say got murkier and murkier before turning completely brown in January.

“Those who still go here most likely didn’t know that the water has turned murky, because if they did, they wouldn’t have come. People like taking a swim [in the waterfall] the most,” said Hadi Purnomo, an officer from the Cipendok waterfall tourism zone.

The incident has sparked protests from the locals who put up signs around the rivers saying “Help, I want to live” and “Where can I get help?”

In February, research by local NGO Lingkar Kajian Banyumas (LKB) showed that the mud and debris resulted from exploration activities for the geothermal plant.

PT Sejahtera Alam Energy apologized for the incident, and said they would install filters to clear up the water, after the Banyumas public works department told the firm about the pollution.

“We will also help provide freshwater for the people’s needs,” Hermansyah, then site manager at the company, told Mongabay-Indonesia at the time.

Despite these promises, the river turned brown again in July, prompting even stronger protests. Local activist group Save Slamet Alliance marched on July 18 towards the Banyumas council office demanding for the project to be shut down.

“The subsequent impacts from the project include landslides and massive flooding, because most of the southern slopes of Mount Slamet are in the red zone, which means it’s prone to land movement,” said Slamet Muflih Fuadi, coordinator of the group.

The group has also extended their protest online by putting up a petition calling on Indonesian President Joko Widodo and other government officials to revoke the permit for the project. So far, it which has gathered a little over 22,000 of the 25,000 signatures it is seeking.

The petition highlights the threat of wildlife habitat loss due to the plant’s development. Species including the Endangered Javan hawk-eagle (Nisaetus bartelsi) and the Vulnerable Javan leopard (Panthera pardus melas) have been spotted in the Mount Slamet area.

An analysis by local activist group Kompleet estimates that by the time the plant and supporting infrastructure like access roads are developed, the total cleared forested area will have reached more than 600 hectares.

In 2012, PT Sejahtera Alam Energy obtained an IPPKH — a permit which is required for firms wanting to carry out economic activity in forestry areas — from the then-Forestry Ministry for 44 hectares of land. But in October 2016, area covered by the permit was expanded to 488.28 hectares, according to a report from local news site Braling.com — although the Banyumas district office, which admits that 90 percent of the total concession area is indeed protection forest, insists the power plant and its related infrastructure will only span 137.5 hectares.

In the meantime, a 2003 regulation that banned geothermal drilling in forested areas was relaxed in 2014.

Bregas Rochadi, a director at PT Sejahtera Alam Energy, has pledged to reforest twice as much land as is cleared for the project.

“[We are] committed to conduct proper drillings and implementing the best power plant technology [and] assuring excellence in health, safety and environmental protection,” says the company website.

Despite mounting resistence to the project, the government says it will continue.

“If we talk about data, let’s argue head-to-head so we can find the middle ground. However, everything must remain within the scientific corridor,” said Bambang Purbiantoro, a representative from the geothermal directorate at the energy ministry, at a public workshop about the Baturraden geothermal plant development in July.

“Indeed, the project has seen forest being cleared, but it’s a small extent compared to the size of forest cover on the slopes of Mount Slamet […] We also need to remember that geothermal is green energy, and a lot of people are rushing to invest in green energy,” he added.

This story was reported by Mongabay’s Indonesia team and was first published on our Indonesian site on July 31, 2017.

Correction: this story was amended Aug. 29 to clarify the timing of the interview with Hermansyah and the details of the corruption case against Jero Wacik.