BINJAI, Indonesia — A man on the Southeast Asian country’s main western island of Sumatra said goodbye to his pet crocodile this week, handing it over to authorities after learning it was a protected species.

The man, Firman, who like many Indonesians goes by one name, had kept the saltwater crocodile (Crocodylus porosus) in an enclosed pond behind his house for 13 years.

Firman said he got the crocodile from a friend in 2003. At the time it was only a meter long. Every day he would feed it a chicken or a duck.

By the time officials from the Natural Resources Conservation Agency (BKSDA) came to pick it up on Monday, the crocodile had grown to 4 meters (13 feet) and was consuming up to three chickens or ducks each day.

The officials had to summon a special crocodile handler to tie its limbs, pull a burlap sack over its face and load it into the back of a pickup truck.

“Because the owner did not know it was a protected species, we just asked him to explain himself,” said the BKSDA’s Herbert Aritonang. “The people here know these animals should not be kept as pets.”

All those ducks and chickens were expensive, Firman said, so he had tried to sell the beast. But nobody wanted it.

“It kept growing, so I asked my friends, and they advised me to hand it over to the BKSDA,” Firman told Mongabay. “So I did. I didn’t know the crocodile was protected.” 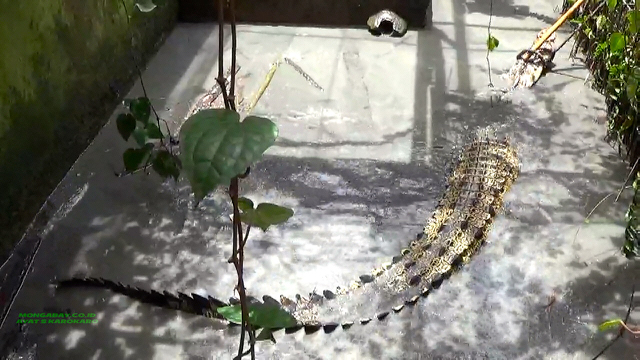 The saltwater crocodile is the largest of all living reptiles. It can live for up to 70 years and grow to weigh 1,000 kilograms (2,200 pounds).

Firman’s crocodile was taken from his hometown of Binjai, a city in North Sumatra province, to the Asam Kumbang Crocodile Park in nearby Medan.

Asam Kumbang is the largest crocodile breeding park in Southeast Asia, with more than 2,000 inhabitants. Visitors can pay $2 to feed the beasts a live duck.

The BKSDA’s Aritonang said the crocodile would be quarantined and rehabilitated, with the aim of restoring its wild nature so that it might one day be set free. 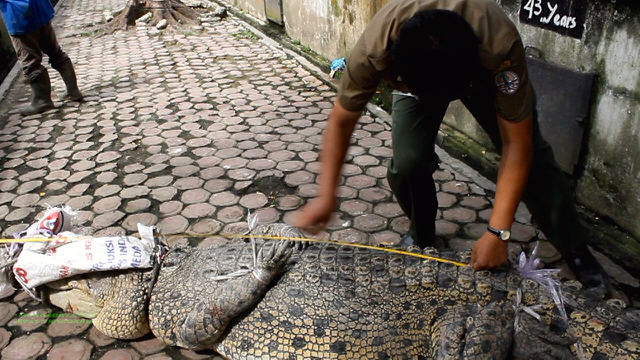 Firman had kept the crocodile in a pool surrounded by an iron fence. Every day people would come to see the animal.

“I was always worried that children would fall in the pool,” Firman said.

Firman’s neighbor Bik Iyah said Firman would ask visitors to bring meat for the crocodile, and sometimes ask for money.