It has been estimated that as much as 50 percent of tropical timber still comes from illegal sources. In response, international efforts to combat the illegal timber trade have intensified over the past decade and a half, with legislation like the U.S. Lacey Act, the EU Timber Regulation (EUTR), and amendments to Australia’s Illegal Logging Prohibition Act (ILPA) making the trade in illegal timber a punishable offense.

Brazil is typically ranked amongst the highest-risk countries in terms of illegality in its timber industry. The Brazilian tropical timber sector is responsible for the extraction of more than 13 million cubic meters of hardwood logs from Amazonian rainforests, and generates more than $3 billion in annual revenue. But it is estimated that more than 70 percent of timber products from the Amazon may come from illegal operations, which may involve theft of wood from conservation areas and indigenous reserves, use of slave labor, and other illicit practices.

This, combined with the fact that the timber industry in the country has fallen behind in adopting sustainability standards, has led to decreasing demand for timber products from Brazil, according to a new report by Brazilian non-profit BVRio Institute.

Timber production in Brazil has dropped by 40 percent in response to decreased demand. But another barrier to the production of legal timber is the “unfair competition” the industry faces from illegal operators, BVRio notes in the report.

“There is an urgent need to promote legality and sustainability in the Brazilian tropical forest sector and foster a step-change in the management of Brazil’s forests, to ensure the maintenance of standing forests and the reduction of GHG emissions from the land use sector,” the report states. 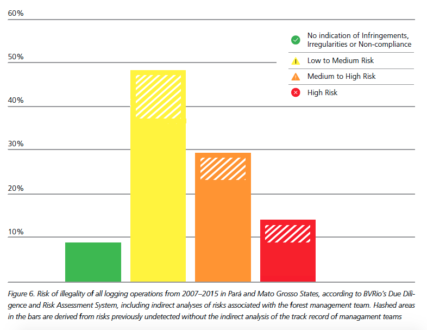 The production of forest products in Brazil is controlled by three official systems: a federal system created by the Brazilian Ministry of the Environment in 2007, and two state-level systems adopted by the states of Pará and Mato Grosso, which together are responsible for more than 70 percent of the country’s timber production.

All three systems cover activities related to timber production comprehensively, from permitting and extraction to transportation, processing, and commercialization. “The main focus of these systems is to ensure that every activity is documented, to enable wood products to be traced through the chain and forest management regulations to be enforced,” as the report puts it.

That means that there is a large and growing dataset on all aspects of timber production in Brazil — data that BVRio mines as part of its “Due Diligence and Risk Assessment System” in order to identify inconsistencies that may be associated with irregularities and illegality. The group has also created an app to help producers and buyers of tropical timber verify the legality of the products they’re trading.

BVRio’s analysis found that more than 40 percent of the forest management operations in the Brazilian states of Pará and Mato Grosso between 2007 and 2015 were at medium to high risk of having involved severe breaches of the law, such as timber theft from conservation areas or indigenous reserves, use of slave labor, and laundering of stolen timber by defrauding the official control systems.

Only 10 percent of the cases examined by BVRio showed no indications of irregularities.

Due diligence — which, in this context, is the idea that timber suppliers and purchasers must have valid paperwork for the wood they’re trading going all the way back to the point of harvest, and that they should also be assessing and mitigating the risk of illegal wood entering their supply chains — has become an important principle in the fight against the illegal timber trade. The Lacey Act, the EUTR, and the ILPA amendments all seek to implement this principle in some manner.

So it’s no wonder that BVRio is already looking to expand its Big Data tracking system to tropical forest countries in West Africa and Southeast Asia, starting with Ghana and Indonesia.

“Based on BVRio’s experience, the use of big data for risk assessment is promising, as it combines the outputs of a wide range of approaches rather than relying on any one in isolation,” the report concludes.

“Any initiative designed to increase the sector’s legality, however, depends on the availability and transparency of relevant information. It is essential that government agencies provide more transparency to enable better monitoring, greater control, and a reduction of illegality in the Brazilian tropical timber sector.”