A so-called “Blue-Ocean Event” — a period during the melt season with less than one million square kilometers (a little over 386,100 square miles) of Arctic sea ice — was not expected to occur until 2070 to 2100 by most science modeling projections of the early 21st Century.

Recent polar ice observations, however, indicate extreme loss of volume. Many climate scientists now project the first “Blue-Ocean Event” within a decade or less. Some experts speculate it may even occur during the melt season of 2016. 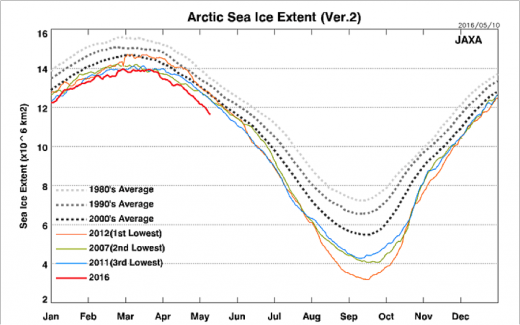 The status of ice frozen in water (“sea ice”) as well as that found on large portions of land is calculated by a variety of scientific institutions around the world. Ice condition information is acquired by the use of satellite imagery, passive-microwave scans, and direct physical measurements.

The European Space Agency’s CryoSat-2 satellite, in operation since October of 2010, is regarded as one of the most useful tools available to measure ice conditions. The satellite utilizes a set of specialized, highly sensitive radar range finders to calculate the differences in height between floating sea ice and adjacent water, resulting in specific calculations of sea ice volume.

Despite the precision of these instruments, projecting the exact summer sea ice conditions months before the annual minimum in September has proven challenging due to erratic, difficult to foresee weather patterns. The general state of the ice during the preceding winter, however, typically provides a foundation for annual predictions. This year CryoSat-2 data confirms slow winter sea ice growth, indicating the possibility of extreme summer melting. 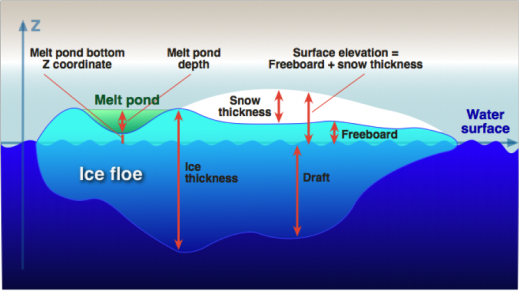 At the recent General Assembly of the European Geosciences Union, sea ice physicists Dr. Marcel Nicolaus and Dr. Stefan Hendricks of the Alfred Wegener Institute Helmholtz Centre for Polar and Marine Research compared 2016 winter ice conditions to those of the record low year, 2012.

Nicolaus and Hendricks combined observations from seven monitoring buoys with recent CryoSat-2 data and concluded that “new ice only formed very slowly due to the particularly warm winter. If we compare the ice thickness map of the previous winter with that of 2012, we can see that the current ice conditions are similar to those of the spring of 2012 — in some places, the ice is even thinner.”

Atmospheric energy transferred into Arctic regions appears to cause disproportionately faster increases in temperature. NASA’s Goddard Institute for Space Studies reports the Arctic has warmed at about twice the rate as the overall global temperature during the last four decades. This background warming was punctuated by the exceptionally warm winter season of 2015/2016.

During the period between early and mid-April 2016, sea ice in the Beaufort Sea began a rapid, irregular decline. 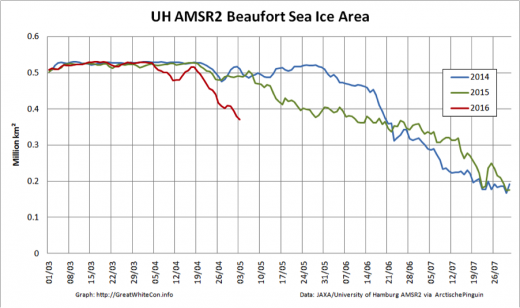 Scientists at the Denmark Meteorological Institute (DMI) recently announced Greenland’s ice sheet has begun melting about two months earlier than normal. The researchers consider melting season as the date when at least 10 percent of the surface of the ice sheet begins to melt. 2016’s onset of melt initiated April 11, with about 12 percent of the ice surface undergoing at least one millimeter of melt. The former record for ice melt onset was May 5, 2010.

Some of the models produced by the Intergovernmental Panel on Climate Change (IPCC) indicate that the complete melting of summer sea ice may directly contribute to “one-third of the warming of the Northern Hemisphere and 14 percent of total global warming by the end of the century.” The rapid melting of both Arctic sea ice and Greenland’s ice sheet appear as warnings of abrupt, severe climate change.

In response to consistently ineffective action in the limitation of greenhouse gases and carbon removal, many scientists have become directly involved in public outreach, education and action.

Ongoing results are shared and discussed by international experts in a variety of online forums. Researchers from specific fields including geophysical, meteorological, marine, climate, and cryospheric sciences compare data and build forecasts for future conditions.

Additionally, University of Ottawa ice researcher Paul Beckwith has announced through personal messages posted in blogs and YouTube videos that we are currently in the midst of a global abrupt climate change emergency. Regardless of the exact date of the first ice-free Arctic, the consequences of rapid climate change have become increasingly obvious and disruptive.

Ryan King teaches Environmental Science at Johnson and Wales University and writes on a variety of global change topics.