Indonesia’s declaration as to what actions it intends to take under a new global climate agreement, set to be hammered out this December in Paris, is “not fit for purpose,” Greenpeace asserted in a recent statement.

Two weeks ago, Indonesia promised to cut emissions growth by 29 percent by 2030, the highlight of its country commitment, or Intended Nationally Determined Contribution, for the 2015 United Nations Climate Change Conference scheduled for later this year.

The INDC was vague in places, but the new target seemed like an improvement over Indonesia’s previous commitment, made in 2010, to cut emissions growth by 26 percent over projected business-as-usual levels by 2020 based on actual 2005 emissions.

Greenpeace says while the “29 percent by 2030” target is vague and still needs be cleared up, it appears to actually be a step back from the earlier commitment.

That’s because moving the temporal goalposts back by so many years more than negates the slight uptick in the growth percentage to be reduced.

“The 2020 26 percent target would genuinely reduce emissions, but the new target of only 3 percent additional emissions reduction by 2030 abandons this improvement to return to a rapidly rising emissions trajectory,” Greenpeace said. 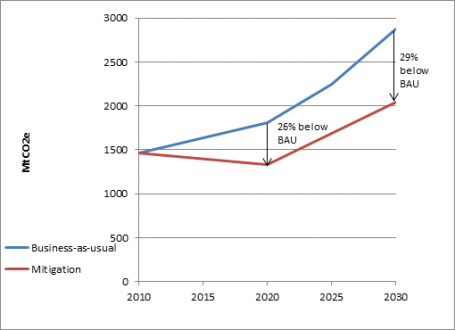 Greenpeace also criticized the government’s position on deforestation, which many large corporations have committed to eliminate from their supply chains due to pressure from consumers and green groups appalled by widespread forest destruction in Indonesia and other countries. Indonesian law protects some types of forest, but not others, with officials arguing that the economy would suffer if no forests could be cleared.

Greenpeace said that while the penultimate draft of the INDC says Indonesia “aims to ‘protect its remaining forests by increasing efforts in the implementation of palm oil industry no-deforestation commitments,’ in the final draft – published just four days later – this disappears and is replaced by the largely meaningless ‘protect its remaining forests by reducing deforestation and forest degradation’.

“This removal of even an indirect commitment to support zero deforestation came in a week of press statements by various officials backing away from forest protection. … Taken together, such statements and the change to the draft INDC show an intention to continue forest destruction.”

Greenpeace further pointed to a lack of published data behind the government’s claims and projections.

In conclusion, the organization called the current INDC draft “a distraction from the real issues Indonesia and the world face as a result of climate change” and a government PR exercise [that] obscures rising deforestation rates, ignores the terrible climate pollution resulting from the destruction of millions of hectares of peatland and singularly fails to propose genuine solutions for the climate, biodiversity and community development.”