US ambassador reiterates commitment to controversial Okinawa air base, a setback for endangered dugong 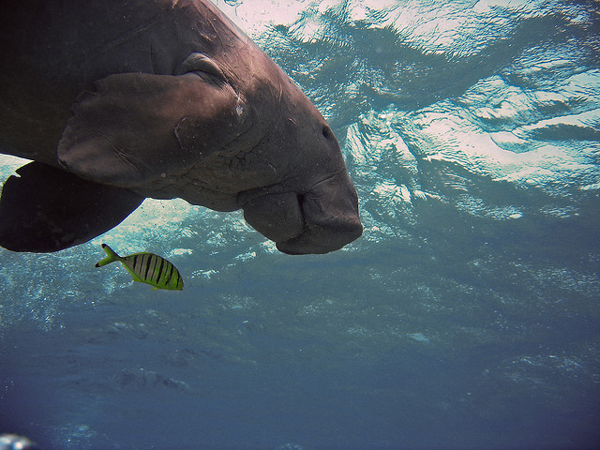 A dugong in Egypt. The species, a relative of the manatee, faces threats across its wide range, which includes 48 countries. Photo credit: Matthijs.

Okinawa, Japan’s southernmost prefecture, has a long history of US military presence on its tropical islands. This presence has not always been universally welcome. A longstanding plan to relocate the major Futenma airbase from the urbanized northeast of the island to a coastal site in Henoko Bay in the less-populated north has provoked the ire of many local residents, the local government, and numerous NGOs. They claim the development, which is in preparatory stages, will cause catastrophic environmental damage and seal the fate in the region of the iconic dugong (Dugong dugon), an elusive and gentle herbivore that is a cousin of the manatee.

Hopes of a long-awaited breakthrough were raised recently when it was announced that Caroline Kennedy, the US ambassador to Japan, was scheduled to meet Takeshi Onaga, the governor of Okinawa who was elected last November on a platform of opposition to the US plan.

But hope soon turned to frustration. In a statement issued by the US embassy in Tokyo following the meeting on June 19, Kennedy reiterated that the Henoko location remains the “only solution” for the new Marine Corps air base as far as the US is concerned. For his part, Onaga claims that the ambassador has not responded to a request from the prefectural government to conduct environmental research in the waters around Henoko that are currently controlled by the US military. 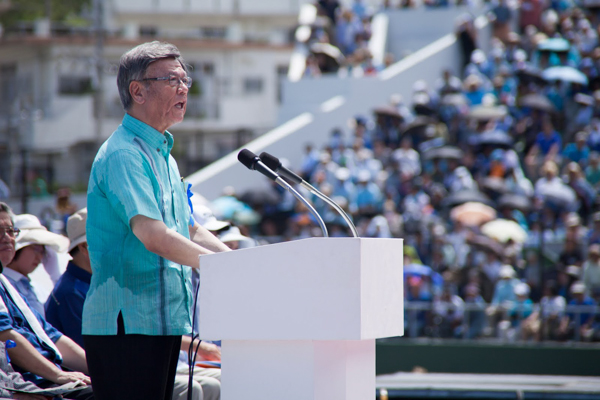 Okinawa’s governor, Takeshi Onaga, addressed an estimated 35,000 protesters opposed to construction of the new air base in the city of Naha on May 17, 2015. Onaga was elected on an anti-air base platform last November. Photo credit: ©Greenpeace / Kayo Sawaguchi.

“We are very disappointed that the US ambassador has not listened to the growing opposition in Okinawa, across Japan and around the world," Greenpeace Japan’s communications director, Yuki Sekimoto said after the meeting. Greenpeace is among the groups that have been campaigning for years against the base, organizing large protests that have seen thousands of demonstrators in kayaks descend on the Camp Schwab military base near the planned construction site. Ahead of the meeting, the group presented a petition with more than 53,000 signatures urging the US to halt construction.

Battle lines have been drawn ever since the US announced the plan to move the facility way back in 1997. Backed by the current Japanese administration of Prime Minister Shinzo Abe, the US has long maintained that the Henoko Bay site is the only viable location for the new air base.

The project’s numerous critics claim that no proper environmental impact survey has been carried out and that land reclamation for the construction will destroy coral reefs and two major seagrass beds that serve as the only documented food source for the region’s dwindling population of dugongs. 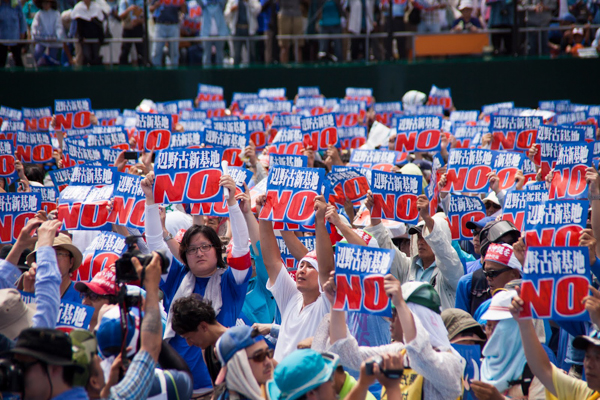 Protesters in the Okinawan city of Naha carry signs opposing construction of a new US air base on May 17, 2015. The base would threaten habitat critical for dugongs and is fiercely opposed by local residents. Photo credit: Greenpeace Japan.

The tropical waters around Okinawa and the Ryukus Islands represent the northernmost range of the species. Estimates of the number of dugongs remaining in the area range from an optimistic 50 (a number recorded in 1997 that pretty much no one believes to be accurate) down to as few as three.

Hideki Yoshikawa is the international director of the Save the Dugong campaign and an anthropologist who teaches at Meio University and University of the Ryukus in Okinawa. He told mongabay.com that although there are other seagrass beds in the region there is no record of dugongs feeding there.

As a result he said the area cited for the base is vitally important — for dugongs as well as for marine life in general. "The area of Henoko and Oura Bay is one of the most biodiversity-rich areas in Okinawa, with more than 5,300 marine species including some 260 endangered species," he said. "This area should be designated as a natural conservation area not as a military base and military training area.” 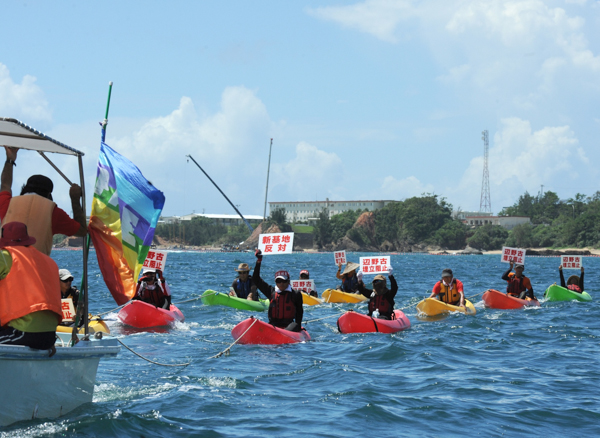 Kayakers rally against the construction of a new US air base in Okinawa in August 2014. Photo credit: Photo credit: ©Greenpeace / Kayo Sawaguchi.

The local plight of Okinawa’s dugongs reflects global pressures. Despite being found across a huge global range that encompasses 48 countries and an estimated 140,000 km of coastline, dugong populations are extremely fragmented with several, such as Japan’s, facing extinction. Threats include destruction of habitat, hunting, and marine pollution. The numbers of one population near the Andaman and Nicobar Archipelago in the Indian Ocean have reportedly declined by more than 50 per cent in the last 50 years, according to one study.

Ellen Hines, a professor of geography at San Francisco State University, is an expert on dugongs and the seagrass they feed on. She first assisted the campaign to save the Okinawan population when she conducted a survey on their movements in 2007 that established that the animals were feeding on the beds in Henoko Bay. She and colleagues from James Cook University in Australia and the University of the Philippines have helped teach locals how to track the behavior of the often-elusive creatures.

Despite what she described as criticism of her findings at the time by “scientists whose specialty was the arctic,” Hines told mongabay.com “there are dugongs in Henoko Bay and they are feeding.” She said such an isolated population at the northern extremes of a species’ range inherently faces diminished chances of survival. And the Okinawan dugongs are especially vulnerable because their numbers have likely been reduced by human activities, such as hunting, in the wake of World War II. 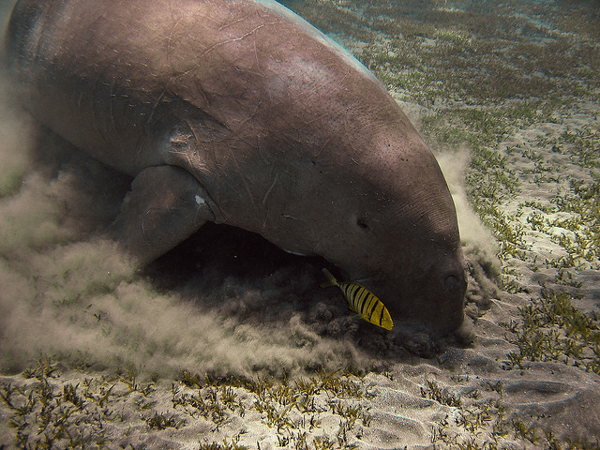 “We [the US] are failing in our stewardship of the environment," Hines said. "I think the US is pursuing something in Okinawa that it might not necessarily get away with in the US… There are examples of bases where work has been done to protect endangered species there.”

Locals say the mammal has deep cultural significance for the people of the region, a point that has featured prominently in the numerous legal actions that have been brought during the campaign to halt construction of the base.

“Our folktales tell us that gods from Niraikanai [afar] come to our islands riding on the backs of dugongs and the dugongs ensure the abundance of food from the sea,” Takuma Higashionna, an Okinawan scuba-diving guide, was quoted as saying as a plaintiff in a lawsuit brought by a number of Japanese and American NGOs last year against the US Department of Defense that sought to block construction of the airstrip. 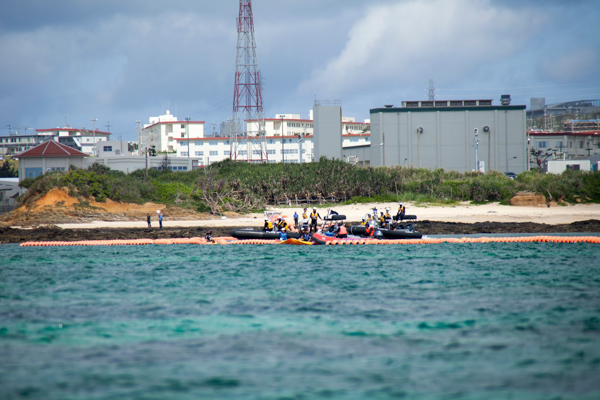 Japanese coast guard vessels approach kayakers near the US base Camp Schwab, where the new US airstrip is planned, on May 17, 2015. The kayakers are protesting construction of the airstrip. Photo credit: ©Greenpeace / Kayo Sawaguchi.

The suit was brought under a provision of the National Historic Preservation Act that requires the United States to avoid or mitigate any harm to places or things of cultural significance to another country. A US District Court in California rejected the case, but the plaintiffs, including the Center for Biological Diversity and Earthjustice, are appealing.

Caroline Kennedy’s affirmation that the construction work on the base will continue is another sign that the US and Japanese governments do not intend to bow to pressure anytime soon.

For Save the Dugong ‘s Yoshikawa, Kennedy’s refusal to acknowledge environmental concerns was disappointing but he says ultimately it is the government of Japan that has the power to change things.

However, for Hines the challenges facing the dugongs and their advocates are no reason to give up after such a long struggle.

“From the moment you saw the first legal case, ‘versus the US state department’ you knew it was a case of David versus Goliath,” she said. “I was really disappointed in the last court decision but it would break my heart if we give up now.”