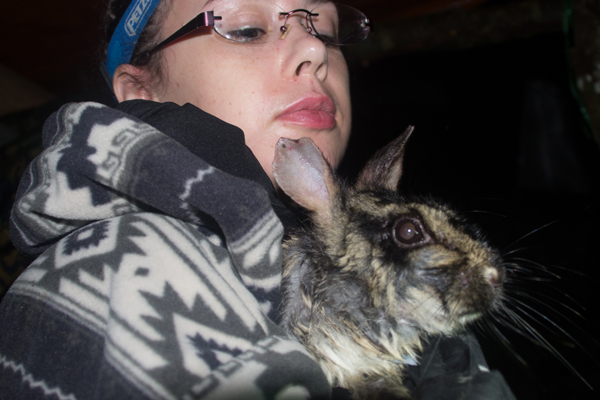 Sarah Woodfin holds a living Annamite striped rabbit in her arms, the first scientist to do so. Photo by: University of East Anglia.

Almost nothing is known about the Annamite striped rabbit (Nesolagus timminsi). First described by scientists in 1999, this beautifully-colored rabbit is found in Annamite Mountains of Vietnam and Laos, but—rarely seen and little-studied—it’s life history is a complete mystery. The rabbit’s conservation status is also wholly unknown leaving it classified as Data Deficient by the IUCN Red List. But Sarah Woodfin, a Master’s student with the University of East Anglia (UEA), got lucky when undertaking a three month research trip on this little-known lagomorph’s habitats in Vietnam. Really lucky. Woodfin found one…on the very first night.

“I didn’t expect that I would ever see one up close. I thought that if I was very lucky, I might see one from a distance in the forest,” said Woodfin. “I certainly never expected that I would have the opportunity to hold one of these magnificent animals. I was utterly delighted. My team and I encountered the rabbit completely by chance on the first night of my trip.”

Now, Woodfin has the distinction of being the first researcher in the world to actually hold an Annamite striped rabbit in their arms.

“I have kept pet rabbits since I was five years old so I knew how to handle it safely. It was a lifetime experience,” she said. 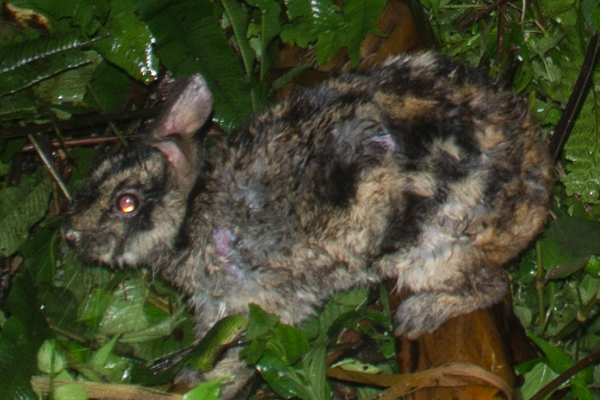 The Annamite striped rabbit is listed as Data Deficient because researchers know so little about it, though suspect that the species is imperiled due to deforestation and hunting. Photo by: University of East Anglia.

Woodfin’s team found the rabbit “hopping along a stream bank eating vegetation.” One of the team then “managed to catch it and brought it back to camp, where we were all able to have a good look at it.”

The team, supplied by WWF Vietnam, were able to take video, photos, and important measurements of the animal before setting it free again.

“The rabbit was very handsome, with dark stripes against a pale gold background and a red rump,” Woodfin said, adding, “I had never expected to get so close to the species but it was necessary to take its measurements. The rabbit was bigger than I had anticipated, but light and delicate.”

Over the next three months, Woodfin conducted research on the species’ habitat and vegetation needs in a WWF conservation area.

“Sadly there is a possibility that this species could be at risk of extinction due to deforestation and hunting,” she said. “It is therefore extremely important that we understand as much as possible about this species so that we can evaluate its conservation status and implement appropriate conservation measures.” 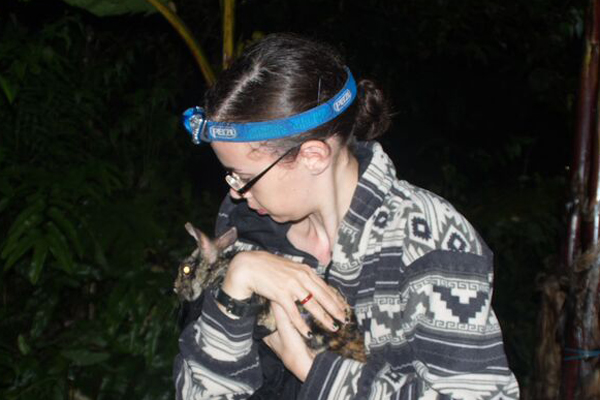