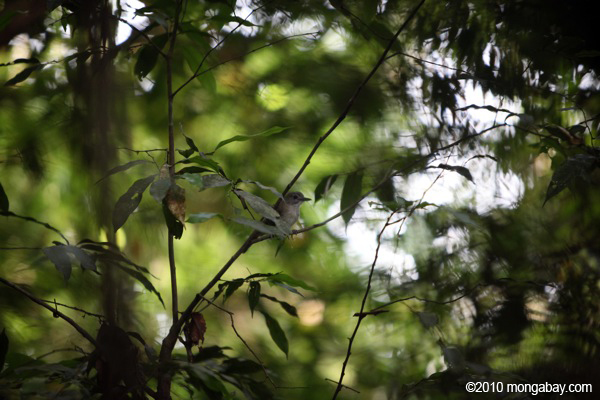 Market prices can provide an equally reliable indicator of wildlife declines as field data for a thirtieth of the price, according to a new study analyzing Sumatra’s pet bird trade.

The researchers, from Princeton in the United States and Bogor and Medan in Indonesia, published their findings in Biological Conservation last month in a study titled “Using market data and expert opinion to identify overexploited species in the wild bird trade.”

First, the researchers surveyed ornithologists about which Sumatran bird species were declining and increasing in the wild.

Then they compared the results with market data in Medan, a hub of the Asian wildlife trade with more than 200 birds regularly sold.

The researchers found that species that were increasing in price but decreasing in trade volume were likely to have been identified by the experts as undergoing population declines.

By the same token, birds with falling prices were likely to have stable or increasing populations.

The findings indicate a much cheaper way to collect data on the impacts of the wildlife trade, which are poorly known “because monitoring of wild animal populations is expensive, localized, and requires specialized scientific expertise,” according to the report.

Field sampling in Sumatra required six weeks of continuous supervision by Indonesian scientists in the wild. It collected data on 107 species and cost about $3,100.

Market monitoring required just four market visits in as many months. It gathered data on 120 species and cost $120.

“Ideally, data on price, volume, and the locations where animals are sourced would be collected systematically and stored and accessed via a secure website, thereby allowing multiple individuals and organizations to contribute to and utilize the information for conservation purposes,” the study reads.

“Long-term collection of market data could provide countries with sorely needed information to better implement domestic trade regulations and the Convention on International Trade of Endangered Species of Wild Flora and Fauna (CITES).

“Our use of market data in this study to identify species in trouble is best viewed as a proof-of-concept, which, we hope, will be followed by other studies of markets for birds and other vertebrates.”