Executives from palm oil giants Wilmar, Cargill and Golden Agri-Resources (GAR) appeared at a green investment summit in Jakarta this week, providing a window into the nature of a high-profile, joint sustainability pact the companies have entered into together with Asian Agri, Musim Mas and the Indonesian Chamber of Commerce and Industry (Kadin).

The agreement, known as the Indonesia Palm Oil Pledge (IPOP), has been lauded in some quarters for its potential to transform the sector, a major driver of the country’s sky-high deforestation rate, and dismissed in others as mere lip service to protecting the environment.

Despite the IPOP firms’ control of at least four fifths of global palm-oil refining capacity, questions remain about how much influence they can exert over their vast, often opaque supplier networks.

“These are complicated, fragmented supply chains, so a lot of these buyers – and they’ll admit it – they don’t know who they’re buying from,” Andrew Bovarnick, the head of the United Nations Development Programme’s (UNDP) global Green Commodities’ Program, told Mongabay on the sidelines of the Tropical Landscapes Summit on Tuesday.

Antitrust concerns also loom over the pledge, with some from among the companies suggesting they might not be able to cooperate to the extent necessary to realize their ambitious goals.

Asked if he was worried about violating competition guidelines, perhaps via a collective blacklist of problematic suppliers, Wilmar’s chief sustainability officer, Jeremy Goon, answered, “Yes. And if someone wants to come up with an issue with that, they can. … Of course there are concerns.” 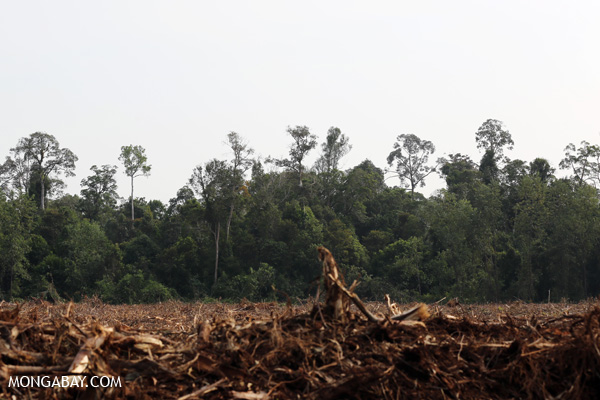 Clearing for a plantation in Riau, Sumatra.

The novelty of the IPOP, whose members already have their own zero-deforestation commitments, is the inclusion of Kadin and the obliging of the signatories to lobby the government to codify the elements of the pledge into law. At present, the agreement offers greater protections than does Indonesia for peatlands and high-carbon stock (HCS) forests.

At the summit, the executives called on the government to change regulations that hinder their attempts to eliminate deforestation from their supply chains.

One much-maligned policy treats areas set aside by companies for conservation purposes as “abandoned land” and gives the state the right to take it back and award it to someone who will develop it.

A GAR subsidiary faces that very prospect in West Kalimantan’s Kapuas Hulu regency, where a tract it designated as HCS “is being considered by the regent to be taken from us because we are not going to turn it into a plantation,” Agus Purnomo, director of Sinar Mas Agro Resources and Technology (SMART), said on a panel at the summit.

The executives also asked the government to improve its policy on land swaps, which would help companies shift their operations from forested to degraded land. 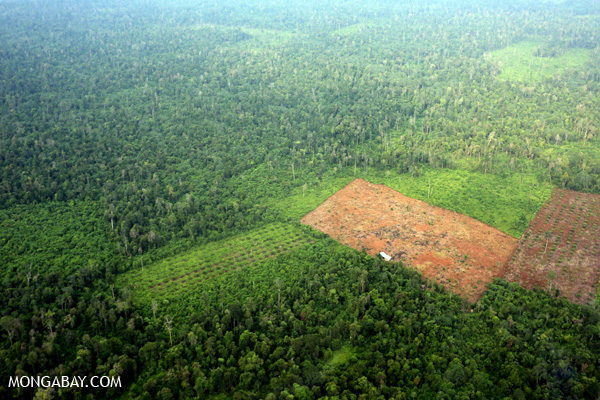 Can’t do it alone

Some question how far the companies are really willing to go. Greenpeace, for example, wonders why the firms haven’t joined mounting calls to strengthen Indonesia’s forest exploitation moratorium, which leaves some peat unprotected.

Goon and Guillot’s answers are that their companies are less focused on peat than on other, more pressing matters, such as fixing Indonesia’s chaotic spatial planning regime and supporting the One Map initiative, which aspires to create a single, all-encompassing map of the archipelago with all relevant information on licensing and land-use claims.

“The number one type of lobby that we’re doing with the government is, can we please try and make sure that [the] Forestry [Ministry], NGOs, industry participants are working with One Map?” Guillot told Mongabay.

“It’s not like the One Map is going to solve all the problems,” he continued. “It’s just that until you actually have a common denominator, it’s really difficult to get any sort of meaningful progress because you’re not speaking the same language.”

He added that while peat was clearly important, the One Map was more important, in part because conflicting land-use claims are a prime cause of social conflicts and an impediment to securing indigenous peoples’ rights.

The executives also tempered suggestions that the IPOP companies’ combined weight was powerful enough to transform any aspect of the industry toward which it was exerted.

“As long as [producers] can find an outlet which will take their oil, they can choose not to sell to me, and that means they don’t have to change,” Goon explained. “So the trick is to get as many people to have the same policy as ourselves.”

Guillot said consumer companies like Unilever and Nestle needed come on board as well.

“It’s only seen as five big guys doing it – it’s not the smallholders, it’s not the consumers, and that does in fact weaken the advocacy potential of the group,” he said. “We’re working on that right now.”

Adam Schwarz, president of Asia Group Advisors, said he wasn’t sure he agreed with the notion that the IPOP needed even more of the market to make sustainability non-negotiable for independent growers.

“Eighty, 85 percent – if you’re a small producer of palm oil, that doesn’t leave you a lot of alternatives,” he told Mongabay. “For me, I think it’s quite an accomplishment that they’ve been able to get that percentage of the refining capacity on board. Change can happen with a lot less leverage than that.”

Schwarz did not see much in the way of antitrust concerns, especially because Indonesia does not employ a very extensive antitrust regime. But he said questions about the exent to which the companies could work together were legitimate.

“Who you buy your palm oil from is proprietary corporate information,” he said. “So if the companies are going to share information about [the compliance of various suppliers], they’re going to have to come up with protocols or agreements to do that. The alternative being they’d have to each individually make that determination about each particular supplier, which takes longer and is more expensive.” 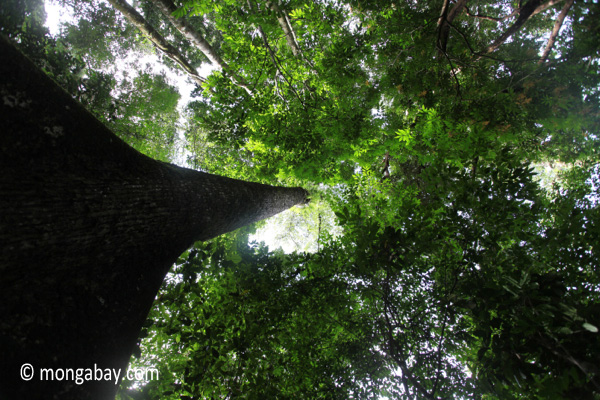 To reach out to other important players in the sector, the government has set up a national palm oil platform with UNDP support. The platform is part of the UNDP’s Sustainabile Palm Oil Initiative and anchored in the Ministries of Agriculture and of Environment and Forestry.

“The government has been playing a role, but they’ve been doing it an isolated manner,” Bovarnick said. “This is allowing the government to sit with NGOs, with the market, with the producers, and hear their opinions about what needs to be changed, what laws need to be changed, and work with those actors to create these changes.”

Four working groups, each headed by a director-general in the Agriculture Ministry, have been established, and additional provincial-level platforms, probably in Riau and possibly also in West Kalimantan and South Sumatra, are also in the works.

Part of the agenda will help the government harness big companies’ best practices to improve smallholder productivity, an area in which companies like Wilmar and Cargill, who buy much of their palm from small growers, have a big interest.

If the government can improve smallholder productivity, the logic goes, growers will exert less pressure on Indonesia’s dwindling forests, and the reputation of Indonesian palm oil will be better for it.

“Even if the companies happen to be producing in a deforestation-free manner, if the smallholders are still deforesting, they may get tarred with the same brush,” Bovarnick said. “So if markets in Norway or the UK start banning palm oil products from Indonesia because there’s a mass perception, then it also affects these companies who might have actually changed their practices.

“It’s a bit more indirect, but there is a sort of win-win there. The more that the palm oil that is being produced in Indonesia is deforestation-free, the better for the sector.”