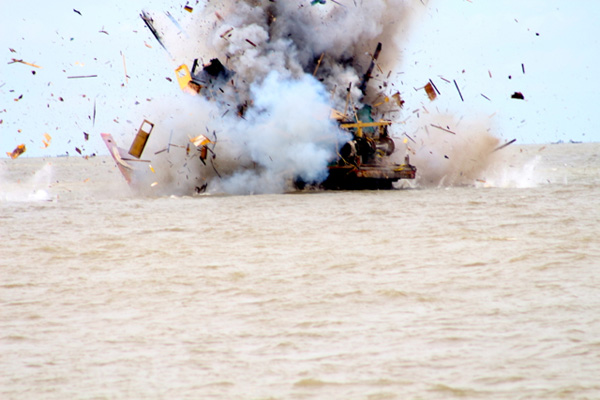 A Malaysian-flagged vessel was blown up in the waters of Belawan for illegal fishing in Indonesian waters. Photo: Ayat S Karokaro.

“This was on the president’s request,” said the minister, Susi Pudjiastuti, who presented the event as an “anti-illegal fishing” action.

“We are serious about our oceanic resources becoming a source of success for our fishermen and fish. This is impossible if the fish are already taken, even if we give fishermen fish, nets and better fish-catching technology.”

The mass sinking brings to 60 the number of boats the new administration of President Joko “Jokowi” Widodo has scuttled on charges of illegal, underreported and unregulated (IUU) fishing, for infractions like using trawlers or fishing without proper documentation. The boats sunk yesterday include five from Vietnam, two from Thailand, 11 from the Philippines and one from China.

In an act of ironic repurposing, the boats were downed with relatively weak explosives in order to maintain their shapes as underwater fish-aggregating devices, Asep Burhanuddin, the ministry’s director-general of monitoring, said in a statement.

“The hope is that the sunken boats will act as new habitat for the fish in the area they were sunk in and therefore contribute to marine conservation,” Asep said.

IUU fishing is rampant in Indonesia, a sprawling archipelagic country with 81,000 square kilometers of territorial waters. The environmental implications of IUU are troubling. With two thirds of the world’s marine biodiversity, Indonesia is home to some of the planet’s most incredible underwater ecosystems.