Of leopards and lemons: Superstition aids wildlife researchers in India 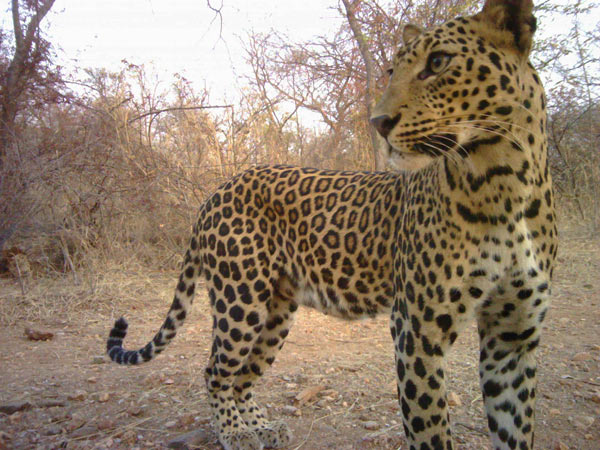 Many Westerners see science and superstition as lying at extreme ends of the logic spectrum. However, those familiar with India know that these two seeming strangers can walk hand-in-hand: Information technology companies are inaugurated with the breaking of the ceremonial coconut and pumpkin. Vehicle drivers purposefully run over lemons on Ayudha Pooja, a south Indian festival to celebrate the victory of good over evil. And the ubiquitous Lord Ganesha is often invoked when elephants raid a sugarcane field.

Scientific endeavors too are aided by the Indian people’s respect for local customs, traditions and superstitions. In one research project, forest officials sprinkled saffron water around a forest restoration site to prevent encroachment by local people. Saffron water is considered sacred in some parts of India and this invisible ‘fence’ can be more powerful than a physical wall. Some would even argue that wildlife conservation succeeds in India partly due to the people’s deep-rooted religious and cultural reverence for nature. 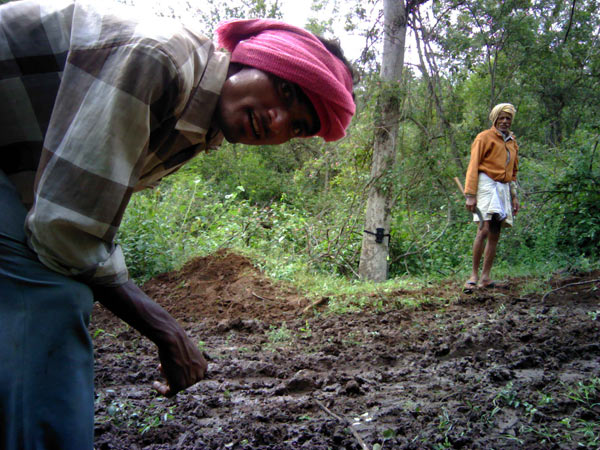 Unfortunately, the cameras were vulnerable to timber smugglers and poachers, who didn’t want their activities recorded. They were also possibly of interest to souvenir-hunting villagers. Most camera security devices proved to be prohibitively expensive. Chains and padlocks helped to a degree, but the vastness of the study area and its inhospitable terrain made it impossible to effectively guard all the cameras all of the time. After 15 costly cameras went missing or were destroyed — along with their invaluable photographic data — the researchers were forced to innovate.

In a flash of what some might call divine inspiration, the frustrated field team decided to erect a ‘social fence’ of sacred symbolism around the cameras. In India, sliced lemons stuffed with blood-red vermillion powder are often used in black magic, and are viewed with fear and avoided. So the team tied appropriately altered lemons to camera traps in an attempt at preventing theft and damage. Most villagers coming across a black camera trap have never seen one before, and are not sure of the nature of what they are seeing. The lemon, the researchers surmised, would make it appear even less appealing.

“I wanted to try a new method, and was hoping it would have some effect as people from rural areas are known to have strong beliefs,” says lead researcher Sanjay Gubbi.

“We will never really know how many thefts we have prevented by tying lemons to the cameras, but it really does seem to be working,” says field team leader Harish Nagashettihalli. “Of course, goats and monkeys eat some of the lemons, but this was the most cost-effective way of protecting the cameras.” 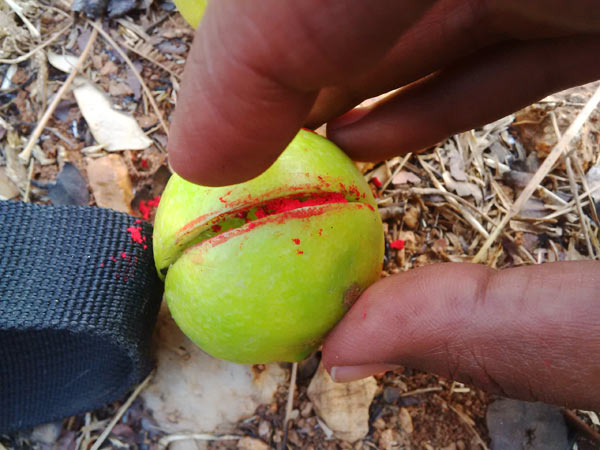 Creating a little black magic: vermillion is stuffed into a lemon before it is tied to a camera trap. Photo credit: Trupthi Narayan.

Field study situations are often complex and volatile, with multiple actors at play. Researchers must often deal with overlapping and conflicting layers of state and local authority, tensions over community forest rights, and changing power dynamics. That’s why the leopard researchers felt the need to tread carefully, making sure their study was as non-invasive as possible, and that it would not disturb existing social systems and hierarchies that would stay in place long after they went home.

“We were forced to look beyond conventional lock-and-key safeguards,” says Gubbi. “I believe that it is very important to understand local customs while working in human dominated areas, and this knowledge can be advantageous in carrying out research.”

While invoking black magic seems to be warding off human thieves, the team is clueless as to how to deal with another bold camera snatcher, on whom religion, cops or locks have no effect. The researchers have recovered several photos of elephants either walking away with cameras or smashing them to bits. Perhaps an impassioned appeal to Ganesha, the elephant-headed god, may be their next best hope. 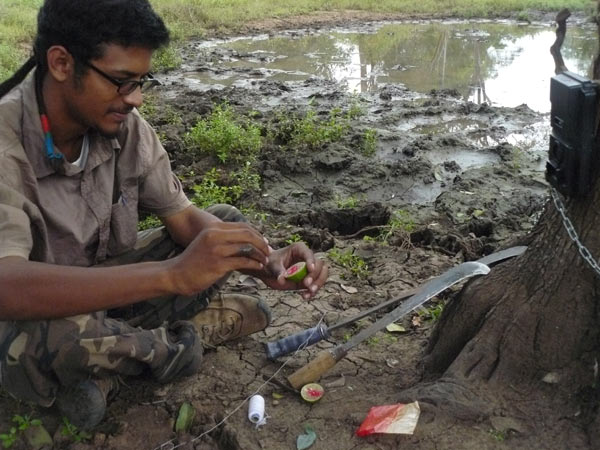 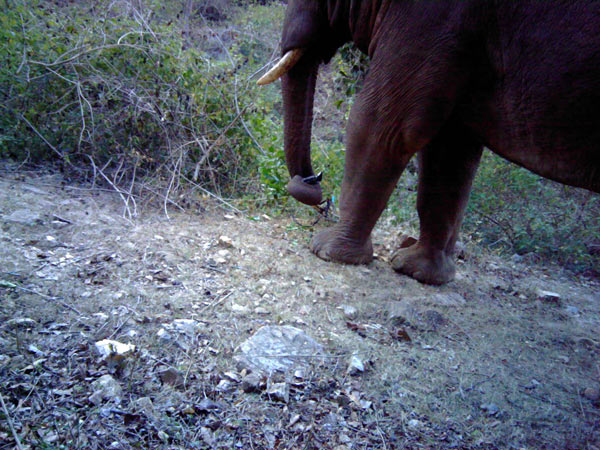 A camera trap records an elephant as it entwines a nearby camera trap in its trunk. Photo credit: Sanjay Gubbi/NCF/Panthera.