Conversion of peatland for an industrial plantation in Riau, Sumatra. Photo by Rhett A. Butler

A pair of local communities’ five-year slog to establish village forest management areas in Riau is the latest victim of a deadlock over the Indonesian province’s proposed zoning plan, whose long delay has been further exacerbated by the governor’s arrest in a bribery case.

On March 8, the expiration date of a earlier Forestry Ministry decision on the project, the Riau administration failed to deliver a crucial village forest management permit (HPHD), putting the project in serious jeopardy, if not dealing it a death blow.

The head of Riau’s Forestry Office told Mongabay he had asked the ministry for an extension, but it is unclear if one can be granted.

“If the governor doesn’t issue the permit, don’t blame us if people resume clearing the forest,” said Edi Saritonga, head of Segamai village’s Village Forest Management Agency (LPHD), which was set up to oversee the project. “We’ve tried to keep them from doing so.”

Indonesia’s village forest program licenses rural communities to manage nearby forests. It has been touted as a means to improve local livelihoods while reducing deforestation. 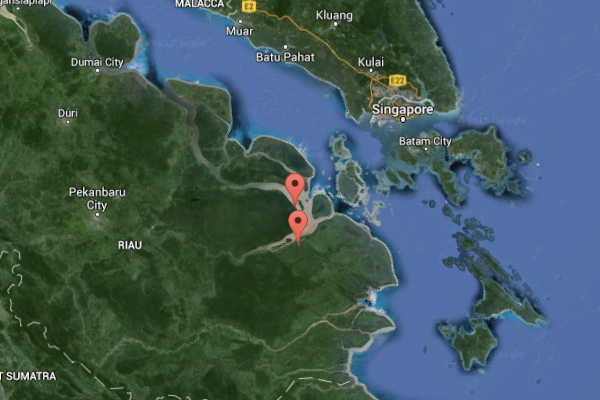 Google Earth map showing the location of Segamai and Serapung

Representatives of Segamai and Serapung, the villages in Pelalawan regency where the project was to be based, lobbied hard ahead of the March 8 deadline. Three days prior, Edi met with an official from Riau’s Integrated Licensing Agency (BP2T) who told him the HPHD decree had been drafted and was with the acting governor’s assistant. Edi also implored Environment and Forestry Minister Siti Nurbaya to compel acting governor Arsyadjuliandi Rachman to sign it promptly.

“It’s being processed,” Siti assured Edi by text message. “This morning I called the (acting) governor and it’s being signed. The draft of the decree is ready. My aide is monitoring the situation.”

On March 6, Herbert, Edi’s colleague from the Mitra Isani Foundation, a local NGO, visited the Riau Forestry Office to try to expedite the process. Two days later, Arsyadjuliandi called an emergency meeting in which he expressed a hesitancy greenlight the project because Riau’s spatial plan remained up in the air. 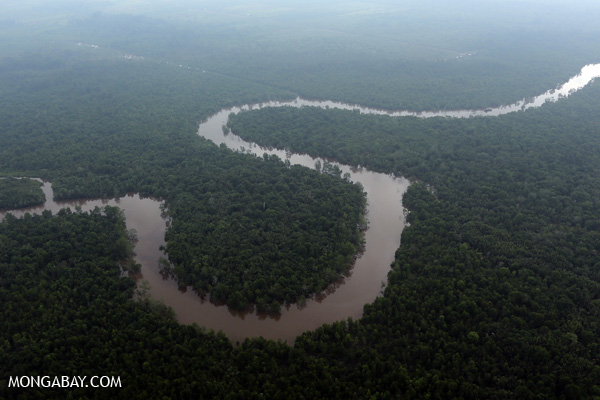 A lowland river meandering through peat forest in Riau. Photo by Rhett A. Butler

Herbert attributed Arsyadjuliandi’s cold feet to the psychological fallout of former Riau Governor Anas Mamun’s corruption conviction for his role in altering zoning to facilitate oil palm expansion into public lands. “This argument is always made by the chief of Bappeda (Riau’s Development Planning Agency) and the acting governor’s assistant,” Herbert said.

Neither did the acting governor’s other stated reason for withholding the decree – that the proposed village forests fell within a permit delay zone (PPIB) – pass Herbert’s muster. “I’ve never heard that excuse from them (until now),” he noted. “But at the time of the forestry minister’s 2013 decision, the PPIB was already up and running. This project is for environmental restoration activities.”

Herbert said he was worried because the Environment and Forestry Ministry had no clear timeline for endorsing Riau’s spatial plan, which has held up development projects for at least two years.