‘How about that extension?’ activists ask as forest exploitation moratorium deadline nears

Produced in English by Philip Jacobson

Less than two months before the expiration of an Indonesian forest exploitation moratorium set up under an agreement with Norway, activists called on Environment and Forestry Minister Siti Nurbaya Bakar to extend the prohibition, as she promised to do after taking office last year.

They also called on Siti to strengthen the moratorium, which bans new licenses for land-based exploitation in primary forests and on peat but does not address secondary forests and existing concessions and makes exceptions for “national development” projects – geothermal, oil and gas, electricity, rice, sugarcane – and any concession Siti’s ministry chooses to allow.

In Jakarta on Monday after a meeting with officials from the Coordinating Ministry for Political, Legal and Security Affairs, Siti reiterated her intention to extend the moratorium. 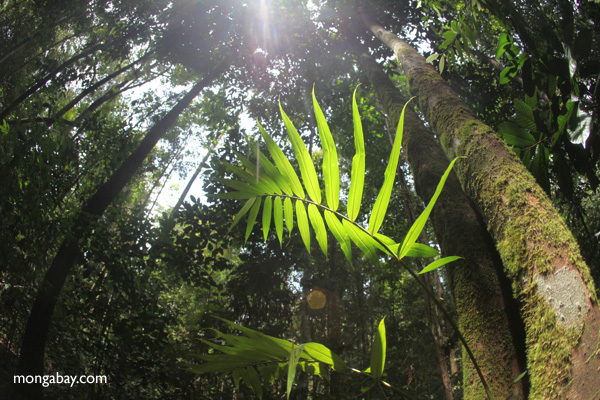 “We’ll continue it,” she said. “There shall be no new permits in (primary) forests and on peat.”

Siti explained that the ministry was still busy conducting a thorough review of existing licenses. “The permit review is still going on. There’s a review team and a wildlife audit. It’s in the process. This week I’ll get everything shipshape.”

Although Siti has pledged to extend the moratorium, a presidential instruction is needed to make it official. The deadline is May 15.

Greenpeace Indonesia campaigner Teguh Surya welcomed Siti’s commitment but called for loopholes in the moratorium to be expunged. Environmental activists in South Sumatra who covened on Monday concurred. Those activists also felt poor enforcement and a lack of coordination with zoning regulations had undermined the moratorium.

“What’s the point of a moratorium if it’s not entered in the spatial plan? Permits are issued based on spatial plans,” said Hadi Jatmiko, the director of the Indonesian Forum for the Environment’s (Walhi) South Sumatran branch.