Monkey sleep, monkey do: how primates choose their trees

Primates don’t monkey around when deciding where to spend the night, but primatologists have had a poor grasp on what drives certain monkeys toward specific trees. Now, two extensive studies of Indonesian primates suggest that factors in selecting trees each evening are site-specific and different for each species—and that some overnight spots result in conflicts between monkeys and humans.

“We have to understand what monkeys need [in order] to sleep to know what we have to protect,” said primate scientist Fany Brotcorne of the University of Liège in Belgium, leader of one of the research teams, in an interview with mongabay.com.

When monkeys choose their evening perch, they weigh more than just comfort. The main factors scientists suspect are safety from predators, distance to feeding grounds, human interactions, insect avoidance, and competition with other primates. 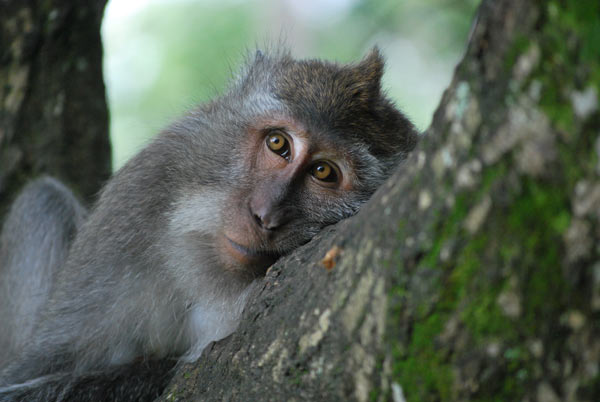 “Primates may be spending up to 12 hours at their sleeping sites, and yet we really don’t know much about them,” said Adrian Barnett of the University of Roehampton, in London, U.K., a primatologist not involved in the new work, in an email to mongabay.com.

Both groups noted the sizes and shapes of trees favored by the monkeys. Brotcorne’s group also measured the distance between sleeping sites and human outposts such as temples, tourist areas, or roads.

The proboscis monkeys returned each night to tall, isolated trees near rivers. The monkeys gather in trees that jut above the canopy to avoid predators and insects, believes Feilen. Predators can’t crawl from tree to tree toward the monkeys if the trees’ branches don’t touch. At the same time, the monkeys’ lofty—and windy—perches help them avoid malaria-ridden mosquitoes that tend to remain within the canopy.

“I think insect and disease ecology plays a bigger role in all these questions of primatology than we are all thinking,” said Feilen.

The long-tailed macaques snoozed away in trees near human-modified areas. Brotcorne suspects food availability was the main factor driving the macaques’ bunk choice. The monkeys scooted closer to a Hindu temple and tourist area where fruit, rice, and crackers abounded during the peak tourist season. The timing of their move also coincided with the start of the dry season and a decline in natural fruit production. The two teams reported their findings side-by-side this month in the American Journal of Primatology.

There is not just one evolutionary force influencing sleeping tree preference for primates, pointed out both lead authors.

“Both papers are significant in that they are showing the importance of sleeping sites in primate ecology,” said Barnett. “What is needed is a collation of data that is sufficiently broad to allow general theories to be put up [about sleeping tree selection].”

The distinct sleeping site chosen by the two species also influences the primates’ interactions with humans. Loggers preferentially remove the tall riverside trees favored by the endangered proboscis monkeys, threatening the species’ habitat, said Feilen. The proboscis monkeys she studied had to contend with deforestation by mining and palm oil companies. Also, local hunters knew where to find the predictable primates.

On the other hand, macaques and humans have competed for space and food in human-modified areas for centuries. But their close contact worries Brotcorne because diseases can cross from monkeys to humans and vice versa. Human food is not the healthiest diet for monkeys, she added.

“If you go to the tourist monkey forests, you will see obese monkeys,” said Brotcorne.

Leigh Cooper is a graduate student in the Science Communication Program at the University of California, Santa Cruz.