On the eve of the World Parks Congress in Sydney, the Australian government has just hosted the ‘Asia-Pacific Rainforest Summit’, a two-day event that brought together political leaders, academics, environmental managers and NGO staff in an effort to devise strategies to conserve endangered forests in the Asia-Pacific region. Here, Bill Laurance, a leading rainforest researcher, takes a critical look at the event. A version of this commentary appeared on The Conversation. The views expressed in this commentary are those of the author. 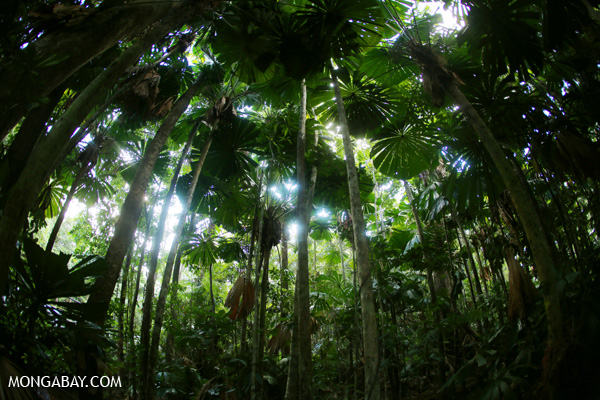 Fan palms in the Australian rainforest. Photo by Rhett Butler.

While the funding builds on legislation to ensure Australian goods are sourced legally, is this the deal Hunt was after to save rainforests? The summit was a Coalition election promise, highlighting the importance of slowing deforestation to combat climate change.

It preceded the World Parks Congress, a once-in-a-decade phenomenon that is drawing some 6,000 park aficionados, environmental managers and government delegates from around the globe to Sydney this week.

Greg Hunt has a tough gig. As environment minister for the right-leaning Abbott government, Hunt’s job is to advance environmental priorities in a cabinet that generally seems less interested in conservation and science, and more interested in economic growth, than any Australian government in recent memory.

As a result, Hunt seems more politically marginalized than his predecessors. Indeed, I suspect that, were Hunt to push too hard on environmental priorities — or fail to support the pro-coal, pro-mining, no-new-parks, anti-renewable-energy agenda of the Abbott government — he’d soon be gone.

In such a setting, where domestic policy is so clearly being driven by a growth-first agenda, what is an energetic environment minister to do? One “safe” strategy is to focus not on matters at home, but on those abroad.

That is precisely what Hunt and the Department of Environment did this week in Sydney with their Asia-Pacific Rainforest Summit. 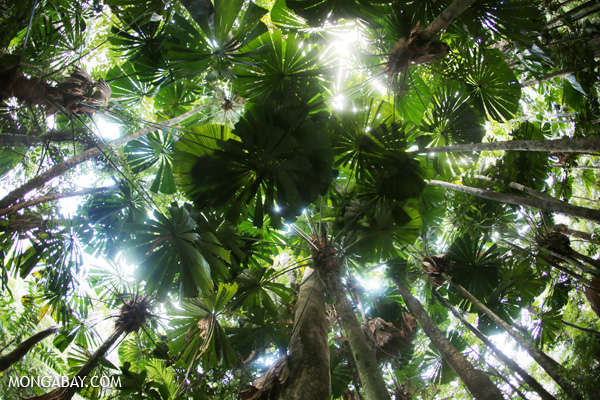 The forests of the Asia-Pacific region include some of the most biologically important and imperiled ecosystems on Earth.

The talks on day one focused on illegal logging, the growing use of satellite remote-sensing to monitor forests in real time, priorities for protecting
biodiversity, and efforts to integrate indigenous and local-community priorities into nature-conservation efforts (notably including Amazon expert Thomas Lovejoy, and chimpanzee conservationist Jane Goodall, who sent a personalized video).

For experienced observers, there were few surprises.

Day two was dominated by government ministers, ambassadors and other luminaries from a range of international organizations, such as IUCN, the International Tropical Timber Organization, Conservation International and WWF.

A plan to recover rainforests

Perhaps most notable was Hunt’s announcement that a key goal of the forum would be to draft an “Asia-Pacific Rainforest Recovery Plan”.

This was initially described in very broad-brush terms, and so I asked Hunt what he saw as its specific goals, and whether the government was planning to devote significant resources to it.

“This conference is all about building momentum,” he said. “But already Papua New Guinea, Indonesia and Vietnam have come on board with various commitments.” These included, Hunt explained, plans by each nation to reduce their annual deforestation rates by at least 50%, plus efforts to promote the recovery of degraded forests and landscapes. He also said the United States and IUCN had come on board the initiative as partners.

This sounds pretty impressive, but I felt a bit crestfallen when Hunt told me the government’s current commitment to the program: A$6 million, which will be used solely to combat illegal logging in the region.

That’s a drop in the bucket compared to the Coalition’s 2008 contribution of A$200 million for forest conservation in Indonesia and Papua New Guinea.

It’s also swamped by nearly $2 billion that Norway has invested since 2008 in tropical forest conservation, and Germany’s annual expenditures of half a billion euros for forest and biodiversity protection, over half of which is earmarked for the Asia-Pacific region.

One must hope the A$6 million announced today is merely intended to jump-start Hunt’s rainforest program. Indeed, Hunt hopes he’ll be able to drum up more funds now that the US and IUCN have come on board.

Let’s hope he succeeds. A well-placed attendee (who requested anonymity) cracked, “This proposal needs some Viagra.”

I also asked Hunt about Australia’s Illegal Logging Prohibition Act, as this will put teeth into efforts to combat illegal logging overseas. The act was passed in 2012 (prior to its passage I briefed a Parliamentary committee on the act) and it will finally come into force on November 30.

The act will require Australian firms that import or retail wood products from overseas to use “reasonable due diligence” to ensure they aren’t buying timber from illegal sources.

Hunt told me that Liberal Senator Richard Colbeck from Tasmania was overseeing the government’s implementation of the illegal logging act. So, I asked Colbeck, who was attending the rainforest event, about this. Colbeck made it clear that he had had to fight battles inside his own party to protect the act.

For instance, shortly after it passed, Julie Bishop, then the deputy leader of the Coalition, attacked the act while frequently quoting Alan Oxley, the former Australian trade ambassador who now lobbies against many environmental initiatives .

Given the Coalition’s rocky history of support for the bill, many are happy it has even survived. For instance, Jessica Panegyres, a forest campaigner for Greenpeace-Australia-Pacific, said, “For now we aren’t going too hard on the government because we welcome their decision to support the act. But we’ll be watching their implementation—because enforcement requires funds.” 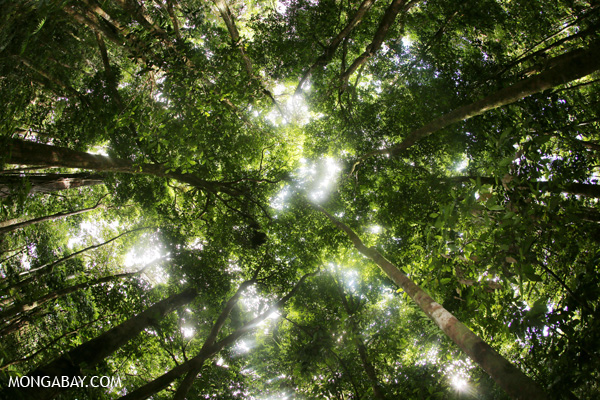 Conservation in the trenches

Hunt, no doubt, is relieved that the illegal logging bill has made it this far. If it’d been sunk by his Coalition colleagues then that would have undercut his efforts to promote forest conservation in the Asia-Pacific region.

Indeed, the government’s international credibility could have been so diminished that the rainforest summit this week might not even have happened.

As his rainforest fest draws to a close today, few doubt that Greg Hunt is sincerely interested in environmental matters or that his heart is in the right place.

But as environment minister he faces a delicate tightrope walk, given the raft of criticisms that have been leveled at the Abbott government over its
environmental policies (for example, see here,here,here and here).

It’s harder to ask your neighbors to clean up their back yards when you haven’t really tended to your own.