Indonesia’s rate of forest loss is now the highest in the world.

A concerted push by political elites to undermine Indonesia’s president before he even takes office could stymie progress on social and environmental issues in the country, say Indonesian civil society groups.

On July 9, former Surakarta (Solo) and Jakarta mayor Joko “Jokowi” Widodo beat ex-general Prabowo Subianto in Indonesia’s presidential election by 8.4 million votes. Yet despite the wide margin, Jokowi has been stung by a series of political setbacks that will hinder his ability to govern once he assumes office Monday. Prabowo’s Merah-Putih (Red-White) coalition now controls more than three-fifths of the seats in parliament, enabling it to pass measures that undercut Jokowi’s agenda. For example, in late September the Red-White coalition pushed through a bill to end direct election of local officials. Instead local leaders will be appointed by political assemblies, effectively blocking the path Jokowi took to higher office.

While it may be easy to dismiss the development as politics-as-usual, civil society groups are concerned that the strength and actions of the Red-White coalition could hurt the chances of Jokowi appointing competent people to head agencies and fill cabinet positions that govern land and resource use in Indonesia. Jokowi had indicated that he planned to fill these positions based on the expertise of individuals rather than their political affiliations, a sharp break from tradition. 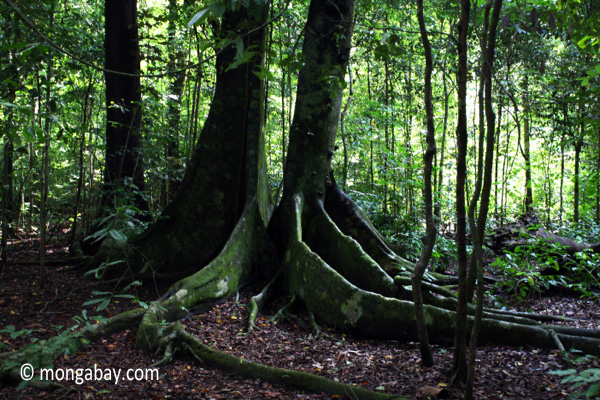 Rainforest on an island off Java

“It would be a very severe challenge for the new government.”

Peatland drainage and conversion for an industrial plantation in Riau Province in 2014. Photo by Rhett Butler

Both advocates feel that ending direct elections will hurt Indonesian democracy and could increase corruption.

“We’ve had safe and peaceful direct elections for more than a decade. There’s no reason to change it,” said Abdon. “Transactional politics will worsen. Democracy will become elite, expensive, and closed.”

“With no direct elections, big money politics and political horse-trading will increase,” added Ginting. “This is fertile group for corruption and will have an impact on political decisions by local governments.”

“They no longer need to consider the interests of the people — it will be more about personal and political party interests. Governors, regents and mayors will be less accountable to the public and less likely to work in the public’s interest, including the environmental issues.”

Environmental concerns are growing in prominence in Indonesia. Air and water pollution plague many cities, while large-scale deforestation and degradation of peatlands have increased scarcity of clean water, triggered subsidence, and exacerbated flood and drought cycles. Haze caused by fires set in drained peatlands have turned what were once local problems into international issues, earning Indonesia the ire of Singapore and Malaysia. Scientists and environmentalists, as well as donor countries like Norway, have raised alarms about carbon emissions and biodiversity loss.

Outgoing President Susilo Bambang Yudhoyono has attempted to blunt some of the criticism by pledging to curb greenhouse gas emissions and deforestation, but progress has been slow. A key element to that effort is bureaucratic reform within ministries that control forests, agriculture, and land use planning. An initiative to create a single unified map for all concessions and claims across Indonesia has also progressed gingerly. Civil society had hoped that Jokowi, with his strong-anti-corruption stance and meritocratic principles, could accelerate those processes once he took office. But with such strong opposition from deeply entrenched political interests, that now looks doubtful. 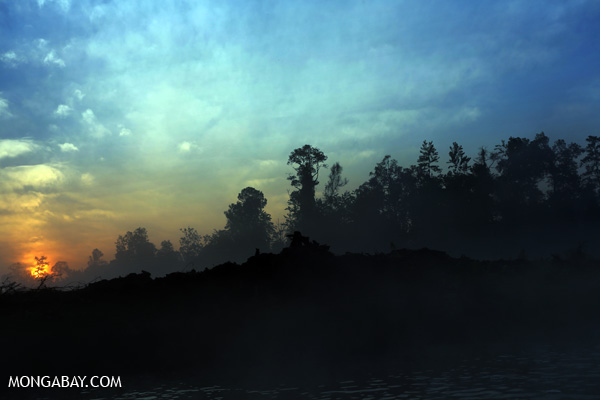 Sunset over a deforested area in Sumatra.

Still there are signs that pressure could come from outside politics. Several Indonesian companies that have established zero deforestation policies — including palm oil giant Golden Agri-Resources and Asia Pulp & Paper — recently called upon the government to be more supportive of forest conservation efforts. Indonesian politicians typically listen to the private sector, so if that push by early adopters leads to a broader groundswell, it could provide an important signal to the government at least as far an environmental issues are concerned.

The move to end direct elections is going to be a political education for people,” he said. “It will be a history lesson for politicians: do not underestimate the power of people.”