Imagine watching a tiger stalk a sambar deer, or catching a ghost-like glimpse of the rarely-seen saola, or monitoring a herd of peccaries in the Amazon rainforest—all from your desktop and in real time. Well, this may soon be possible under a new partnership with Google and the Zoological Society of London (ZSL), which will test TV white space to monitor zoo animals as a trial run for real-time filming of life in the wild.

TV white space, or TVWS, are the unused frequencies in the VHF or UHF bands, which can be harnesses as a wireless technology over long distances. The wireless technology has huge potential for bringing Internet to rural areas. But conservationists now believe it could also be harnessed to monitor little-seen species. In fact, the technology can even move through trees and water. They have dubbed the project Whitespaces for Wildlife. 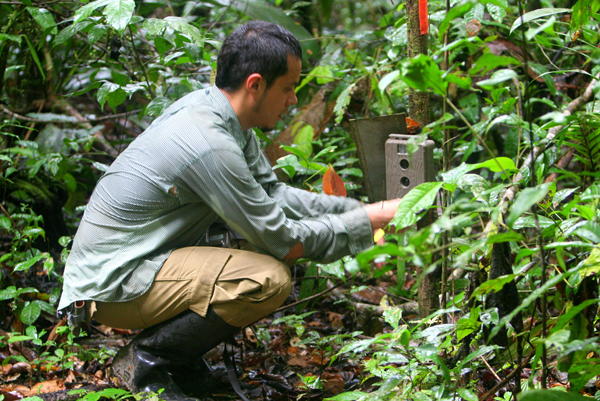 A researcher sets a camera trap in Yasuni National Park in Ecuador. Photo by: Jeremy Hance.

“Remote monitoring of wildlife is a vital conservation tool, from helping us to better understand a species’ behaviour to detecting activity such as poaching or illegal logging,” the project coordinator with ZSL, Louise Hartley, said. “The prototype systems at ZSL London Zoo are already demonstrating that they can transmit high definition video over long distances, confirming their invaluable potential to use wireless connectivity to transform ZSL’s worldwide conservation work.”

Monitoring of cryptic species has already been revolutionized over the past twenty years by the now almost-ubiquitous use of camera trapping. This employs remotely set-up cameras that take still photos or videos of wildlife when they set off a trigger by passing in front. But employing TV white space could enhance such techniques greatly, by allowing scientists to monitor cameras in real time and from very far away. As it is now, researchers have to routinely trek back into the wild to collect their camera traps and gather the data.

In order to test the technology, ZSL will begin streaming 24 hour live footage of otters, meerkats, and giant tortoises at its zoo to the YouTube channel, ZSLVideo.

“With projects in more than 50 countries around the world, ZSL’s conservationists work in some of the planet’s most difficult-to-reach areas, from the vast expanse of the Saudi Arabian desert to the dense jungles of Sumatra,” said Hartley.

The organization hopes the new technology will make monitoring these areas —and their rarely seen species —much easier. 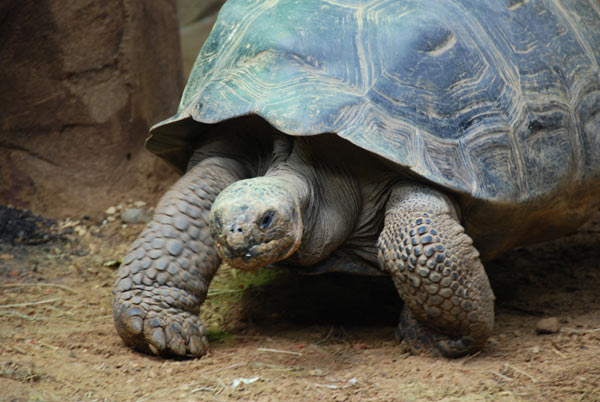 TV white space may revolutionize how conservationists monitor wild species. This Galapagos tortoise at the ZSL London Zoo will be a test subject during the trial period. Photo courtesy of ZSL.

(07/17/2014) Polar bears are big animals. As the world’s largest land predators, a single male can weigh over a staggering 700 kilograms (about 1,500 pounds). But as impressive as they are, it’s difficult to imagine counting polar bears from space. Still, this is exactly what scientists have done according to a new paper in the open-access journal PLOS ONE.

Next big idea in forest conservation? Rewards for reforestation

(07/10/2014) Susie McGuire and Dr. Edward Louis Jr. are the powerhouse team behind the Madagascar Biodiversity Partnership (MBP), an NGO that involves local residents—both human and primate—in reforestation efforts in Madagascar. A conservation geneticist and veterinarian by training, Ed Louis has discovered 21 lemur species and successfully reintroduced two species of locally extinct lemurs back into the wild.

Next big idea in forest conservation? Playing games to understand what drives deforestation

(06/26/2014) Dr. Claude Garcia plays games, but you won’t find him betting his shirt at the casino. As leader of the Forest Management and Development Research Group at ETH Zürich, Garcia and his team use participatory modeling and role-playing games, merged with more traditional disciplinary sciences such as ecology, economics, and sociology to understand and manage complex landscape change in the tropics.