Belitung Island has lost 10 percent of its remaining forests in 13 years, few protections in place despite biological importance

Belitung, a picturesque island off the east coast of Sumatra, has experienced an uptick in tourism recently due to its unspoiled white sand beaches and turquoise waters. But next to all of the beauty, an environmental tragedy is quietly unfolding: the island’s primary forests are being cut down at an alarming rate in favor of mining and palm oil plantations.

“From our investigations over the past 10 years in the Bangka-Belitung province, around 60 percent of deforestation has been caused by two factors: tin mining and the expansion of palm plantations,” said Ratno “Uday” Budi, the executive director for the Indonesian Forum for the Environment (Walhi).

According to the Global Forest Watch (GFW), Belitung has lost a total of 10 percent of its forest cover over the past 13 years. The island, together with neighboring Bangka, gained regional autonomy from South Sumatra in 2000 and became a single province. Uday says this split resulted in a vast expansion of tin mining activities. 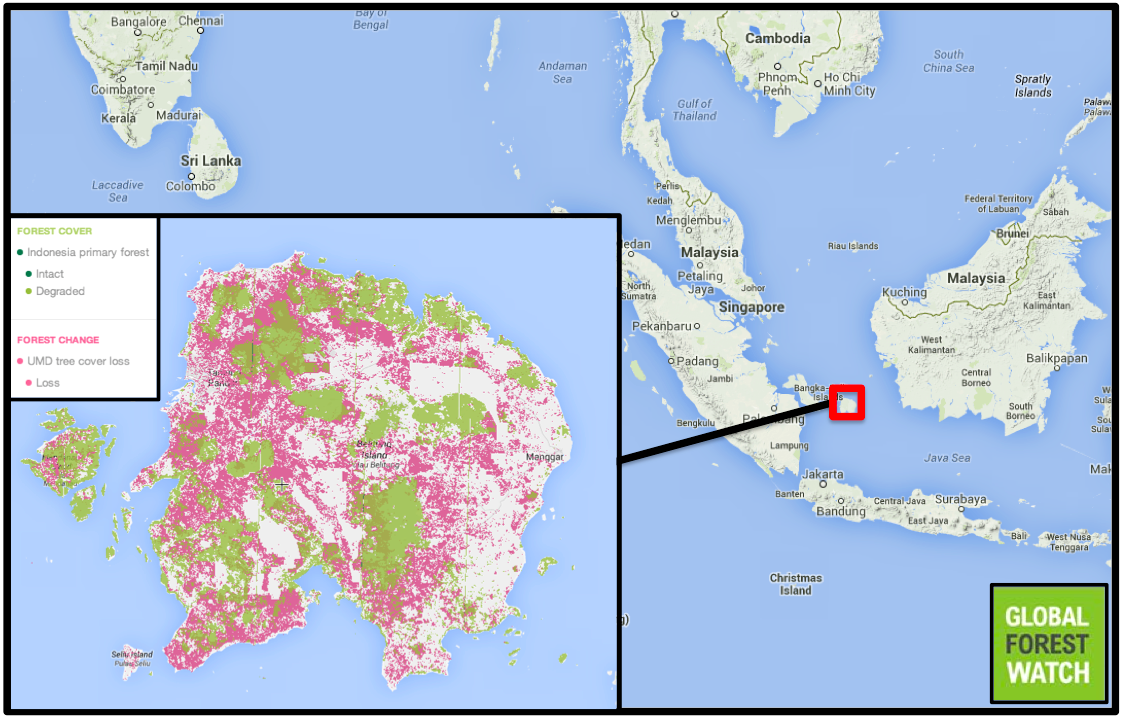 According to Global Forest Watch, Belitung Island lost approximately 88,000 hectares of forest from 2001-2013, representing about 10 percent of its land area. Clearing prior to 2001 for palm oil and mining removed much of the forest of the island’s eastern portion. Currently, the only thick primary forest that exists on the island has been degraded by human impact. Courtesy of Global Forest Watch. Click to enlarge.

The tin and other minerals stripped from Belitung are used in a slew of consumer electronics and have been linked to tech giants such as Samsung and Microsoft over the years. The industry has taken a major human and ecological toll on the islands, but it remains the lifeblood of the province.

Uday said that the eastern end of the island, an area that encompasses around 2,500 square kilometers, has experienced the worst treatment due to expansion of oil palm plantations and tin mining operations, with 70 percent of the forest area being cleared, including precious patches of mangrove forests. He added that the island’s deforestation and mining has made Belitung more readily impacted by extreme weather and other ecological hazards.

“In Bangka-Belitung, there has been 60 percent deforestation of the mangrove area,” he said. “Mining has led to flooding, contaminated rivers and rivers not functioning properly. Bangka-Belitung’s ecology has been affected.”

Its wildlife has especially felt the effects. The tarsier is a nocturnal, bug-eyed primate that is found all around Southeast Asia. But the Cephalopachus bancanus saltator, or the Belitung Island tarsier, is endemic to the island and thrives in a unique ecosystem that is particularly prone to exploitation.

The Belitung Island tarsier has been classified as Endangered, according to the International Union for Conservation of Nature (IUCN), “due to a severe restriction of its geographic range on Belitung Island; its extent of occurrence is less than 5,000 (square) kilometers, and known populations are severely fragmented.”

Indonesian researcher Indra Yustian has studied the island’s ecology in depth, and specializes in monitoring its tarsier population. His 2007 book “Ecology and Conservation Status of Tarisus Bancanus Saltator on Belitung Island” is a crucial text on a very rare animal.

“Although there are some Protection Forests on the island, which (are) mainly designated to preserve watershed and ecosystem functions, and despite the island being one of the endemism centers of the Sumatran region, there [are] no conservation area[s] on Belitung Island,” Indra wrote.

Uday said that Walhi has been monitoring the tarsier population, as well, but given the animal’s elusiveness, the organization has not been able to record any exact data on the species’ current population trend.

“We’re still checking on the population of the tarsier… with deforestation and the narrowing of the forest, they will be isolated, and it will affect their habitat and their breeding habits,” Uday said.

As far as a government response to the issue, the province promised years ago to curb deforestation and provide alternatives to residents outside of the damaging mining sector. However, little has been done.

“Addressing the tin mining issue is no easy task, because a large percentage of the residents rely on the tin mining sector, which they deem as providing material benefits,” Darmansyah Husein, the Belitung Regent from 2004 to 2013, told the Jakarta Post in 2009.

According to Uday, even today, the government has not held true to its word.

(07/31/2014) The Leuser Ecosystem in Aceh, Indonesia is gaining the attention of international animal traffickers, according to the Leuser Conservation Forum (FKL). From the beginning of 2013, FKL patrols have dismantled 282 makeshift traps targeting high value threatened species, and the situation is getting worse.

(07/29/2014) An Indonesian Stock Exchange-listed company whose commissioner is a member of The Nature Conservancy-Indonesia’s board has been clearing dense rainforest in New Guinea, finds a new report from Greenomics-Indonesia. The report is based on analysis of data from Global Forest Watch, NASA satellites, Indonesia’s Ministry of Forestry, and company documents.

(07/24/2014) Deforestation is compromising forests around the world, destroying vital habitat and causing greenhouse gases emissions that are contributing to global warming. A new report released today finds a possible solution: protecting forests by empowering the local communities that live within them.

A letter to Indonesia’s new president on his environmental policy

(07/24/2014) Congratulations on your successful bid for the Indonesian presidency. Although neither you nor your opponent spent much time focusing on the environment, the world hopes your previous record in Surakarta (Solo) and Jakarta, coupled with the idealistic language in your campaign platform, is evidence enough of your intent to slow the rapid destruction of Indonesia’s environment. It will be a long and challenging road, but the Indonesian people have entrusted their country to you based on the promises you made to them. The world looks forward to watching you enact policies that keep these promises.

(07/22/2014) The Government Regulation on Peatland Ecosystem Protection and Management, initially drafted by the Ministry of Forestry in 2013, is getting mixed acceptance from civil society. On one hand, the regulation would offer more protection to the country’s vast peatland areas. However, on the other, some NGOs have slammed the draft as a potential source of new conflicts for local people.