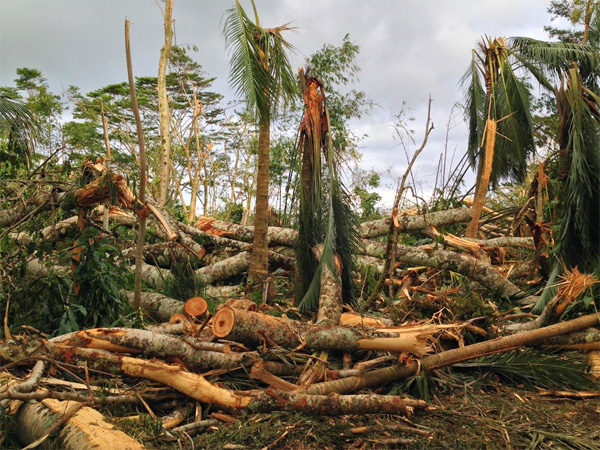 Damage from Hurricane Iselle, which recently battered Hawaii’s Big Island, was exacerbated by invasion of non-native tree species, say experts who have studied the transformation of Hawaii’s native forests.

Iselle, which made landfall on the Big Island on August 7, was the third-strongest tropical cyclone to hit Hawaii since 1950. It caused upwards of $50 million in damage, mostly from lost fruit harvest and impacts on infrastructure and housing. Much of the damage was caused by downed trees, many of which were invasive albizia and ironwood that have overtaken natives in Hawaii’s forest landscape.

The invasion of non-native tree species has long been a concern to ecologists, who fear the impact on endemic species and ecosystems, but damage from the storm has put a spotlight on the dangers and economic costs of invasives, which are apparently more vulnerable to high winds, according to Flint Hughes of the U.S. Forest Service.

“At least 95 percent of the trees that came down and caused damage were non-native trees and the vast majority (90 percent) of those trees were Albizia (Falcataria moluccana),” Hughes told Mongabay.com. “If native forests had not been replaced by Albizia and other non-native trees, the overall damage from Iselle would have been very minor. Nearly all the damage (including ongoing widespread power outages) was due to falling 35 to 40 meter tall albizia trees.”

Greg Asner of the Carnegie Department of Global Ecology agreed.

“Without a doubt, the native forest canopy in the lowlands, which is now in the minority of forests and is highly threatened by continuing land-use change, fared far far better than the non-native forests that are now widespread in the lowlands,” Asner told Mongabay.com. “In particular, the non-native, highly-invasive albizia and ironwood trees came crashing down in huge swaths of land — really big areas where mortality is 80% or more. You see none of that with the remaining native forest stands that are dominated by the keystone Hawaiian endemic canopy tree called ohia (Metrosideros polymorpha).” 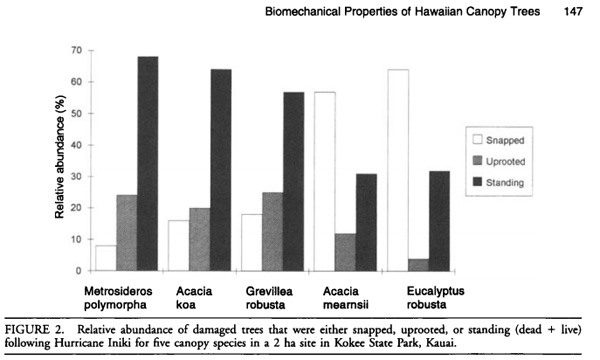 The problem is not new to scientists. After the hurricane Iniki devastated Kauai in 1992, Asner documented the proclivity of non-native trees to crash down during storms.

“I mapped the entire area with the Carnegie Airborne Observatory (CAO) before the hurricane, and we carefully calculated the height and biomass of the forests that have now been wiped out,” he said. “We are now scrambling to find support to either refly these forests to fully assess the impact on the ecology and carbon cycle, or to acquire high-resolution satellite imagery that can easily be used to ‘subtract’ the forest cover and carbon stocks from the previously acquired CAO maps.” 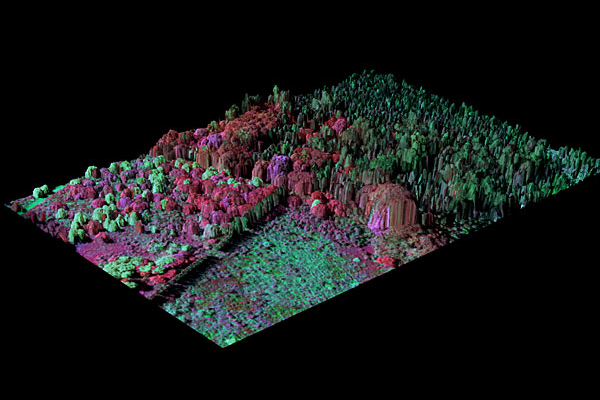 A 3-D image of a Hawaiian rainforest depicts the encroachment of two invasive tree species (represented in pink and red) upon the native trees (in greens and blues). The low vegetation in the foreground is an agricultural field. Courtesy of Greg Asner / the Carnegie Department of Global Ecology

Asner hopes that quantifying the damage caused by Iselle could provide a further justification for protecting and restoring Hawaii’s native forests.

“Without a doubt, this is another blaring indication that native forest restoration needs to be a number-one priority for the State of Hawaii,” he said. “It is not a fringe nature community or ecotourism issue anymore. It is an issue that is affecting people and their safety, and it is only going to get worse until the State and the citizens of Hawaii make native forest restoration a priority. The great thing is that everyone can participate; everyone has a role to play; it doesn’t take rocket science; it takes community effort.

“We have talking about the threats posed by Falcataria moluccana for years. One point that we make is that while we have many invasive species problems in HI, Falcataria is one that should be dealt with because it can actually Kill you. That has become obvious with Iselle.”

(11/26/2013) Technology that enables scientists to catalogue a rainforest’s biodiversity in stunning detail by airplane was highlighted in a recent TED talk. Speaking at TED Global in Edinburgh, Scotland this past June, researcher Greg Asner explained the science behind his ground-breaking forest mapping platform: the Carnegie Airborne Observatory (CAO), an airplane packed with advanced chemical and optical sensors.

Researchers produce the most accurate carbon map for an entire country