“Today marks a turning point for global cat conservation,” said Panthera Founder and Chairman of the Board, Thomas Kaplan, who added that the support of Abu Dhubai’s Crown Prince, Sheikh Mohamed bin Zayed Al Nahyan, “is a game changer, opening a path for us to create what has become an unprecedented alliance of philanthropists from Arabia, China, India and America, now united in a common cause.”

In addition to support from Al Nahyan, the other funders include Panthera’s founders, Thomas Kaplan and Daphne Recanati Kaplan; Jho Low, the CEO of Jynwel Capital; and Hemendra Kothari, Chairman DSP Blackrock India and the Wildlife Conservation Trust.

All around the world big cats are vanishing. African lions (Panthera leo) have fallen from around 100,000 to somewhere between 15,000-35,000 individuals in just 50 years, while a recent survey found that West Africa’s lions—a distinct subspecies—are likely down to just 250 individuals and on the edge of extinction. 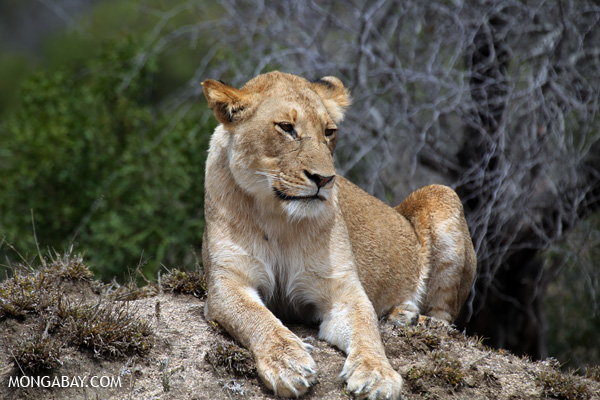 A lion in Kruger National Park in South Africa. Lion populations have plummeted in recent years and the West African lion is on the verge of extinction. Photo by: Rhett A. Butler.

Meanwhile, scientists believe that just 3,200 tigers (Panthera tigris) survive in the wild today, less than the number of tigers found in captivity in the U.S. Also, snow leopards are down to 3,500-7,000 individuals, and cheetahs to about 10,000 adults.

But big cats are also some of the biggest recipients of conservation funds. For example, a global Tiger Summit in 2010 raised $300 million for tigers. The summit was also notable for being the first high-level international meeting aimed at saving a single species.

Although founded in just 2006, Panthera has quickly become among the world’s leading conservation group working with wild cats.

(01/16/2014) Scientists knew that snow leopards (Panthera uncia) still survived in the Central Asian country of Uzbekistan, but late last year they captured the first ever photos. Camera traps in the Gissar Nature Reserve took photos of the big cats, along with bear, lynx, ibex, wild boar, and other mammals. The camera trap program was led by biologists Bakhtiyor Aromov and Yelizaveta Protas working with Panthera, WWF’s Central Asia Program, and Uzbekistan’s Biocontrol Agency.

(01/14/2014) At a summit in 2010, the world’s 13 tiger range states pledged to double the number of tigers (Panthera tigris) in the wild by 2020. Today, non-tiger state Germany announced its assistance toward that end. Through its KfW Development Bank, the German government has pledged around $27 million (20 million Euro) to a new program run by the International Union for Conservation of Nature.

(12/03/2013) Bigger than all of Brazil, among the harshest ecosystems on Earth, and largely undeveloped, one would expect that the Sahara desert would be a haven for desert wildlife. One would anticipate that big African animals—which are facing poaching and habitat loss in other parts of the world—would thrive in this vast wilderness. But a new landmark study in Diversity and Distributions finds that the megafauna of the Sahara desert are on the verge of total collapse.