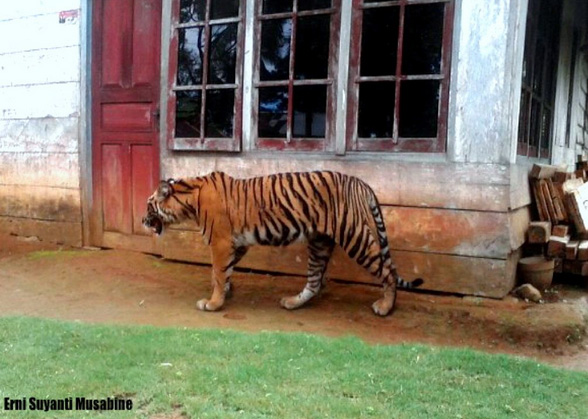 Sumatran tiger in an Indonesian village.

Conflicts between tigers and humans will continue to increase unless the destruction and loss of Sumatra’s forests is halted, warns Dr. Erni Suyanti Musabine, a wildlife conservation veterinarian with Indonesia’s Ministry of Forestry. According to Yanti, the critically endangered Sumatran tiger (Panthera tigris sumatrae) traditionally lived deep in the forest, but habitat loss forces them closer to human habitation where they are at risk of being hunted or contracting diseases, and are increasingly becoming a nuisance or threat to humans.

“Tigers are ordinarily solitary animals, but they are losing their fear of humans as they are forced to hunt closer to villages due to the decrease in wild prey,” Yanti told Mongabay. This proximity to villages presents tigers with appealing food sources such as goats, cows and other domesticated animals. In turn, the villagers respond by attempting to hunt or trap the tigers.

Yanti, an agile woman of slight build, received her veterinary degree from one of Surabaya’s leading Universities, and has worked as a wildlife veterinarian for 10 years. Since 2007, she has participated in over 12 tiger rescues in Bengkulu province in southwest Sumatra. Her team often finds the tigers caught in traps or snares—their health seriously deteriorated. During one rescue, Yanti was forced to amputate the foot of a tiger that could not be released from a trap.

If her team is called into a rescue, Yanti must respond, regardless of whether she is feeling tired or sick. Minutes count, as the team races to rescue the tiger before it dies from its injuries, or is taken by hunters.

“We have rescued tigers that have been trapped, shot, stabbed, and poisoned, as well animals who have attacked villagers, eaten livestock, taken up residence in fields and gardens, or otherwise exhibited abnormal behavior,” said Yanti. “The hunting of tigers often increases during the holy month of Ramadan and the Idul Fitri holiday, since the hunters know the forest patrols are reduced during this time.” 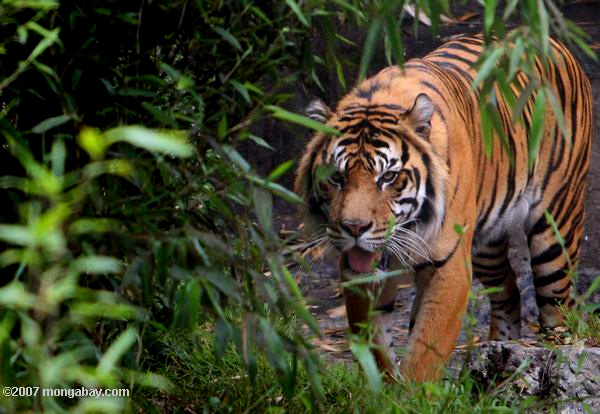 Classified as Critically Endangered by IUCN, there are less than 400 Sumatran tigers left in the wild. They can live up to 15 yeas, and are solitary animals, with population densities around 4-5 adults per 100 square km (39 square miles). According to TRAFFIC, approximately 78% of the tiger deaths are from poachers who sell their parts on the black market—this, despite Indonesia’s passage of laws and stiff penalties designed to protect the animals.

According to Yanti, four issues must be addressed to ensure effective tiger conservation: 1) the shrinking of tiger habitat by human activities, 2) the inefficacy and lack of enforcement of laws preventing the illegal hunting and trade of tigers and their body parts 3) a lack of inter-agency collaboration between multiple stakeholders, and 4) the loss of species that tigers normally prey upon.

One possible solution which can help solve several of these, would be to establish a sanctuary well away from human populations where tigers would be free to roam in the wild.

“Although there are already tiger conservation programs, which protect the animals by placing them in zoos, this is not a permanent solution,” Yanti believes. “A tiger’s natural habitat is in nature, not in a cage. If a tiger is kept in a cage, its behavior can be changed, permanently.”

For Yanti, the ideal solution would be to create a Tiger sanctuary for those animals who can not be returned to the wild. Located within the tiger’s natural habitat, the sanctuary should be far from settlements, and still contain an abundance of the tiger’s natural prey. Since animals with disabilities or amputations are still important sources of genetic stock, this sanctuary would be vital for population recovery. 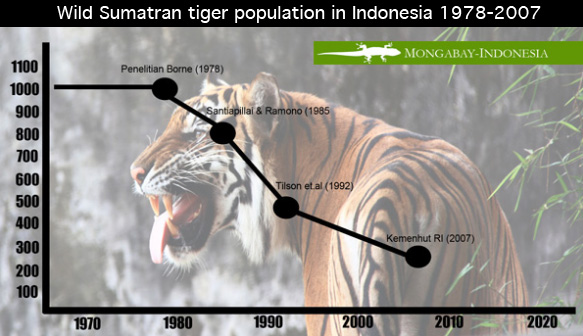 Yanti told Mongabay that she has already found several donors who would be willing to contribute to this project. However, the biggest issue is sorting out the bureaucracy to determine which agencies need to approve the project, and to follow the proper legal route necessary for ensuring the sanctuary’s lasting success.

“The key,” said Yanti, “will be inter-agency cooperation, and the commitment and hard work of all stakeholders.”