Whether a die-hard Harry Potter fan or not, you probably know what dementors are. They were the guards of Azkaban—dark hooded evil beings that sucked the soul out of their victims, leaving them alive but “empty-shelled.”

These fictional creatures now share their name with a new species of cockroach wasp, insects that turn cockroaches into zombies. By popular vote, a previously unnamed cockroach wasp species from Thailand was christened Ampulex dementor at the Natural History Museum in Berlin in 2012.

Visitors at the museum had four names to choose from —Ampulex bicolor indicative of the wasp’s distinctive black and red color, Ampulex mon referring to the Mon people of Thailand (for its geographic origin), Ampulex plagiator for its attempts to mimic the appearance and movement of ants, and Ampulex dementor for its peculiar way of hunting cockroaches that make them lose their “free-will.” At the end of the ballot, dementors emerged victorious.

“I would likely have voted for it myself,” said Michael Sharkey, an entomologist at the University of Kentucky, whose team collected the museum specimens of these wasps from the Khao Kho National Park in Thailand. “What I find interesting about the name is that what is considered a fantasy among humans, the dementors of Harry Potter, is a reality in the world of insects.” 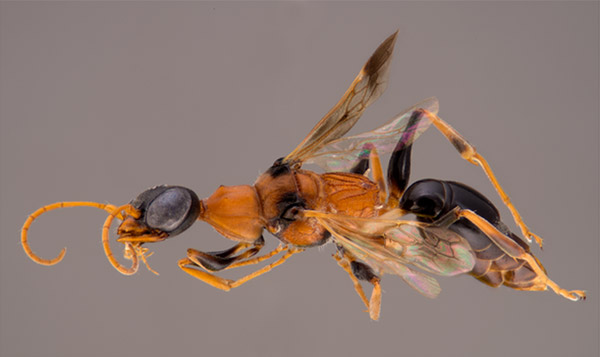 The newly named species was recently described in a paper published in PLoS ONE by Michael Ohl and colleagues from the Natural History Museum in Berlin.

“Our public voting of a taxonomic name was received very positively. Visitors were highly interested and during the event spent a significant amount of time asking for details and listening to explanations,” the authors wrote in the paper.

It is not difficult to see why the wasp was a hit. This brightly metallic colored group of insect is famous for its rather unorthodox ways of reproduction. The wasp stings a cockroach’s head, transferring neurotoxins. The cockroach then slowly turns into a submissive being, lacking all free-will, and follows the wasp to its burrow. Inside the burrow, the wasp lays an egg on it. In a few days the wasp larva hatches, feeds on the cockroach, pupates, and soon emerges as an adult.

Given this latter behavior, Sharkey thinks another name would have worked too.

“For example, the wasp could also have been named after the creature in the movie Alien because of the way it consumes the living body of its host (cockroach) from the inside, much as the Alien did to humans in the space ship,” he said.

For Ohl and coauthors, the public voting was an exercise to help people connect emotionally with both biodiversity and the wonder of discovering new species. There have been similar attempts in the past. In 2010, The Guardian ran a contest asking people to suggest common names for unnamed species, and the Natural History Museum of London asked the public to help out with the naming of a sea-dwelling worm.

For a scientific name to resound with the public, nothing perhaps catches their fancy more than names from Sci-Fi movies, TV shows and the names of celebrities. Like, the bee Euglossa bazinga, and a jellyfish Bazinga rieki, inspired by Sheldon Cooper’s famous catchphrase “Bazinga” in the Big Bang Theory.

The beautiful Ampulex dementor, too, will be hard to forget, just like the Dementor’s kiss from Harry Potter.

(05/02/2014) Malaysia is set to lose ancient limestone formations to quarrying despite the discovery of new species of geckos in the area. The species are described in three studies recently published in the journal Zootaxa. One of the discoveries, Cyrtodactylus metropolis, is the first endemic vertebrate species discovered in the Batu Caves area.