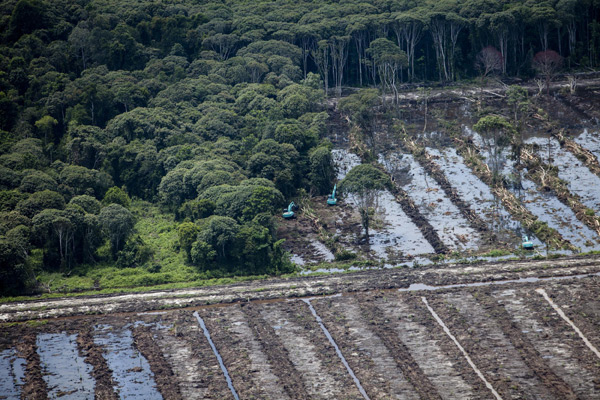 Deutsche Bank has sold its stake in Bumitama, an Indonesian palm company that has been embroiled in controversy over alleged destruction of rainforests and peatlands in Borneo, reports Friends of the Earth Europe.

The German banking giant revealed the divestment last week during its annual meeting after Rettet den Regenwald, a German NGO, presented a petition with nearly 88,000 signatures calling on it to dump Bumitama.

Both Friends of the Earth Europe and Rettet den Regenwald welcomed the move.

“It is high time that a financial institution like Deutsche Bank listens to the voices of both its customers and German citizens,” said Mathias Rittgerott of Rettet den Regenwald in a statement. “We do not support palm oil production, and we do not want Deutsche Bank to give any support to destructive palm oil companies.”

“Deutsche Bank’s divestment from Bumitama is a good start towards cleaning up the mess of Bumitama and this step must be followed by other banks and investors who wish to invest responsibly,” added Anton P. Widjaya, director of Walhi-Friends of the Earth West Kalimantan (Indonesia).

Friends of the Earth Europe is currently in the midst of a campaign to pressure banks that finance palm oil companies, including Rabobank, BNP Paribas, and Dutch pension funds ABP and PfZW.

Friends of the Earth Europe is also targeting Wilmar, the world’s largest palm oil company, which recently committed to a zero deforestation, zero conflict policy. The activist group accuses Wilmar of failing to live up to its pledge, citing ongoing disputes in Indonesia, Uganda, Liberia, and Nigeria. It notes that Wilmar buys more than half of Bumitama Agri’s palm oil.

Bumitama Agri’s alleged environmental transgressions were exposed in reports published by Greenpeace, the Environmental Investigative Agency, and Friends of the Earth, Forest Heroes and SumOfUs in November 2013.