by Morgan Erickson-Davis on 4 April 2014

Climate change is contributing to a slew of global problems, from rising seas to desertification. Now, in a paper published in Global Change Biology, researchers have added another repercussion: shrinking salamanders.

With their permeable skin and their dependence on both aquatic and terrestrial habitats, amphibians such as salamanders are particularly vulnerable to environmental changes. In fact, scientists have long regarded them as “sentinel” species that indicate ecological problems before other groups of animals are affected. Many amphibian populations around the world are currently experiencing precipitous declines, estimated to be at least 211 times normal extinction rates. Scientists believe these declines are due to a multitude of factors such as habitat loss, agricultural contamination, and the accidental introduction of a killer fungus (Batrachochytrium dendrobatidisi), among others.

Declines in salamander populations in the Appalachian Mountains prompted Karen Lips, an amphibian expert and professor at the University of Maryland, to wonder whether or not a fungal infection was to blame. To determine this, Lips and her colleagues measured and tested wild salamanders from 78 sites in five states, as well as museum specimens collected over five decades. They found very little fungus, but did notice significant size differences between the museum specimens and salamanders currently inhabiting the test sites. 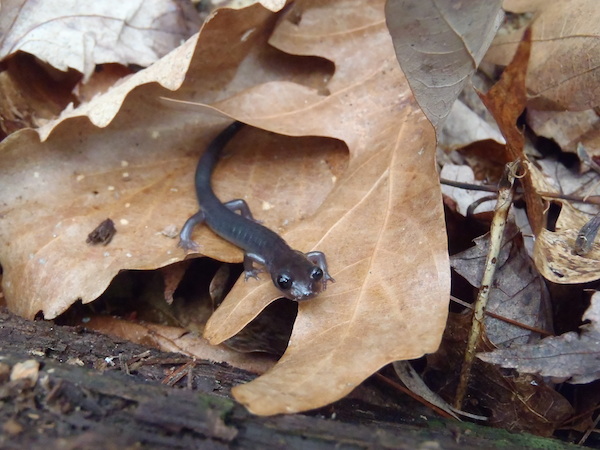 This Northern gray-cheeked salamander, P. montanus, is one of the native Appalachian mountain range salamander species that has gotten significantly smaller, according to field research and studies of museum samples by Associate Prof. Karen Lips and colleagues. Photo by: Nicholas M. Caruso.

On average, salamander size decreased eight percent since 1980, with the biggest size differences occurring at sites that have experienced the most warming and drying.

“This is one of the largest and fastest rates of change ever recorded in any animal,” Lips said. “We don’t know exactly how or why it’s happening, but our data show it is clearly correlated with climate change.”

To find out why salamanders are shrinking, the researchers used computer modeling to estimate activity and behavior based on weather conditions recorded near the test sites. The simulations showed that while today’s salamanders are just as active as their predecessors, increased temperatures require them to burn seven to eight percent more energy in order to maintain their metabolic rates. Reduced size might be a way for salamanders to conserve energy in a more energy-intensive world.

However, being small is not without its tradeoffs.

“Smaller is usually not good for these animals,” Lips told mongabay.com. “Bigger is better – it means more offspring, more fitness, and fewer thing can eat you. Bigger also means you can beat out others in territorial fights or defenses, and bigger males get bigger females and so leave more offspring.”

In many organisms, size is determined not just by genetics, but also by environmental conditions. The researchers’ next step is to figure out how the salamanders are adjusting their size, and what it may mean for their long-term survival.

“We don’t know if this is a genetic change or a sign that the animals are flexible enough to adjust to new conditions,” Lips said. “If these animals are adjusting, it gives us hope that some species are going to be able to keep up with climate change.” 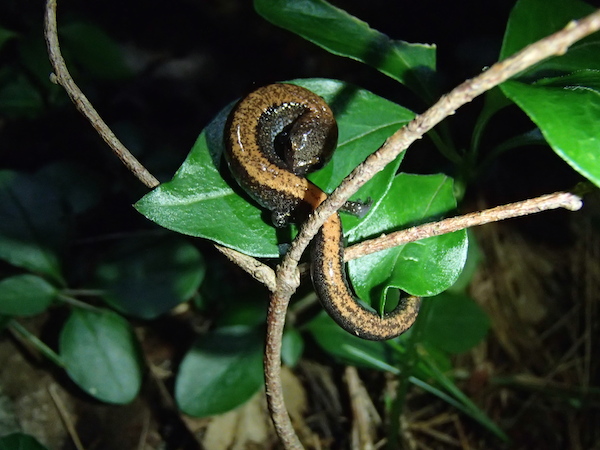 This red-backed salamander was part of field research by Associate Prof. Karen Lips and colleagues showing that seven of eight salamander species studied in the Appalachian Mountains of MD and VA have gotten smaller over the past 50 years due to climate change. Photo by: Nicholas M. Caruso. 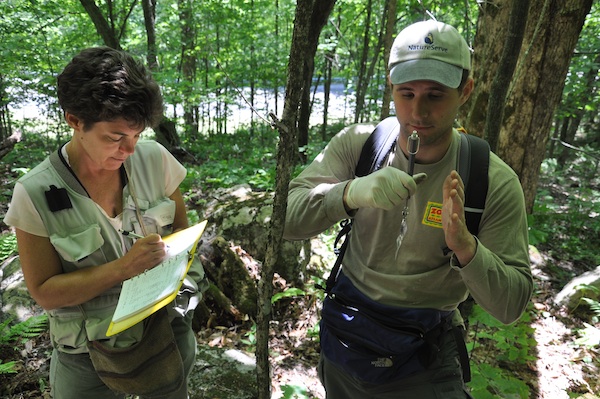 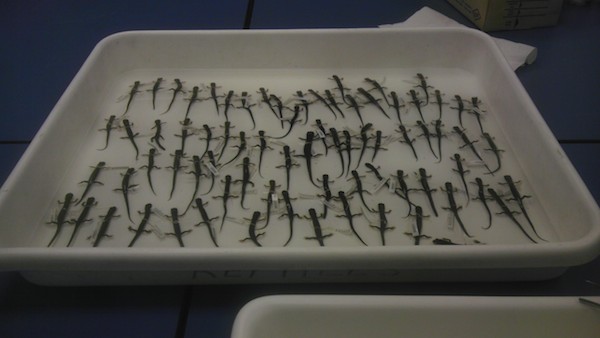 This tray of Northern gray-cheeked salamanders, collected decades ago by Prof. Richard Highton, are stored in a Smithsonian Institution facility in Suitland, MD. Karen Lips and colleagues used them to show that Appalachian salamander species are getting smaller in response to climate change. Photo by: Nicholas M. Caruso.

(03/14/2014) The African stink ant creates large underground colonies that are home to anywhere from hundreds to thousands of ants, and occasionally a frog or two. The West African rubber frog hides in the humid nests to survive the long dry season of southern and central Africa. However, the ant colonies are armed with highly aggressive ant militias that fight off intruders with powerful, venomous jaws. So how do these frogs escape attack?