The notion of spiders using ants as bodyguards seems a bit contradictory, but that is exactly what occurs on the tropical forest floors of the Philippines. The jumping spider (Phintella piatensis) strategically nests within the vicinity of the aggressive Asian weaver ant (Ocecophylla smaragdina) as a defense tactic against its main predator, the spitting spider (Scytodes species). The behavior of a vulnerable species seeking protection of a different, more aggressive species is commonly seen among birds, but not among arachnids. In a recent study published in Behavioral Ecology and Social Biology, researchers Ximena Nelson of the University of Canterbury in New Zealand and Robert Jackson of Canterbury and the International Centre of Insect Physiology and Ecology in Kenya examined this dynamic relationship between the protective weaver ant, the timid jumping spider, and the predatory spitting spider. 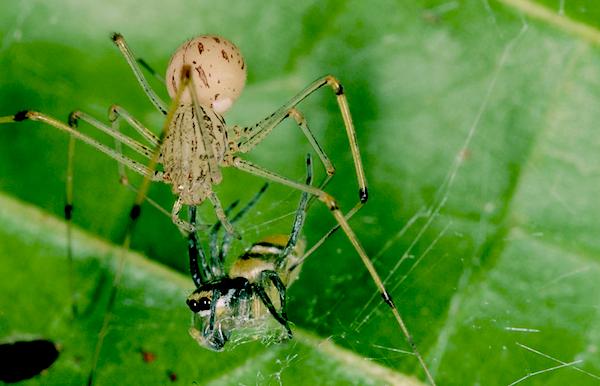 A spitting spider (Philippine Scytodes) about to feast on a jumping spider. Photo by Ximena Nelson. 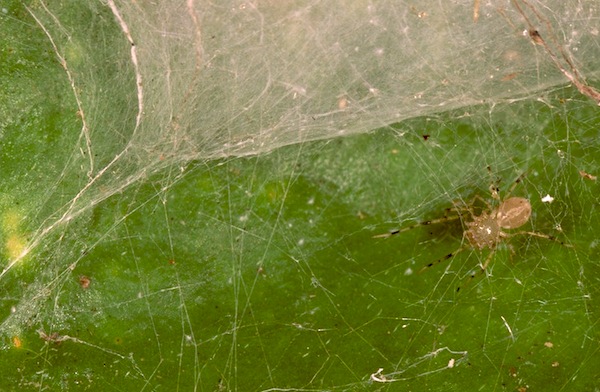 A spitting spider in its web hovers above a thin jumping spider nest. Photo by Ximena Nelson.

At the International Rice Research Institute (IRRI) in Los Baños in the Philippines, Nelson and her team conducted a series of experiments examining how the sensory characteristics of jumping and spitting spiders influenced their behavior. They hypothesized that the jumping spider uses predominately its eyesight when choosing nesting locations close to weaver ants whereas the spitting spider uses its olfactory senses to avoid weaver ants. The researchers placed jumping spiders and spitting spiders in different chambers and observed whether the visual presence or odor of weaver ants triggered nest-building or web-spinning.

Spitting spiders use their sense of smell rather than sight when choosing strategic nesting locations and when hunting jumping spiders. In the field, the researchers observed 174 instances where spitting spiders spun webs directly above jumping spider nests. In all of these cases, weaver ants were never present on the inhabited leaves nor within the vicinity.

The presence of weaver ants elicits two very different responses from the predator-prey duo of the spitting spider and jumping spider. By using their eyesight and olfactory senses, jumping spiders seek protection under weaver ants by building nests in their presence, and their ant-proof nests allow them to live in relative safety among weaver ants. In contrast, the lethal spitting spider uses its olfactory senses to help it locate prey as well as avoid its foes.

“There are other salticids (members of the jumping spider family) that form mixed-species associations with other species of salticids (especially in Africa), and we think this might be a response either to ant predation, or to the presence of ants,” Nelson told mongabay.com. “Other salticids sometimes aggregate in the vicinity of weaver ants nests, but here they seem to form crèches to protect their young, as adults are better able to defend themselves than the young.”

This study could contribute to a more thorough understanding of arthropod relationships that occur in the microhabitats of tropical rainforests. The researchers believe other associations similar to the dynamic between weaver ants and arachnids could potentially be found among other arthropods.

(05/23/2013) Scientists have uncovered two miniature spiders living on mountains in China’s southern region, one of which is among the smallest spiders recorded worldwide, according to a new paper in ZooKeys. Both spiders belong to the Mysmenidae family, which is made up of mini-spiders with eight eyes.