Legal forest reserve and cattle pasture in the Brazilian Amazon. By Rhett Butler.

The revised Forest Code passed into law by Brazil in 2012 could authorize conversion of 400,000 square miles of native grassland for industrial agriculture, while granting amnesty for deforesters in the Amazon rainforest, argues a policy piece published this week in the journal Science.

Brazil passed the revision in 2012 after years of acrimonious debate between environmentalists, indigenous groups, and the agribusiness lobby. The final law maintains baseline targets for forest cover in the Amazon, but relaxed some regulations on forest clearing in certain areas. It also waived reforestation requirements for small property owners who failed to comply with the previous code.

While environmentalists generally reacted negatively to the new Code, proponents argued that any lost ground would be made up through stronger law enforcement. The previous Code was largely ignored by landowners in remote parts of the Amazon, leading to more than 50 million hectares of illegally cleared forest.

The new paper estimates that while the new Forest Code indeed establishes greater transparency around land ownership in Brazil through a land registry, it effectively reduced the restoration commitment by 58 percent relative to the old Forest Code. That means some 29 million hectares of forest that would have been restored can now be permanently given over to farming and cattle ranching.

Worse, from the authors’ point of view, the new Forest Code allows large-scale conversion of other native ecosystems.

“Brazil has done a great job reducing deforestation in the Amazon, but the other biomes have been short-changed in the process,” said co-author Marcia Macedo of the Universidade Federal de Minas Gerais and the Woods Hole Research Center, noting that the new law allows legal deforestation of an additional 400,000 square kilometers of the Cerrado, a woodland savanna that has already been reduced in extent by 50 percent in recent years. “That’s an area almost the size of California. Allowing that to happen would be an environmental disaster.” 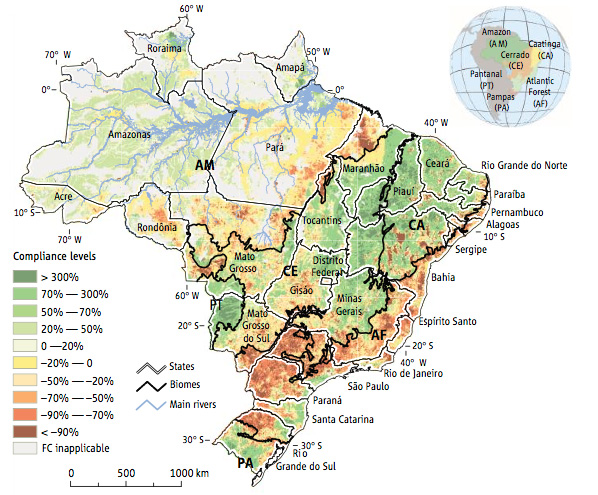 The new law also allows landowners to trade “surplus forests” — areas protected beyond what is required by law — as offsets. While supporters say this system puts a value on native forests, the paper notes that it will also undercut restoration requirements.

The authors say that though the agribusiness lobby seems to have won the short-term battle to weaken the Forest Code, long-term it is in the industry’s best interests to maintain a healthy and functioning ecosystem.

“The agribusiness lobby should see this as a big win, but if they continue to boycott and sabotage the Forest Code, they will be shooting themselves in the foot” said lead author Britaldo Soares-Filho of the Federal University of Minas Gerais. “Agricultural productivity depends on the conservation of native ecosystems and climate stability.”

Accordingly, the authors are hopeful that aligning economic incentives with native ecosystem conservation can result in better outcomes for both agribusiness and the environment.

“Increasingly, farmers and ranchers are adhering to voluntary registries that require commitments to improving social and environmental performance. Both certification schemes and voluntary registries may eventually enable access to special
markets that provide financial incentives to participating producers,” they write.

“Economic incentives for conserving forests, including the Warsaw Framework for Reducing Emissions from Deforestation and Forest Degradation as (REDD+), will be essential to help implement the Forest Code and to enable Brazil to better reconcile environmental conservation with agricultural development.”