Without wings, smaller terrestrial animals are really restricted when it comes to moving long distances to find new areas of habitat. However, lots of species get around this problem simply by clinging on to other, more mobile animals. The common, yet overlooked pseudoscorpions are among the most accomplished stowaways, one of which (Cordylochernes scorpiodes) has forged a fascinating relationship with the harlequin beetle, a large, strikingly colored insect.

This story begins on a dead fig tree in the neotropical rainforest. Inside these trees, the larvae of the harlequin beetle feed on the decaying wood. Scuttling around on the tree are pseudoscorpions feeding on other small arthropods which they dispatch with their venom-dispensing pincers. These arachnids are most at home in newly decaying trees and after a while their habitat usually becomes less suitable, but how are they to find a new place to live? 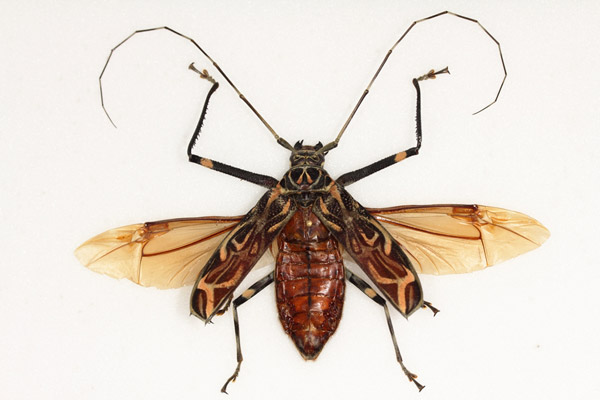 A female harlequin beetle (Acrocinus longimanus) found in Trinidad. These large, powerful fliers are used as transport by the pseudoscorpion, Cordylochernes scorpioides. More than 30 pseudoscorpions may clamber aboard one beetle. Photo by: © Ross Piper.

Fortunately, the solution to their problem is beneath their feet. The harlequin beetle larvae have completed their development and are ready to emerge as adults from the tree. As soon as an adult beetle has fully emerged from its larval tunnel, the pseudoscorpions gather around its rear end and nip its abdomen with their pincers. Annoyed by these pinches, the beetle flexes it abdomen, making enough space beneath its elytra and wings for the little arachnids to jump aboard. This is where it gets really interesting as not all the pseudoscorpions freely embark. One of the larger male pseudoscorpions will prevent other males from boarding the beetle, but will happily allow females on, in the hope of mating with them before they reach their destination. Think of it like a romantic cruise.

In total, there may be more than 30 pseudoscorpion passengers on one beetle. The beetle takes off from the tree that nurtured it, along with its arachnid stowaways. Eventually, the beetle will land on a suitable, newly decayed tree and the female passengers will disembark. But the large, male pseudoscorpion may remain aboard its beetle for as long as two weeks in the event of more females clambering aboard when it touches down elsewhere. These long-term passengers don’t want to fall off prematurely so they spin silken ‘safety harnesses’ that eventually become little nest-like structures. They even use a silken thread to descend from their beetle and may even use this line as a means of re-boarding the transport if they need to.

One final, fascinating facet to this story: the larger, bullying males who monopolized the beetle transport (and the females) do not get everything their own way. They will not father all of the resulting offspring because the females store sperm from previous matings. 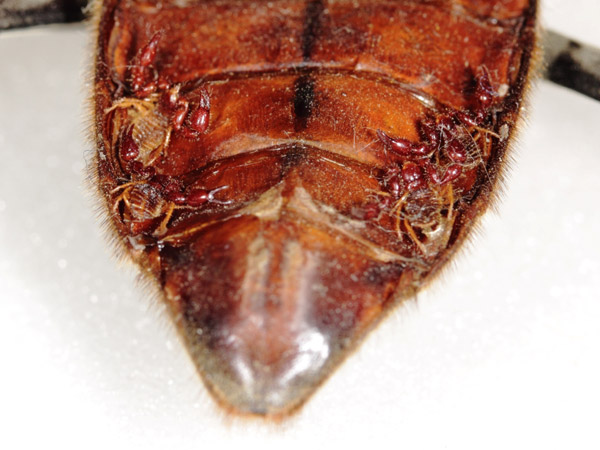 On the abdomen of this female harlequin beetle, hiding beneath the elytra and the wings, were five pseudoscorpions, four of which can be seen here. Photo by: © Ross Piper. 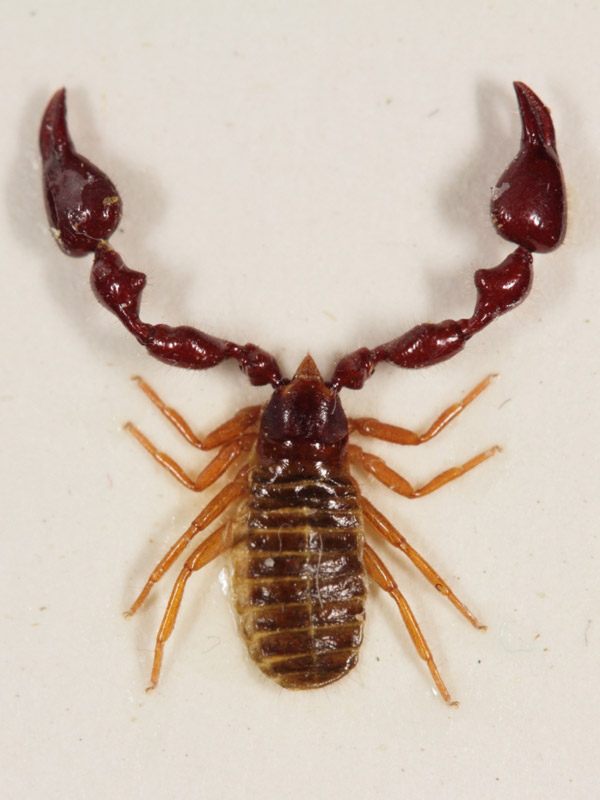 The beetle riding pseudoscorpion (Cordylochernes scorpioides) uses the harlequin beetle to disperse to new areas of habitat. Large males even monopolize this transport as a way of mating with lots of female. Photo by: © Ross Piper.

How “insect soup” might change the face of conservation

(01/23/2014) Much of what we know about patterns of biodiversity has come from extensive fieldwork, with expert researchers sampling and identifying species in a process that takes thousands of man-hours. But new technologies may revolutionize this process, allowing us to monitor changes in biodiversity at speeds and scales unimaginable just a decade ago.

(01/21/2014) The discovery of a new, bi-colored beetle species in the lowland rainforest of French Guiana just added a little pizzazz to the ranks of the Pseudomorphini tribe of beetles. With wing cases (elytra) that sport black spots against a rusty red background, the newcomer was dubbed Guyanemorpha spectabilis, or the spectacular Guyane false-form beetle, by entomologist Terry Erwin in the journal ZooKeys.

(01/10/2014) Rove beetles are among the most diverse animals on the planet, with around 56,000 species currently described. Amongst this multitude of species is a dazzling array of adaptations perhaps best illustrated by the genus Stenus. These beetles, with their bulbous eyes and slender bodies are often found near water running swiftly over the wet ground and clambering among the vegetation.