The Javan rhino population has increased by over ten percent from 2012 to last year, according to new figures released by Ujung Kulon National Park. Using camera traps, rangers have counted a total of 58 Javan rhinos, up from 51 in 2012. Although the species once roamed much of Southeast Asia, today it is only found in Ujung Kulon National Park in western Javan and is known as one of the most imperiled mammals on the planet.

Conservationists counted 50 young and adult rhinos last year, along with eight calves, proof that despite such a small population the rhinos are reproducing. Of the 58 rhinos, 23 are female and 35 are male. In the past two years, two rhinos have been found dead. 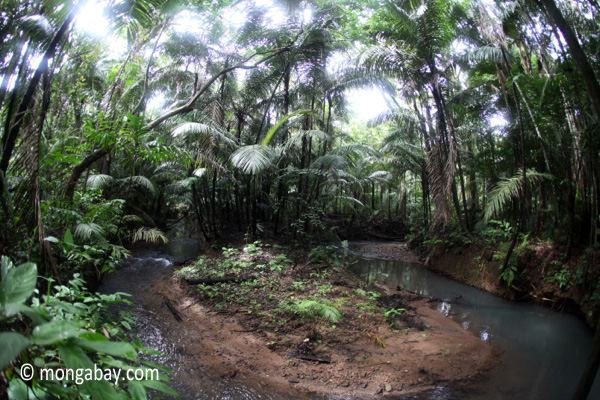 Not surprisingly, Javan rhinos (Rhinoceros sondaicus) are listed as Critically Endangered by the IUCN Red List. Given the tiny population in a single area, potential threats include inbreeding, poaching, and disease. In addition, the rhinos sit in a volcanic hotspot, and a sizeable eruption could wipe out the whole population. Conservationists also believe the population won’t be able to grow much larger given the size and state of the forest. There have been discussions about eventually moving a part of the population to a different site to help boost the population (and as an insurance policy), but no plan has been approved yet.

The Javan rhino is most closely related to the Indian rhino, or the greater one-horned rhino (Rhinoceros unicornis); both species sport only one horn and have an armor-like hide, but the Javan is the smaller of the two. The pair are the only members of the genus, Rhinoceros.

The last Javan rhino on mainland Southeast Asia—which represented a different subspecies—was killed by poachers in 2009 in Vietnam. 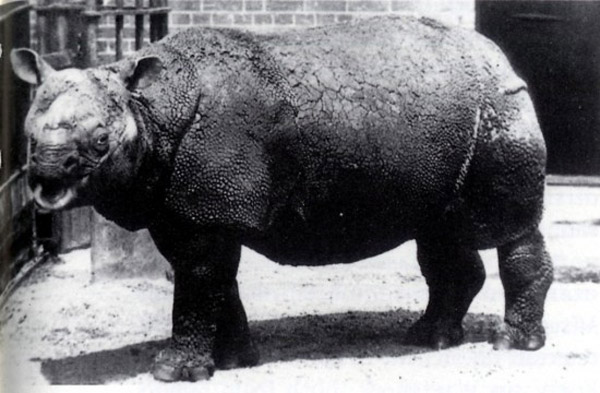 Javan rhino in the London Zoo during the 19th Century. No Javan rhinos are in captivity today. Photo by: T.Dixon/the Zoological Society of London.

(06/04/2012) Trekking through deep mud and sawgrass we find a stinking wallow. The elite rangers, dressed completely in black despite the tropical heat, mark the site with the GPS unit, measure the mucky puddle’s depth, and move on. This is the first sign of one of the planet’s rarest animals—the Javan rhino. Only 35 or so remain, including none in captivity. This patch of rainforest and swamp in Ujung Kulon National Park—on the very tip of West Java—is their last and only refuge.

(05/01/2012) Nearly all the world’s remaining Javan rhino have been documented on video via camera traps in Indonesia’s Ujung Kulon National Park, according to a montage put together by park authorities.

(01/04/2012) Camera traps have successfully taken photos of 35 Javan rhinos (Rhinoceros sondaicus) in Ujung Kulon National Park. The small population, with an estimated 45 or so individuals, is the species’ last stand against extinction. Late last year, a subspecies of the Javan rhino, the Vietnamese rhino (Rhinoceros sondaicus annamiticus), was declared extinct.