Next big idea in conservation? Recognizing we are our own obstacles 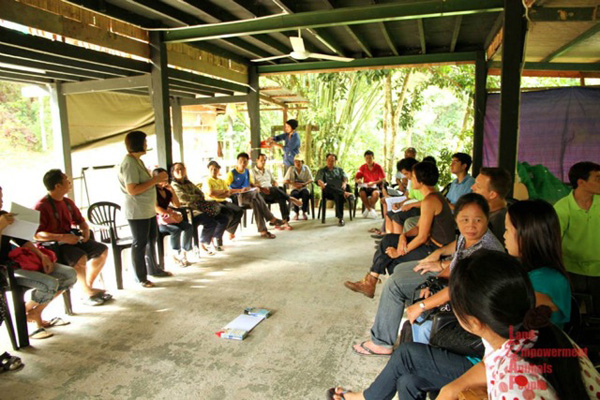 Cynthia Ong is not satisfied with the conservation status-quo. Her work aims to bring people together to form new conservation paradigms around the idea that land, animals and people are indelibly and inextricably linked.

“The development-conservation polarity is an old frame which I feel no longer serves us,” Ong told mongabay.com. “I think it pits us against each other…I put my attention and energies into connecting dots, issues, people, groups, sectors across boundaries of habit, convention, tribe, culture, institution, ideology, agenda – creating spaces for engagement, new conversations, innovation and collaborative solution-building.”

Cynthia Ong is a facilitator, organizer, and manager with over 20 years experience in socio-environmental justice, entrepreneurship, and community activism. She has served as founder, board director and CEO of numerous for-profit and not-for-profit organizations in both Southeast Asia and in the U.S.

Currently, Ong is the executive director and CEO of Land Empowerment Animals People (LEAP), which she founded in 2005. “Our specific purpose is in facilitating partnerships and projects across sectors and hemispheres, [communities, NGOs, government, industry, etc.] based on a core belief that real, robust, and resilient solutions are found in connection and relationship with each other.” Much of her work focuses locally, on her home state of Sabah, Malaysian Borneo. 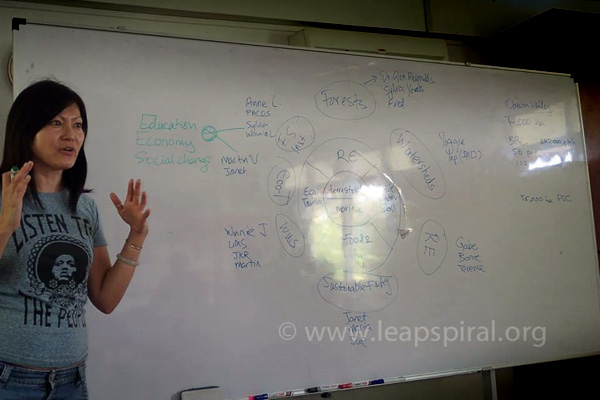 An Interview with Cynthia Ong

Cynthia Ong: I was born and grew up in Sabah, Malaysian Borneo and as a city girl in those days, my childhood was spent quite “wildly” – in trees, on the edge of forests, in drains and oceans, surrounded by four-legged, winged and finned ones. After high school, I studied Hotel and Catering Management in Switzerland and further trained and worked in the Netherlands. I think this program prepared me well for the work I do! It taught me how to run multiple departments (think projects), work on the ground (scrubbing floors if necessary), manage, coordinate and supervise at all levels, juggle events and projects with teams of staff, and coherently (often magically) bring everything together. This was the foundation upon which I built an entrepreneurial career in the hospitality, special events and projects industry; at the heart of it was my passion for creating innovative spaces, leading and facilitating processes and groups, raising awareness and support for socio-environmental issues, conceptualizing and organizing events and projects with purpose. I later became very interested in group facilitation and mediation and trained over the space of a few years in Taiwan and the U.S., finally leading to a shift from the commercial world to the non-profit world, with an initial focus on criminal justice in the U.S. This experience politicized me for life and fired my passion for justice and equality. In response to a request from Sabah and Borneo for help in conservation (while I was still based in the U.S.), I began exploring the possibility of facilitating partnerships between the east and west on the common ground of ecologically sustainable co-existence. I put all the tools, skills and experiences I’d accumulated over the years in a toolbox and set off to build bridges! The rest, as they say, is history.

Mongabay.com: How long have you worked in tropical forest conservation and in what  geographies? What is the focus of your work?

Cynthia Ong: I would say that I’ve worked indirectly for about 22 years. I started and completed a statewide socio-environmental awareness-building project throughout the pregnancy of my daughter Sara (who is now 21!), and more directly since the founding of LEAP in 2005. The local focus of my work has been in my home state of Sabah, Malaysian Borneo, with a national, regional and global vision and alignment. Our specific purpose is in facilitating partnerships and projects across sectors and hemispheres, based on a core belief that real, robust and resilient solutions are found in connection and relationship with each other. 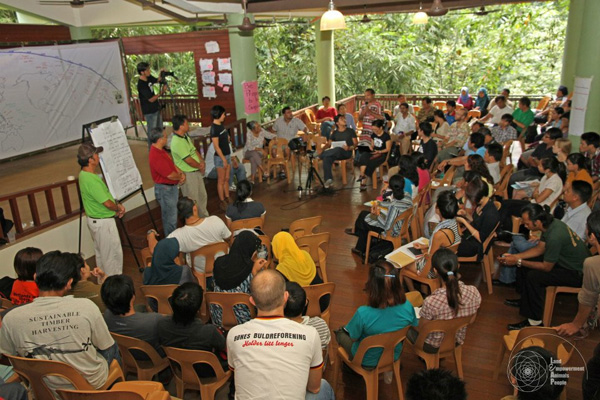 Mongabay.com: What do you see as the next big idea or emerging innovation in tropical forest conservation? And why?

Cynthia Ong: Although I still use the word/term conservation in my language, I am deeply frustrated by its limitations! The development-conservation polarity is an old frame, which I feel no longer serves us. I think it pits us against each other, constrains us in us-them dynamics, makes one right or better and the other wrong or bad, and the divide is a chasm, is a disconnect which keeps our solutions partial, oftentimes conflicted and always limited. I don’t think this mindset and modus operandi is going to cut it in the world of increasing carbon emissions, rising sea levels, and climate change where we co-exist today. I put my attention and energies into connecting dots, issues, people, groups, sectors across boundaries of habit, convention, tribe, culture, institution, ideology, agenda – creating spaces for engagement, new conversations, innovation and collaborative solution-building.

Mongabay.com: What are the obstacles/challenges to spreading this idea?

Cynthia Ong: I think that we’re invested in our constructs, the patterns and formats by which we engage, and their underlying unexamined assumptions. We roll out the same processes and get the same results. We stay in our corners, interact with people like ourselves, compete amongst each other for the same finite resources, build campaigns that say if only the other corner would change their ways everything would be fine and the world would be better. I think these habits sustain the status quo. Someone from one of the world’s largest multi-nationals once said to me “You people in conservation are not even at the table, you are fighting for crumbs under the corporate table, and the work you do will always be limited to the bits of crumbs you get.” He makes a legit point. And with the territoriality, martyrdom and holier-than-thou attitudes in our approach and campaigns, I fear we are making ourselves irrelevant to everyone, except ourselves.

What are the obstacles? We are our own obstacles. The challenge is to get ourselves out of the way, stop thinking it’s all about us, scrutinize, question our assumptions and constructs, and work hard and smart to redesign and recalibrate. Radically different results – which are what we need – are going to take radically different approaches and processes. If we continue on the tracks of business-as-usual, government-as-usual, conservation-as-usual, with indigenous communities silently screaming in the margins, and science writing thousand-page papers in their bubble, I’m afraid we are not going to make much impact on our own trajectory.

Cynthia Ong: I focus on disrupting those trajectories, finding an ever so slightly open door here, a window there, seeking out champions across all sectors, breaking open (blasting if necessary) closed spaces, encouraging and facilitating the diversity of voices, expecting and working through conflict, demanding ever greater transparency, and building trust. Diversity builds a more robust space, and conflict can expand and deepen the container to hold new conversations that can lead to more resilient solutions. I always facilitate to find the creative genius in a group – the more diverse the group, the better. Yes, there will be chaos – crazy, scary, uncomfortable chaos – and then creative genius rises through! My experience also is that self-organizing almost always swirls out of chaos, leadership emerges organically as people act on passion and responsibility, and the diversity ensures that most bases are covered.

Old school conservation, starting in the late 1800s with the founding of Yosemite National Park, separated humans from wilderness. I believe that was a defining moment for the movement that was to come, and I advocate fervently that we find our way back into the web of life, remember and reclaim our right and respectful place in wilderness. And to me that is in deep, irrevocable relationship and intimacy with diversity. 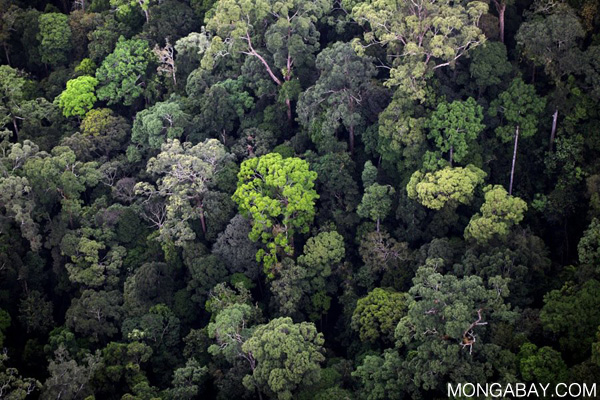 Rainforest in Sabah. Photo by Rhett A. Butler.

Mongabay.com: Are you personally involved in any projects that represent  emerging innovation in tropical forest conservation?

Cynthia Ong: We [LEAP] played a key role in initiating and facilitating a new conversation over the past three years, which has led to Forever Sabah, a 25-year transition for the state towards an equitable, diversified green economy. This “core out” design and process, which we call the Forever Sabah ecology, begins with our forest and terrestrial and marine ecosystems at its core, grows into four focal areas of renewable energy, food and agriculture, water, waste and soil and eco-tourism. It then expands into the “first wave” of seven distinct and inter-connected project areas – forest connectivity, watersheds and communities, renewable energy solutions, sustainable food and agriculture, urban waste, community-based eco tourism and the Forever Sabah Institute. We envision the 25 years unfolding in 5-year “waves” of ground-up, project-based initiatives, bringing together previously fragmented groups in joint action, and allowing the work on the ground to impact institutional and policy change. Forever Sabah also builds regional and international partnerships, which expand the ecology – a local focus with regional and global alignment and feedback loops – and initiate a flow and exchange of information, knowledge, learning, innovation, solution-building. The Forever Sabah conversation started with the question “where will Sabah be in 50 years if we continued on the trajectory we are on?” We endured through a necessarily and oftentimes exasperatingly clunky and chaotic process to arrive at answers, which shaped the Forever Sabah imperative. When I am faced with the inevitable “wow, that is huge and ambitious” reaction, I say that anything else will not be enough and that I commit to a Forever Sabah AND am prepared to fail fabulously! We are a strategic state in one of the most bio-culturally rich places in the world, we are at a cusp, we are small enough to make it possible and large enough to cause a significant ripple through a critical region in the tropical rainforest world. 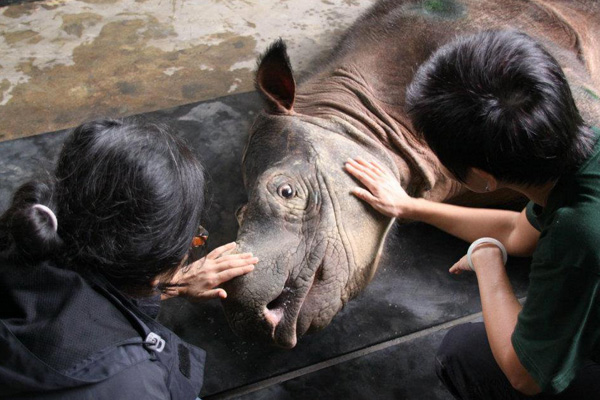