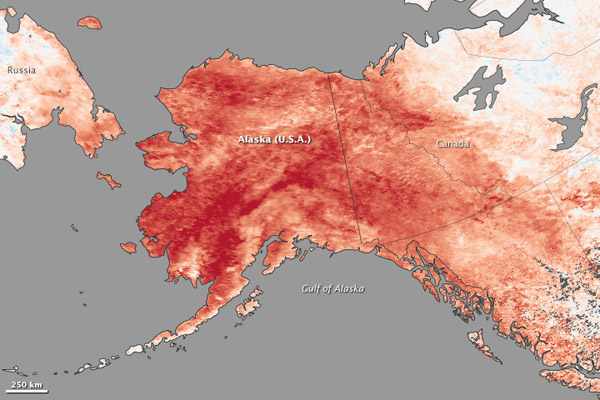 Alaska got California weather at the end of January, as displayed by a new map based on data by NASA’s Terra satellite’s Moderate Resolution Imaging Spectroradiometer (MODIS). The U.S. state experiences one of its warmest winter periods on record during the second half of January, including some temperatures that ran 40 degrees Fahrenheit (22 degrees Celsius) above average. According to the EPA, temperatures in Alaska have risen an average of 3.4 degrees Fahrenheit (1.9 degrees Celsius) in just the last 50 years due to climate change.

Alaska’s warm spell was caused by high pressure conditions in the Pacific Ocean, which pushed the warm air and precipitation that usually ends up in California this time of year into the 49th state. The abnormal temperatures brought plenty of rain to Alaska, instead of the normal snow.

“The combination of heat and rain has caused Alaska’s rivers to swell and brighten with sediment, creating satellite views reminiscent of spring and summer runoff,” writes NASA. Avalanches blocked Richardson Highway while some ski places shut down due to lack of snow.

Alaska has warmed twice as fast as the rest of the U.S. under climate change, and temperatures in winter are rising even more rapidly. According to the EPA, winter temperatures have gone up by 6.3 degrees Fahrenheit (3.5 degrees Celsius) over the last half century.

In fact, during January many parts of the continental U.S. were actually colder than Alaska as the lower-48 were hit with the so-called “polar vortex.” The frigid cold was due to a weak jet steam, a phenomenon that some climate scientists believe may be linked to the decline in Arctic ice. The jet stream usually moves weather east to west, but a weaker jet stream means that weather is moving more north and south, i.e. bringing Arctic temperatures to the continental U.S. A number of climate scientists are currently investigating the possible link between abnormal jet streams and the rapid loss of Arctic sea ice, which if true would mean climate change may not only be exacerbating heatwaves but cold spells as well.