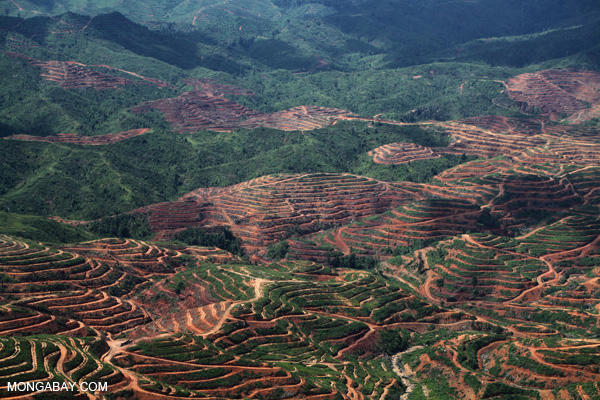 Conversion of rainforest to oil palm plantations in Malaysia. Photo by Rhett A. Butler

Human population growth and associated food demand will likely take a heavy toll on tropical ecosystems unless major shifts occur in how crops are produced and consumed, warns a new review published in Trends in Ecology & Evolution.

Noting that projections published by the U.N. now forecast the human population to swell to 11 billion before the end of the century, William F. Laurance, Jeffrey Sayer, and Kenneth Cassman highlight potential impacts of agricultural expansion on biodiversity in the tropics.

“This growth, in concert with rising per-capita consumption, will require large increases in food and biofuel production,” they write. “We foresee (i) major expansion and intensification
of tropical agriculture, especially in Sub-Saharan Africa and South America; (ii) continuing rapid loss and alteration of tropical old-growth forests, woodlands, and semi-arid environments; (iii) a pivotal role for new roadways in determining the spatial extent of agriculture; and (iv) intensified conflicts between food production and nature conservation.”

The authors cite research suggesting that global food demand could double by mid-century, necessitating anywhere from 120 million to a billion hectares of new cultivated areas. Most of the expansion is expected to occur in the tropics, where land is cheaper and recent innovations have enabled agribusiness to dramatically scale-up productivity. The Amazon and Congo Basins, dry woodlands of West Africa, and Cerrado and Chaco of South America will be particularly targeted. 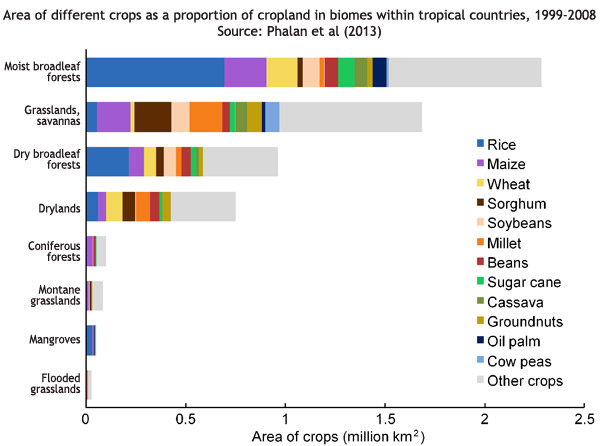 Area of different crops as a proportion of cropland in biomes within tropical countries, 1999-2008. Phalan et al (2013)

The problem, argue the authors, is these regions are characterized by high levels of biodiversity and provide critically important ecosystem functions. Therefore conversion of these habitats will have a disproportionate ecological impact.

“Tropical ecosystems are crucial for global biodiversity and provide vital ecosystem services, but are facing unprecedented pressures,” they write. “The already-massive global footprint of agriculture is expanding rapidly, especially in Sub-Saharan Africa and South America. Its impacts on terrestrial and aquatic ecosystems will be intense and increasingly pervasive.”

In other words, business-as-usual approaches to agricultural expansion seem certain to doom many species and habitats to extinction. To avoid this fate, the researchers call for new strategies that foster “more ecologically efficient food production while optimizing the allocation of lands to conservation and agriculture.”

“We can still identify urgent priorities to protect tropical nature–limiting destructive road expansion into the last surviving wildernesses; protecting nature reserves and their imperiled surrounding habitats; and working actively to slow burgeoning population growth, especially where current population trajectories are likely to elevate human suffering and environmental harm,” they write. “To avoid environmental calamity, we must achieve ambitious goals for agriculture while limiting the threats to tropical nature.”

(12/03/2013) Brazil could substantially boost its agricultural output while increasing protection of its native ecosystems, finds a new analysis published by the Climate Policy Initiative (CPI), an international think tank.

(11/21/2013) The governments of Norway, Britain and the United States pledged $280 million toward a new initiative that aims to reduce emissions associated with forest conversion for agriculture, reports Reuters. The money will come out of previously committed funds for climate change. The initiative, called the BioCarbon Fund Initiative for Sustainable Forest Landscapes and administered by the World Bank, focuses on the 80 percent of deforestation that is driven by agriculture.

Can palm oil be part of green growth in Indonesia?

(06/23/2013) As agriculture continues to expand at the expense of forests in the tropics, humanity struggles to meet environmental protection goals. Despite global efforts towards sustainable agriculture and some progress towards the gazetting of protected areas, there are as yet no general and effective solutions for meeting both conservation goals and food needs, and thus the loss and degradation of natural habitats continues. The Food and Agricultural Organization (FAO) has estimated a 70% increase in food production will be needed by 2050 to feed a population that will exceed 9 billion. How can such food production be met in ways that conserve the environment while also alleviating poverty?

(04/03/2013) A few weeks ago the Skoll World Forum hosted an online debate on how increased global consumption can be balanced with sustainability. The debate asks how a rapidly growing world that is ever consuming can hope to feed everyone, and at the same time address the deforestation that is emitting massive amounts of carbon into the atmosphere and destroying the world’s greatest tropical forests. Many contributors made very strong points—even contradicting one another in their approaches and ideas.

(03/19/2013) Croplands in the tropics expanded by an average of 4.8 million hectares per year between 1999 and 2008, increasing pressure on forest areas and other ecosystems, reports a study published in the journal PLoS ONE. The research found that soybeans and maize (corn) expanded the most of any crops in terms of absolute area, followed by rice, sorghum, oil palm, beans, and sugar cane. The countries which added the largest area of new cropland were Nigeria, Indonesia, Ethiopia, Sudan and Brazil.

(03/01/2013) I’m fortunate to travel the world helping conserve habitats for some of the world’s most iconic species. When I visit places like the Amazon and Sumatra, I’m still awestruck by their diversity and pristine beauty. I’m also reminded how threatened they are. Our growing demand for food and fiber is fueling deforestation in resource-rich regions of the world. As environmentalists, if we don’t change where and how we produce food and fiber, we can turn off the lights and go home. There won’t be any biodiversity left to protect.