Environmental groups have blasted draft text of the Trans-Pacific Partnership (TPP) released yesterday by WikiLeaks as potentially devastating to the environment and wildlife. The massive 12-nation free trade agreement has been negotiated in secret now for almost four years, and the information release by WikiLeaks shows that key environmental safeguards in the agreement are being stripped away, including a ban on shark finning and illegal logging, as well as legally-enforced pollution regulations.

“If the environment chapter is finalized as written in this leaked document, President Obama’s environmental trade record would be worse than George W. Bush’s,” Michael Brune, executive director of the Sierra Club, said bluntly. “This draft chapter falls flat on every single one of our issues—oceans, fish, wildlife, and forest protections – and in fact, rolls back on the progress made in past free trade pacts.”

The TPP has been one of the Obama Administration’s top priorities for the Pacific region, but green groups say that it looks like the administration has given significant ground on crucial environmental issues in a desire to get the deal signed, which has already run past its goal of finalization by 2013. Many past free trade agreements have wholly lacked any legally-binding environmental safeguards, but in 2007 then U.S. President George W. Bush struck an agreement with democrats to include environmental safeguards in all future free trade agreements.

However, environmentalists are now concerned that this requirement will bring about little environmental gains in the TPP. For example, the draft text completely lacks any enforcement.

“The dispute settlement mechanisms it creates are cooperative instead of binding; there are no required penalties and no proposed criminal sanctions,” says WikiLeaks. An analysis by Jane Kelsey with the University of Aukland finds that the draft text “falls far below the standards” set by the U.S. Congress in 2007.

“Negotiators are allowing a unique opportunity to protect wildlife and support legal sustainable trade of renewable resources to slip through their fingers. these nations account for more than a quarter of global trade in fish and wood products and they have a responsibility to address trade’s impact on wildlife crime, illegal logging, and overfishing,” said Carter Roberts, President of World Wildlife Fund (WWF), who called the information leak a “peek behind the curtain.”

According to the release by WikiLeaks, the TPP as it stands does not even require member nations to uphold commitments to global environmental agreements, such the Convention on International Trade in Endangered Species (CITES).

Criticism of the TPP goes well-beyond environmental issues, however. Many groups have complained of the investor-state settlement agreement in the plan that allows corporations to sue countries when contracts are breached. Critics of this model say it benefits foreign investors as they expense of human rights, working conditions, and the environment. Negotiations have also been blasted for being held completely behind closed doors, with some U.S. Senators complaining that multinational corporations are privy to the negotiations while the U.S. Congress is left in the dark. 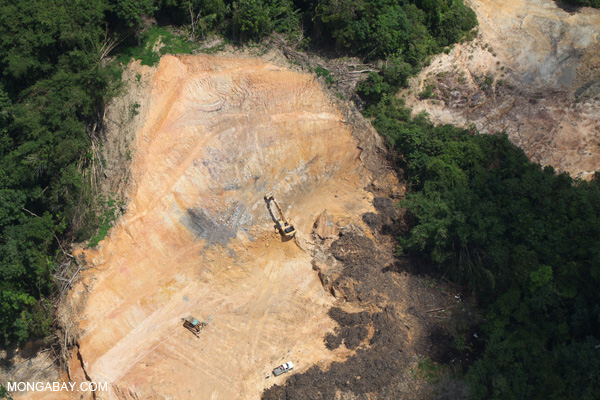 Deforestation in Malaysian Borneo. A recent analysis found that Malaysia, which is a part of the TPP, has the world’s highest deforestation rate between 2000-2012. Photo by: Rhett A. Butler.

(12/17/2013) Resolute Forest Products, the largest industrial logging company in Canada, suffered a major setback this week when the Forest Stewardship Council (FSC) revoked three certifications for the forestry giant. According to Greenpeace, the company lost its certification in Quebec and Ontario due to several problems, including a lack of consent from the Crees nations and failure to safeguard high priority conservation areas.

Average American consumes 50,000 pounds of raw materials annually for the stuff they buy

(12/10/2013) The average American car weighs about 3,000 pounds. But to produce that vehicle, a lot more raw materials were used than its final weight! Maybe as much as 100 times more, as reported by scientists in a recent paper in the Proceedings of National Academy of Science. For this car to be produced, iron ore is mined in Australia and made into steel. Steel is then shipped to Japan and made into a car, which is then sold in the U.S. Most studies until now, measured national consumption by accounting only for the final weight of the products we purchase.

(12/19/2013) Palm oil exports may drop for the first time in 16 years due to price trends in the oilseed market, reports Oil World.

(06/28/2013) With a backdrop of fires raging across oil palm and timber plantations in Sumatra, business and political leaders convened in Indonesia to discuss a path forward for producing deforestation-free commodities by 2020.

(11/02/2012) China and India, the world’s largest palm oil buyers, should reduce or eliminate an import tariff on eco-certified palm oil to boost demand for less-damaging production of the widely-used oilseed, said the President of the Roundtable on Sustainable Palm Oil (RSPO) during the body’s tenth annual meeting in Singapore.