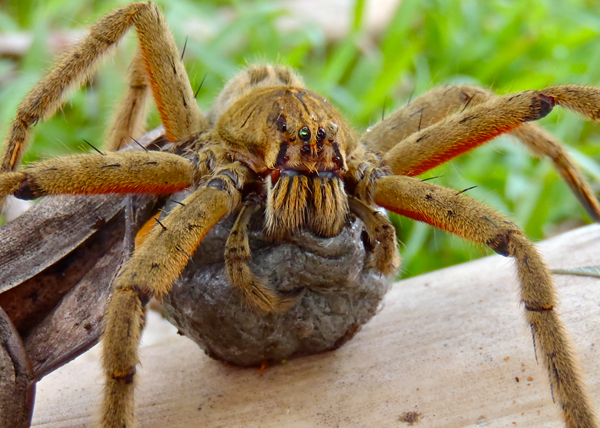 Imagine a plant. Now remove the soil, for it’s not essential. In fact, an estimated one-tenth of all plant species have liberated themselves from soil and evolved into epiphytes—plants that grow on other plants.

Although growing on others can seem parasitic, botanists have traditionally acquitted epiphytes of stealing from their hosts—except for the parasitic mistletoe—regarding them more as hitchhikers riding their host plants into the canopy for more sunlight. In short, epiphytes usually gain without costing their hosts. A recent study further suggests that epiphytes may even protect host trees from pest damage.

Scientists led by Edd Hammill, then a postdoctoral with University of British Columbia, surveyed bromeliads on orange trees in Costa Rica to study the relationship between bromeliads and host trees. Bromeliads (family Bromeliaceae) are herbaceous plants native to Florida, Central and South America; according to conservative estimates by the Marie Selby Botanical Garden in Florida, half of the 3,352 bromeliad species are epiphytic.

“Within the forests, densities of bromeliads and other epiphytes can become very high,” says Hammill who wondered if host trees benefited from shouldering so many extra burdens. An earlier study in natural forests showed that bromeliads can attract ants that then deter herbivorous beetles from the host trees. Forest ecosystems, however, complicate investigation. So, Hammill turned to pesticide-free orange farms—a much simpler ecosystem—next to the forests for clues.

Hammill located ten orange trees without bromeliads and twenty each with a large Vriesa bromeliad (over 30cm diameter). Vriesa were the most common bromeliads on the orange trees. Half of the trees with Vriesa had predatory trap-jaw ants, Odontomachus, nesting in the bromeliads whereas the rest were ant-free. Hammill measured damage on orange tree leaves near the Vriesa (within 50cm radius) and those farther away (over 150cm).

In the presence of bromeliads that housed trap-jaw ants, Hammill found that herbivores spared nearby leaves (2.5% damage) but attacked leaves further away (22.5% damage). Expectedly, most herbivores would not linger near bromeliads colonized by ferocious trap-jaw ant that earn their names with jaws that snap 1,000 times faster than an eye blink. But away from their bromeliad colonies, the trap-jaw ants’ influence waned and herbivores damaged leaves.

“This posed an interesting problem,” says Hammill “as the ants often forage far from their nests.”

The ants however, do not forage equally across the tree, instead spending more time around their bromeliad nests. Hammill says that “increased level of ant presence near the bromeliads” might explain the lower leaf damage observed there.

As early as the Fourth Century, citrus farmers have been using ants to fight caterpillar pests. That this ancient practice might be bolstered with bromeliads is a new and—Hammill agrees—untested idea.

Current agronomic practices like pruning and pesticides can discourage bromeliads from citrus trees, adds Professor J. Howard Frank, entomologist at University of Florida. Frank further warns that encouraging bromeliads might even backfire if “the pests were mainly scale insects and mealybugs”—referring to insects that suck plant sap and produce honeydew to feed the ants that guard them. 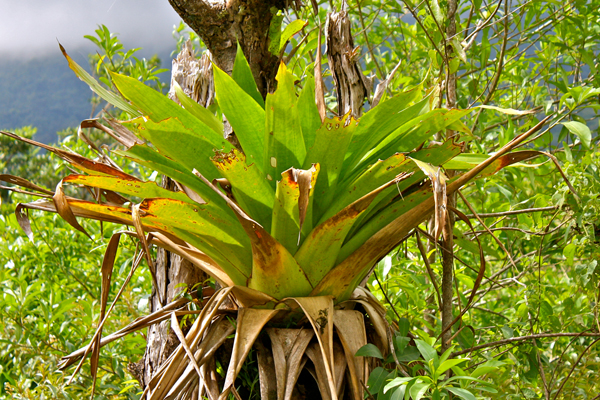 Yet bromeliads might offer more than just ants. On orange trees without ants, leaves close to bromeliads suffered minor damage (6%) whereas those farther away suffered herbivory (16%) as high as leaves on trees without bromeliads. Bromeliads seem to protect tree leaves even without trap-jaw ants.

“Bromeliads serve as a shelter for many predators,” says Hammill who has found spiders and scorpions in bromeliads. These predators do not seem to share bromeliads with ants, and might function like ants to deter herbivores.

Hammill however, will not advocate farmers to adopt bromeliads yet, though he says locals farmers appear open to it. He recognizes that his survey cannot confirm mutualism between bromeliads and orange trees. For that, he hopes to secure funding to manipulate removal/addition of bromeliads on trees and examine consequent effects on host trees.

“I believe our study to be the start,” says Hammill, now with University of Queensland, “rather than the end of this story.” 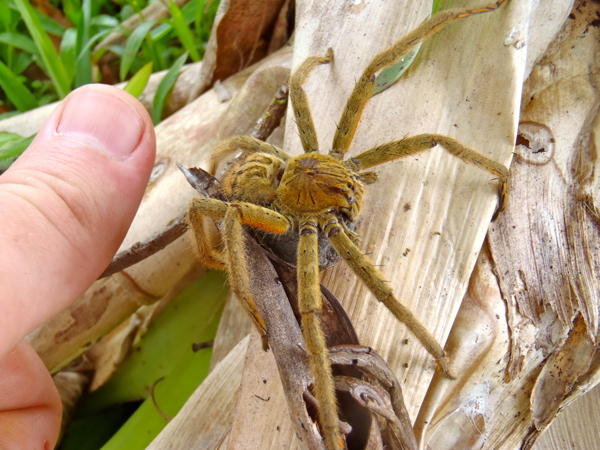 A ctenid-spider with thumb for scale. Photo by Edd Hammill.

In the tropical forests beyond the farms, mutualism among ants, epiphytes and host trees is “probably a widely occurring phenomenon,” according to Emeritus Professor David Benzing of Oberlin College. Benzing, who has authored books on bromeliads, adds that organisms interact in all manners from parasitism to mutualism, and that Hammill has revealed “but a small part of a very complex system.”

Such interactions might be best observed among organisms that share a long co-evolutionary history, prompting Bruce Holst, research director at Marie Selby Botanical Garden, to suggest that Hammill examine bromeliad relationships with native host trees instead of the Asia-originated orange tree.

Stereotyped as parasites by most people and treated as impartial hitchhikers in ecology textbooks, epiphytes turn out to be all these and mutualistic too. Adaptations in nature “clearly wander in and out of the cut and dried target roles,” says Prof. Daniel Janzen, an influential tropical ecologist, “that humans would like to think can be used to categorize things.”

(11/08/2011) Tree shrews and nocturnal rats in the forests of Borneo have a unique relationship with carnivorous pitcher plants. The mammals defecate, and the pitchers are happy to receive. A study published on May 31 in the Journal of Tropical Ecology shows a species of giant mountain pitcher plants (Nepenthes rajah) supplements its diet with nitrogen from the feces of tree shrews (Tupaia montana) that forage in daylight and summit rats (Rattus baluensis) active at night. When the small mammals lick nectar from the underside of the pitcher’s lid, they stand directly over the jug-shaped pitcher organ.