Last month was the warmest November on record, according to new analysis from the NOAA. Temperatures were 0.78 degrees Celsius (1.40 degrees Fahrenheit) above the average November in the 20th Century. Global temperatures are on the rise due to climate change caused primarily by burning fossil fuels, but also by deforestation and land-use change.

While parts of the US and Canada saw temperatures well below average for November, Russia was roasting, at least compared to average temperatures. Parts of Russia saw temperatures that were 8 degrees Celsius (14 degrees Fahrenheit) above average for the month. More astoundingly, November was the 345th month in a row that has been warmer than the 20th Century average.

Through November, 2013 is shaping up to tie for the fourth warmest year on record. However, recent research has challenged current temperature records as underplaying the rate of global warming due to data gaps in the Arctic. The Arctic is warming faster than anywhere else on the plant, and leaving out data here has likely underestimated the rate of warming.

The most recent report by the Intergovernmental Panel on Climate Change (IPCC) has released its first global carbon budget, which outlines how much carbon can be burnt before we cross the line into catastrophic climate change. According to the budget, the vast majority of the world’s remaining fossil fuel reserves will have to be left untouched. 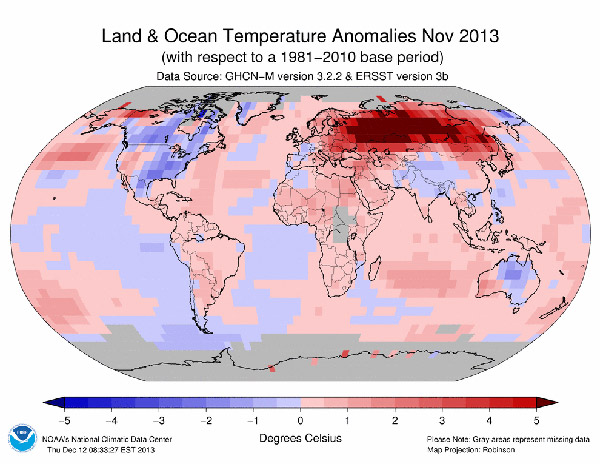 The emissions gap and the forest contribution (commentary)

(11/20/2013) Shortly before the Warsaw climate talks, the United Nations Environmental Programme (UNEP) released its Emissions Gap report, highlighting the growing gap between the emissions reductions that are needed to stay below 2 degrees and the trajectory the world is on at the moment. The report clearly identifies forests as one of the most important options to reduce emissions which can be delivered in the short term. While parties urgently need to start phasing out fossil fuels and stop emissions from fossil fuels no later than 2050, protecting forests now can help significantly to keep a realistic chance of staying below 2 degrees.

(11/19/2013) Yesterday, at the International Coal and Climate Summit—just a couple miles from the ongoing UN Climate Summit—Christiana Figueres delivered a speech unlike anything ever heard at a coal industry meeting before. Figueres, the Executive Director of the UN Framework Convention on Climate Change (UNFCCC), took time off from wrangling world leaders and officials toward a climate agreement to talk tough to an industry currently worth around $3 trillion.