Up to 1,400 hectares of forest have been cleared in a concession belonging to an Asia Pulp & Paper (APP) supplier in Borneo, potentially putting the company in breach of the forestry giant’s zero deforestation commitment, reports a coalition of local NGO’s.

In a report released Tuesday, Relawan Pemantau Hutan Kalimantan (RPHK), a coalition of NGO’s in part supported by WWF-Indonesia, said that blocks of natural forest have been cleared in a concession belonging to PT Daya Tani Kalbar (DTK), an APP supplier. The clearing has taken place since APP’s moratorium went into effect February 1, 2013.

“RPHK analyzed historical satellite images and conducted a field investigation in November 2013,” states the report. “RPHK found that ‘pulpwood plantation areas’ A, B and C identified on APP’s ‘moratorium map’ still had blocks of natural forest remaining on the day before the moratorium deadline of 31 January 2013. These blocks had disappeared by November 2013.” 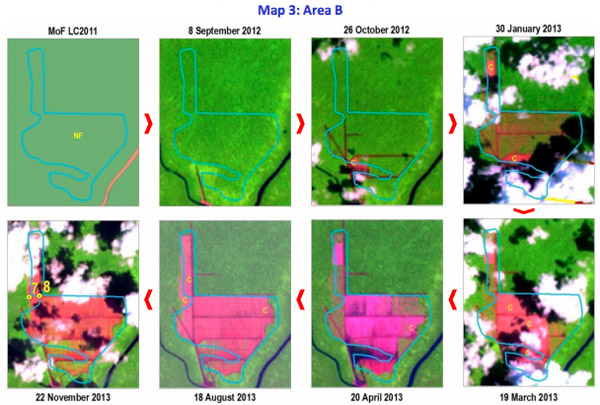 MoF land cover map for 2011 and historical satellite images between September 2012 and
November 2013 in and around the ‘pulpwood plantation’ area C delineated from the ‘moratorium map as of 31 January 2013’ published by APP. Courtesy of RPHK

APP’s forest conservation policy commits it to protecting high conservation value and high carbon stock lands, as well as mitigating conflict with local communities. The policy, which applies to all new plantation development and all of APP’s suppliers worldwide, requires assessments of natural vegetation prior to conversion. APP will only accept fiber from new plantations established on land that is classified as “old scrub” under Indonesia’s forestry classification system.

But the RPHK report alleges that no assessment was conducted in the areas cleared by DTK.

In response to the allegations, APP says it is investigating the case.

“We recently received a report by a coalition of NGOs (RPHK) raising a number of concerns about our supplier PT Daya Tani Kalbar (DTK) in Kalimantan and an alleged breach of our Forest Conservation Policy,” an APP spokesperson told mongabay.com. “Our policy is clear – no natural forest clearance is permitted anywhere in our supply chain and every supplier has been instructed accordingly.”

“We, together with TFT, are currently assessing this latest report. We will publish our findings and response to RPHK as soon as this verification process is completed.” 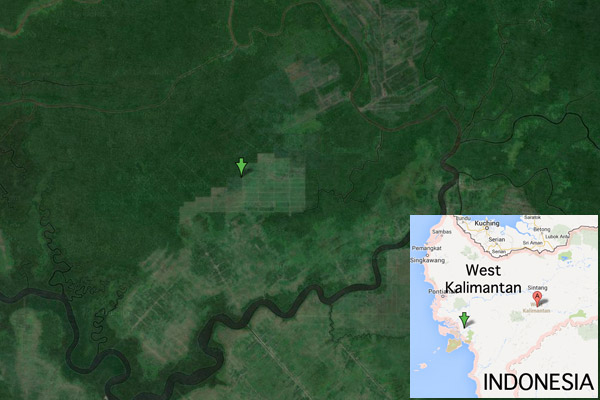 Google Map of the concession area

It is not the first issue to arise in DTK’s concession. In March, RPHK documented forest clearing in the same area. A subsequent investigation by APP and The Forest Trust (TFT), an NGO that is implementing APP’s policy, confirmed forest clearance but found that the issue was an overlapping concession license to develop the area. A palm oil company unaffiliated with DTK or APP was chopping down trees and draining peatlands to establish a plantation.

However the RPHK report says that overlapping licenses are no excuse.

“If overlapping allegation in forest clearance is proved true, then it shows failure of PT DTK in fulfilling its legal obligation to prevent illegal logging and illegal land clearing its own concession.”

RPHK adds that DTK, along with other APP suppliers, accelerated natural forest conversion ahead of the forest conservation policy’s adoption.

“Much more natural forest apparently could have been saved had the company not initiated a last minute rush to clear natural forest before the moratorium deadline,” said the report. “In September 2013, the company revealed that 15 suppliers cleared much more tropical forest wood than APP’s pulp mills used.”

But Scott Poynton, the head of TFT, urged withholding judgement until a field visit has been conducted.

“No doubt it’s deforestation, we just need verification of who is guilty of doing it,” Poynton said via Twitter. “Field visit is underway” 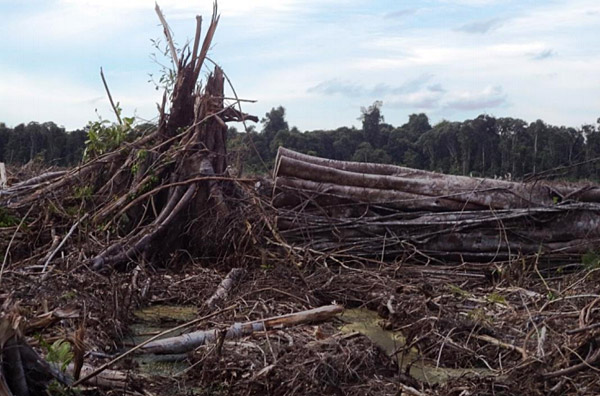 While the new allegations are bound to raise concerns among some environmental groups on APP’s commitment to conserving forests, they also illustrate the complexity of implementing the policy across a web of suppliers and hundreds of thousands of hectares of undeveloped concessions. For its part, APP has set up systems for handling complaints and resolving conflicts brought to light by NGO’s. Lately APP has been working with both TFT and Greenpeace, a traditional adversary that ran a damaging three-year campaign against the paper products giant, to address issues that arise.

Greenpeace’s engagement with APP and WWF’s emergence as a fierce critic represent an unusual role reversal for the groups, but both agree that market transformation is critical to addressing deforestation, which is increasingly driven by industrial actors, rather than subsistence farmers. Private sector leadership from forestry and plantation companies, which heavily shape Indonesian forest policy, is seen as key to shifting the country away from the business-as-usual approaches that have wrecked almost half the archipelago’s forests since 1950. Therefore recent commitments from APP, Indonesian palm oil grower Golden Agri-Resources, and palm oil trader and producer Wilmar are generally viewed positively as progress toward that end. Holdouts like Bumitama, Duta Palma, and APP’s top competitor, APRIL, are increasingly targeted by environmentalists for failing to adopt stronger sourcing safeguards.

(04/29/2013) In February, Asia Pulp & Paper, one the world’s largest paper producers, announced a forest conservation policy that would effectively exclude fiber sourced through conversion of rainforests and peatlands. The announcement however was met by skepticism by many in the environmental movement due to APP’s failures to abide by previous commitments to avoid rainforest logging.