Are there economic alternatives to palm oil?

Community embraces ecotourism instead of deforestation for palm oil. Community-based Borneo rainforest tourism at its best

Replacing rainforests and peatlands with oil palm plantations is ecologically devastating at the local scale. Oil palm plantations are biological deserts compared to the forests they replace. They can spur water pollution and are a substantial source of greenhouse gas emissions. At best, an oil palm plantation sequesters 40 tons of carbon per hectare over its effective lifetime. A tropical forest is at least five times that. A peat forest may store ten-fold that amount of carbon.

But arresting palm oil-driven deforestation is challenging. Palm oil is simply the most profitable form of land use across much of rural Southeast Asia. For many communities, the decision to embrace converting community forest lands to a plantation — when the choice is theirs to make — boils down to economics: palm oil can be an easy source of money, especially in areas where unsustainable logging has exhausted local timber resources and the traditional value of forest resources has been lost or forgotten.

However one project I visited in Malaysian Borneo is demonstrating that community-managed ecotourism can yield healthy returns without destroying native forests. The MESCOT project is a cooperative run by the Batu Puteh community on the lower Kinabatangan River, a region that has lost much of its forest cover to oil palm expansion. Batu Puteh has more than 260 members from four villages: Batu Puteh, Mengaris, Perpaduan, and Singgah Mata. Members buy into the cooperative — known as KOPEL — and receive payouts based on their shares. For example, in 2011 KOPEL generated some 1.4 million Malaysian ringgit ($467,000) or about $1,800 per member. The initiative also yields benefits in the form of some 300 jobs and a microcredit facility. 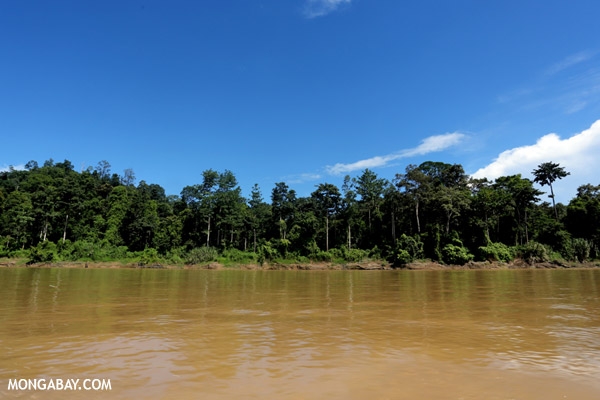 Rainforest along the lower Kinabatangan River. All photos by Rhett A. Butler

It’s easy to see why the ecotourism part of MESCOT is succeeding. The forest that remains in this part of the Kinabatangan is full of wildlife. Pygmy elephants pass through the area during the migration, while orangutans, proboscis monkeys, hornbills, and other species are always present. There are well-maintained trails through MESCOT’s forest and peatlands, while the local guides have rich knowledge and awareness of the habitat. MESCOT also offers a variety of activities, from jungle treks to river trips to visiting a local cave system. The project makes for a low-key and more authentic alternative in comparison to some of the Disneyland-like commercial operators elsewhere along the river.

Come prepared. Visiting MESCOT is not like staying in a hotel or a high-end jungle lodge — you are a step away from camping in the rainforest. So bring wet weather gear, a flashlight, and closed toe shoes. You will sleep under mosquito nets in raised platforms in the rainforest. There is a communal bathroom and no electricity on the platforms. If you want luxury in the Borneo rainforest, go to Danum Valley. MESCOT is a different experience, but one that can be very rewarding as the following pictures can attest.