Scientists: to save the Malayan tiger, save its prey

A major premise of biology, as any high-schooler can tell you, is the study of the connections between organisms. Perhaps nowhere is there a better example of this than in Malaysia, where the population of Endangered Malayan tigers (Panthera tigris jacksoni) is being undercut by dwindling prey.

A recent study by MYCAT, the Malaysian Conservation Alliance for Tigers, highlights this connection by presenting a distinct correlation between prey and tiger population. Although this connection might seem obvious, MYCAT is using their data to implement meaningful conservation reforms in Malaysia. 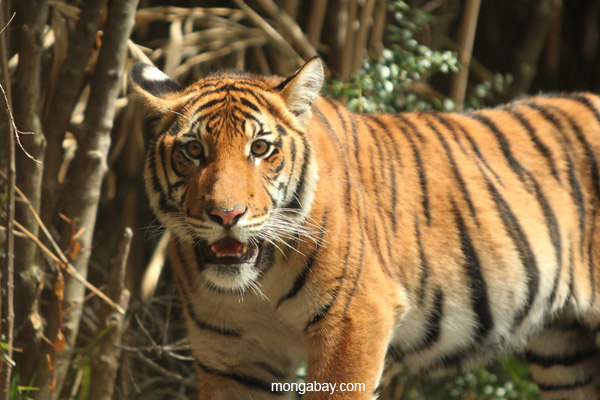 The team, lead by Dr. Kae Kawanishi, took a total of 10,145 wildlife photographs over the course of 40,303 nights of camera trapping. These revealed striking numbers in prey-species trends. The species least-detected – sambar, bearded pig, and gaur – were especially rare in unprotected forests. Although the gaur and bearded pig have some protection under Malay law, the sambar has none.

However, the study admits that the data was not perfect, stating that it used “BAD [Best Available Data] for good.” The study’s numbers are based on the assumption that actual population size had a “positive and constant relationship” with the rate of photos taken, according to the study, and, “detection probabilities were assumed to be constant temporally and spatially for our [focial species].” The MYCAT team prioritized speed over thoroughness in order to pass conservation legislation faster by using the Best Available Data.

Although a longer, more thorough project would have been ideal, the “potential for tiger prey populations to be completely depleted in a relatively short time was seen as sufficient reason to use the best available data to help conserve the tiger and associated prey species.”

A MYCAT press release from August, 2013, calls for “urgent and decisive action to save the sambar deer, a critical food source for wild tigers.” Although a six-year hunting moratorium of the sambar was established in 2009, scientists have detected little population recovery and suspect the lack of improvement is due to poorly enforced environmental laws. 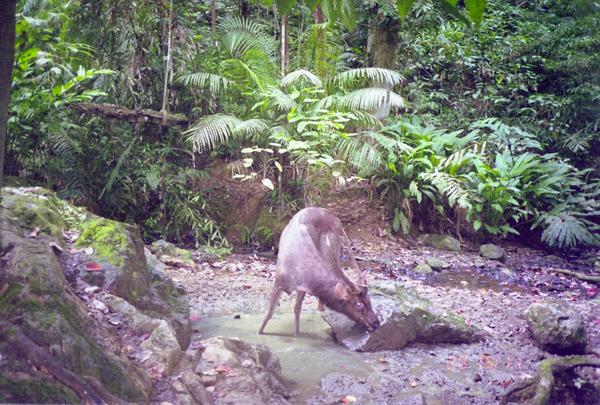 A camera trap photo of a sambar deer. Photo by Kae Kawanishi.

Using their collected data, MYCAT and other organizations are now demanding that the sambar deer gain legal status as a “totally protected” species, with hunting or trade of the sambar punishable by a $90,000 fine, and/or 10 years in prison.

“The two species are inextricably linked,” stated WWF-Malaysia’s tiger biologist, Mark Rayan. “If sambar deer numbers go down, tiger numbers will too and the evidence is already pointing in that direction.”

Such demands for further protection take inspiration from previous conservation policy changes implemented via best available data. In 2008, MYCAT and other NGOs lobbied to improve the outdated Protection of Wild Life Act of 1972. Using public-support campaigns and petitions, the law was eventually updated and passed as the Tiger Action Plan. It was improved again in 2010 under the Wildlife Conservation Act, under which the bearded pig, another tiger prey species, received the highest protection status.

“We have demonstrated that best available data can sometimes be used to improve legal protection of threatened mammals when baselines are absent,” concluded the MYCAT study. “Despite the shortcomings of our assessment, a combination of long-term biological information, cooperation, public awareness and determination eventually lead to changes.”

Featured video: how tigers could save human civilization

(08/29/2013) In the video below, John Vaillant, author of the The Tiger: A True Story of Vengeance and Survival, tells an audience at TEDxYYC about the similarities between tigers and human beings. Given these similarities—big mammals, apex predator, highly adaptable, intelligent, and stunningly ‘superior’—John Vaillant asks an illuminating question: what can we learn from the tiger? It turns out learning from tigers could help conserve the human race.

(07/12/2013) Five men were finally rescued on Monday after spending five days trapped in a tree by a group of Sumatran tigers. A team of around 30 people rescued the men after several tiger tamers were able to lure the animals away using chants and mantras. The men were attacked inside Aceh’s Gunung Leuser National Park by a mother tiger after accidentally killing its cub in a trap the group had set to hunt deer. The tiger killed one of the men, 28-year-old David, and forced the others to escape up a tree.