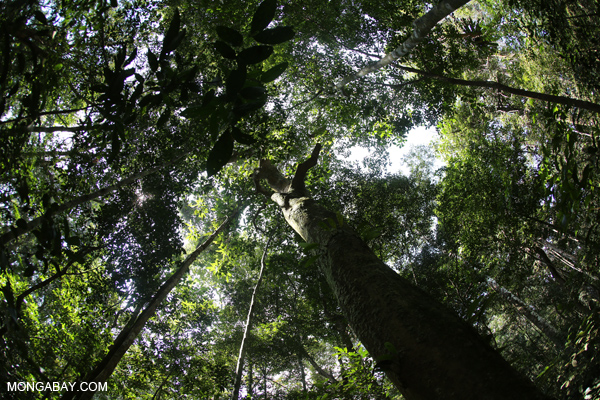 Asia Pulp & Paper (APP), an Indonesian forestry giant once notorious for destroying rainforests and peatlands, is making ‘encouraging’ progress in phasing forest destruction out of its supply chain, reports a new assessment from Greenpeace, which until recently was one of APP’s fiercest critics.

The review, released today, evaluates APP’s progress on its Forest Conservation Policy (FCP), which commits the company to exclude fiber sourced from logging of natural forests and conversion of peatlands, and requires it to obtain Free, Prior Informed Consent (FPIC) from local communities in developing new plantations.

The report finds that APP has been largely successful in implementing its moratorium on forest conversion, with the exception of 140 ha that were cleared under special circumstances and were voluntarily disclosed by the company. Greenpeace says APP is also making progress in the area of conflict resolution, including the signing of an agreement to settle a long-running dispute in Jambi.

But the report wasn’t all rosy. Greenpeace said APP need to “accelerate implementation” of its commitment to preserve carbon-dense peatlands and improve transparency around fiber sourcing for its operations in China, citing concerns that timber from high conservation value forests in other parts of Southeast Asia could end up feeding APP’s huge paper mills. APP’s forest conservation policy applies to all of its fiber sourcing worldwide.

“Greenpeace believes that nine months in, APP is serious about its Forest Conservation Policy and its key senior staff are genuinely committed to driving the delivery of these new commitments,” said Greenpeace in a statement. “But APP’s commitment is likely to stand or fall, depending on the quality of recommendations from external assessors, and if they stand up to scrutiny and are fully implemented.”

APP welcomed the report, calling scrutiny from Greenpeace — “a once extremely hostile critic” — and other NGO’s “an important driver of our progress towards No Deforestation and greater transparency.”

“It is very encouraging that Greenpeace’s report recognizes the progress we have made since introducing the FCP just nine months ago,” said Aida Greenbury, APP’s managing director of sustainability, via email. “We know that many years of work lie ahead, but this report has given us additional confidence that we are on the right path as we aim to put a permanent end to deforestation in our supply chain.”

APP issued its own report in response to Greenpeace’s review, laying out how it will address each of the concerns raised, including releasing more details about overlapping concessions — a major problem in Indonesia — and establishing a team of peatlands experts to help the company adopt best practices for peat management. APP said its suppliers for its Chinese operations are undergoing a review of the compliance with the forest conservation policy.

“APP fully recognizes the scale of the task ahead and that many challenges remain,” the report stated. “We will play our full role in meeting, and where possible, exceeding, the expectations of many of our stakeholders. We hope to continue to work in close partnership with Greenpeace and other groups to achieve our shared goal of ending deforestation wherever we operate.”

Greenpeace, which suspended its APP campaign in December 2012, said the progress and commitment at high levels of management suggest that the “risk of APP again reneging on its promises appears limited at this time.” Prior to 2013, APP had failed to live up to three previous commitments to phase out conversion of natural forests for fiber production.

Nonetheless, given APP’s track record and the challenges of implementing a forest conservation policy across some 2.6 million hectares and myriad subsidiaries and suppliers, Greenpeace isn’t quite ready to give APP the “all clear” sign. Instead the activist group is urging potential buyers to apply an extra level of due diligence when dealing with APP.

“Greenpeace cautions that any company intending to resume any trade with APP must apply strict conditions to commercial contracts requiring continued progress be made against the policy and the outstanding policy issues in Greenpeace’s review,” said the group, which added that APP still needs to make amends for past forest destruction.

“To address APP’s previous deforestation legacy, the company must develop a landscape-level conservation initiative in the areas where its suppliers operates in Indonesia,” said the report. “It is Greenpeace’s view that APP should align itself with the ‘significant conversion’ threshold established by the Forest Stewardship Council (FSC),” which holds that a company conserve or restore an area that is “equivalent in conservation value to at least the last five years of clearance across its supply chain.”

Such a commitment would likely represent tens of thousands of hectares of forest and peatlands in Indonesia. It would also set APP apart from its top competitor, Asia Pacific Resources International Limited (APRIL), which continues to be the target of environmental campaigners for its ongoing destruction of peatlands and rainforests in Sumatra.