New research highlights the world’s most (and least) vulnerable ecosystems to climate change. The study, published in Nature Climate Change, is the first to combine anticipated climatic impacts with how degraded the ecosystem is due to human impacts, creating what scientists hope is a more accurate list of vulnerable regions. The most endangered regions include southern and southeast Asia, western and central Europe, eastern South America, and southern Australia.

James Watson, lead author of the study, says the research is meant to provide “clarity” on “where limited resources will do the most good” in safe-guarding vulnerable ecosystems in a warming world.

“We need to realize that climate change is going to impact ecosystems both directly and indirectly in a variety of ways and we can’t keep on assuming that all adaptation actions are suitable everywhere. The fact is there is only limited funds out there and we need to start to be clever in our investments in adaptation strategies around the world,” says Watson, the Director of Wildlife Conservation Society’s (WCS) Climate Change Program.

Watson and his team began by evaluating the stability of ecosystems under future climate change scenarios, given that some ecosystems are expected to undergo more drastic changes than others. For example, the Arctic is expected to undergo some of the most drastic changes due to warming. But then the researchers combined these findings with how much of the ecosystem remains intact, theorizing that in more intact ecosystems species will be better able to adapt. The result points to region that have already been heavily degraded–such as southeast Asia and western Europe–and have at least moderate sensitivity to climate change.

The least vulnerable areas, in terms of both climate impacts and current degradation, include southern South America, the Middle East, northern Australia, and southwestern Africa. 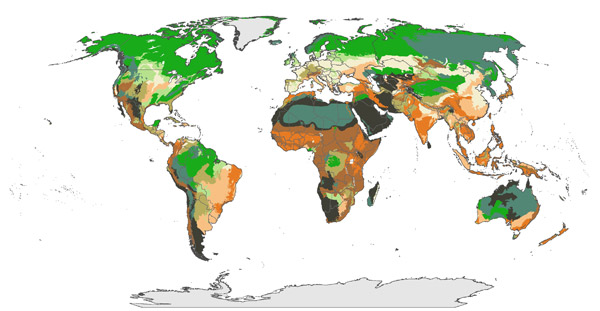 Most vulnerable regions are cream colored, while least vulnerable are dark gray/black. Regions that are heavily degraded but should retain stable climates are dark orange, while those that are relatively intact but are expected to be sensitive to climate change are dark green. Map courteys of Watson et al.

(09/12/2013) Climate change may push canopy-dwelling plants and animals out of the tree-tops due to rising temperatures and drier conditions, argues a new study published in Proceedings of the Royal Society B. The development may be akin to ‘flattening’ the tiered vegetation structure that characterizes the rainforest ecosystem.

(09/04/2013) Climate-conscious folk agree that atmospheric carbon concentration is a key greenhouse gas and a large factor in global climate change. However, there are discrepancies in the methods chosen to address the problem. Some say that carbon emissions should be banned. Some say fossil fuels should be priced. Others say that there are nuances within each. Which tools can we realistically use to mitigate climate change and the drastic effects it will have on our world?

(08/22/2013) We now live in a world dominated by humans (the Anthropocene), whose activities on Earth are resulting in new habitats and new environmental conditions including climate change. To many, the Anthropocene is an era of environmental doom that unless reversed, will result in catastrophic reductions in biodiversity. An alternate view is that the biota will adjust to the new environmental conditions and through processes of species mixing and self-organization will form sustainable novel communities of organisms.