On Friday R&B singer, Rihanna, posed in Thailand with a slow loris, an endangered primate that is often illegally touted on the streets of Southeast Asia by pet dealers. The picture, which the celebrity shared on instagram, went viral, and over the weekend Thai police arrested two men—one 20 and one 16—who allegedly provided the slow loris to the Rihanna for the impromptu photo.

Lorises have become increasingly imperiled in recent years due to the illegal pet trade, after a number of YouTube videos showed the animals as “pets.” According to loris expert, Anna Nekaris, poachers steal baby lorises from the wild, often killing their mothers in order to take the young. The young loris then have their teeth pulled out with pliers or other implements in order to make them more appealing to pet owners—and less likely to deliver a poisonous bite. Many of them don’t survive the harsh conditions and unsuitable diets long enough to be sold. Poachers have to keep up a steady stream of smuggled lorises, since they are practically impossible to breed in captivity.

Rihanna tweeted the photo taken in Phuket, Thailand and wrote: “Look who was talkin dirty to me!”

In this case, her jest may have had an unintentional ring of truth. In the wild slow lorises are cleaned by their mothers, but as orphans, young loris are unable to clean themselves and are often covered in their own urine and feces. 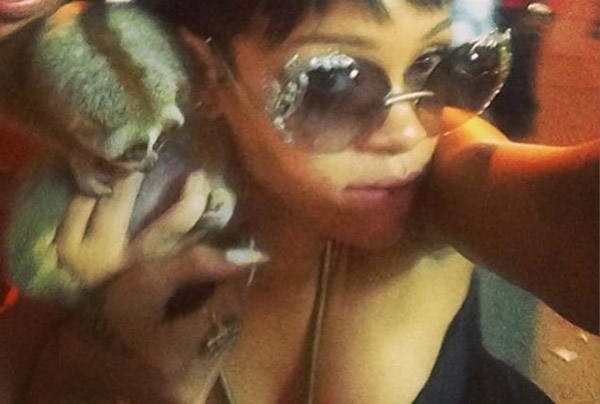 Pop singer Rihanna with a slow loris that had been stolen from the wild and touted in Phuket, Thailand as a tourist attraction. Photo by: Badgalriri via Instagram.

“More than 200,000 of Rihanna’s followers have seen her instagram post. The power if celebrity to endorse behaviour can be seen yet again, with the majority of responses supporting her behavior,” Nekaris told mongabay.com.

Scientists have documented ten species of loris to date, seven of which have been assessed by the IUCN Red List. Of these, six are currently considered threatened: two are listed as Endangered and four as Vulnerable.

“With the charity Love Wildlife, the Little Fireface Project has just started a rescue centre for lorises on Phuket,” Nekaris says. “Though already 60 lorises have been confiscated, we await prosecution of the touts, who can be back on the streets the next day. Almost all the lorises confiscated have their teeth clipped so they can not bite tourists and now require lifelong care.”

Lorises are the world’s only venomous primates, a potent ability they use to keep possible predators at bay. Nocturnal, they are highly adapted to scouring trees for insects and fruit. They are found only in Central and Southeast Asia, and in addition to being imperiled by the illegal pet trade, many species are also vanishing due to deforestation and consumption as traditional medicine.