The world’s species are in worse trouble than widely-assumed, according to a new paper in the Proceedings of the National Academy of Sciences (PNAS), which reevaluates how scientists estimate extinction rates. The new model takes into account the impact of forest fragmentation on extinction rates for the first time, filling in a gap in past estimates. Much of the world’s tropical forests, which house the bulk of the world’s species, have been whittled down to fragments: small forest islands that no longer connect to larger habitat. According to the paper, species confined to fragments have a higher likelihood of vanishing.

“Many forest regions, such as the Atlantic Forest region in South America, have been reduced to a small fraction of their original extent, and these forests are typically highly fragmented. Our results suggest that, in this situation, if one ignores the effect of fragmentation one is likely to underestimate extinctions,” lead author Ilkka Hanski with the University of Helsinki explained to mongabay.com.

For decades scientists have used a model known as species–area relationship (SAR) to estimate how many species will vanish when habitat is lost. According to conventional SAR, if 90 percent of a forest is destroyed, around half the species would vanish, although it will take several generations. But the model only looked at total land area remaining, and not whether the land remaining is in one large patch or several small disconnected patches. However, some species are more vulnerable to extinction when caught in a forest fragment.

“For communities of species that are not well adapted to live in fragmented landscapes, the conventional SAR underestimates the number of extinctions for landscapes in which little habitat remains and it is highly fragmented,” Hanski and his colleagues write in the PNAS paper, adding later that, “Fragmentation matters when the local populations inhabiting individual habitat fragments have a substantial risk of extinction. In general, extinction risk increases with decreasing fragment size.” Aerial view of forest fragment in Costa Rica. Photo by: Rhett A. Butler.

The researchers then took the theoretically model and applied it to bird species in the Atlantic Forest as a real-world comparison. Today, less than 7 percent of the Atlantic Forest remains, which once covered the entire coastline of Brazil. But most of what remains today survives in small, disconnected fragments.

“We found that when there is relatively little forest left, say less than 20 percent of the total landscape area, the numbers of species going extinct is increased by high degree of fragmentation,” Hanski says.

Furthermore when only around 10 percent of the landscape is left, most forest-specialist animals and birds are no longer capable of longterm survival. Forest fragments are also more prone to damage from winds, fire, and overhunting. Of course, the Atlantic Forest (also known as Mata Atlantica) is not the only tropical forest suffering from heavy fragmentation. Across Southeast Asia, rainforests have become fragmented for monoculture plantations such as palm oil, rubber, and pulp-and-paper as well as agriculture and urbanization. Fragmentation is also a problem in much of Africa where agriculture has pushed many species into small patches, especially along coastal and mountainous East Africa.

Stuart Pimm, a professor of Conservation Ecology at Duke University, who was not affiliated with the new paper but has done considerable work on species-area relationships, told mongabay.com that he agreed with the paper’s findings.

“Most extinction black spots are in massively fragmented landscapes. We have to understand the role of fragmentation in driving extinction. We know from the pioneering work started by Tom Lovejoy in the Amazon, and to which my group has contributed, that the smaller the fragment, the more species it loses and the faster it loses them.”

Pimm says the new paper helps take into account small-ranged species, i.e. those animals who survive in small habitats and therefore are most at risk from when forests are fragmented.

“We’ve known for a long time, that species differ greatly when it comes to extinction risk. Species with large geographical ranges fare much better than those with small ones. […] It’s much easier to destroy a species with a small range than one with a large one,” he says. “So, we worry a lot about mapping out where the small ranged species are, not just where the most species are.”

Palm oil production has created forest fragments across Malaysia and Indonesia. Photo by: Rhett A. Butler.

The new study also adds to the debate about the extent of the current extinction crisis. Scientists agree that the world is either in the midst of or entering a mass extinction with untold impacts for the world’s ecosystems. However, the immediate scale of the crisis and, in particular, the accuracy of the species-area relationship model has been questioned in the past. In 2011, a high profile paper in Nature argued the species-area relationship had overestimated extinctions by up to 160 percent. While the paper, by Fangliang He and Stephen Hubbell, didn’t dispute that Earth’s biodiversity was facing a mass extinction, it argued the situation wasn’t as critical as had been portrayed. However, immediately upon release the paper came under fierce criticism from a broad array of scientists, including from Stuart Pimm.

But Pimm says Hanski’s new paper helps “correct in some important detail” the 2011 He and Hubbell study by finding that extinction rates have not been overblown, but in fact underestimated.

“I think [the paper is] exactly right in showing that my ‘conventional SAR’ are conservative, indeed, I would expect that,” Pimm says, adding the study is “a hugely important connection between deforestation, fragmentation, and species loss […] It substantially helps our understanding of the major processes of species extinction in tropical forests.”

However, the bleak findings in the study do not mean that species in fragments are doomed, instead Hanski says the paper should make policy-makers sit up and take notice.

“Fragmentation matters,” he says, “and we should aim to reduce the degree of fragmentation to enhance the chances of specialist forest species surviving.”

Conservationists have long-championed connecting forest fragments via corridors that allow species to move back-and-forth. Some corridor plans are simply about reconnecting one forest fragment with another, while others are more ambitious. For example, conservation group Panthera has proposed a Jaguar Corridor that would connect forests throughout Central and South America in order to conserve the big cat, the prey it depends on, and thousands of other species.

“Because fragmentation is so common, and because the adverse effects of fragmentation can be so drastic to the survival of species, conservation should pay close attention to fragmentation,” says Hanski. 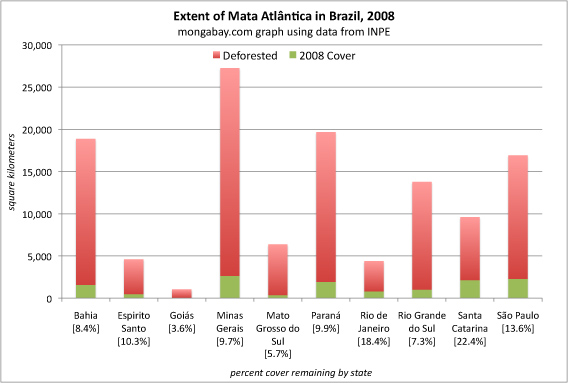 (03/19/2012) Forest fragments along riversides in Uganda may make good habitats for chimpanzees but remain unprotected, according to a new study in mongabay.com’s open access journal Tropical Conservation Society (TCS). Researchers surveyed a riverine forest known as Bulindi in Uganda, in-between Budongo and Bugoma Forest Reserves, to determine if it was suitable for the long-term survival of eastern chimpanzee (Pan troglodytes schweinfurthii) populations.