Police in Indonesia’s Aceh province are investigating the killings of three critically endangered Sumatran elephants, as conflicts with humans led to a series of elephant deaths across the province last month. Five elephants have died in Aceh since late June, including two orphaned calves, highlighting the need to mitigate conflicts between elephants and local communities as deforestation drives the animals into villages and plantations in search of food.

Residents of Ranto Sabon village in Indonesia’s Aceh province have handed over to authorities the tusks of a 22-year-old Sumatran elephant (Elephas maximus sumatranus) named Genk that was found dead in their village last month. The villagers admitted en masse to the killing, stressing that they were not after the ivory but were fed up with the elephant destroying their crops.

“Our motive was not to look for money,” said Keuchik Amiruddin, the village head of Ranto Sabon, as quoted by Mongabay-Indonesia last week. “If we wanted to hunt for ivory we would not have killed the elephant in the village, but in the forest.”

Amiruddin submitted the tusks to the Aceh Jaya District Police as evidence on August 3, along with a spike that was presumably used in a spear trap. The village head and 20 other local residents admitted to killing Genk, who was found dead in Ranto Sabon on July 13. “We set the traps together after we could no longer take the frequent disturbances by the elephant that ruined our crops,” Amiruddin said after turning the tusks over to police. 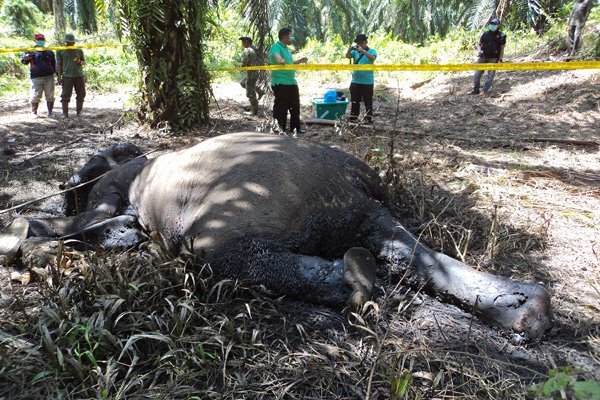 Elephant killings are fairly common in Aceh – last year 14 elephants died in the province, most from eating poison on palm oil plantations – and perpetrators are rarely brought to justice. However graphic photos of Genk’s death caused outrage among Indonesian Twitter users, whose comments on social media eventually led the country’s president, Susilo Bambang Yudhoyono, to call for an investigation through his Twitter account.

Police have said from the beginning that they intend to take legal action against Genk’s killers, but villagers initially resisted investigation efforts. Protests by residents at the nearby Conservation Response Unit (CRU) elephant sanctuary even prompted the evacuation of CRU staff and six captive elephants. When Genk was killed in July, it was CRU rangers, who had been patrolling the area in an attempt to drive the elephant from the village, who discovered the body.

“[W]hen [we] wanted to investigate the unexpected killing of the elephant there was resistance from the community,” said Commissioner Gustav Leo, Aceh Police head of public relations. “The conditions there were not conducive to the point the residents drove away the staff and elephants that were in the CRU.” 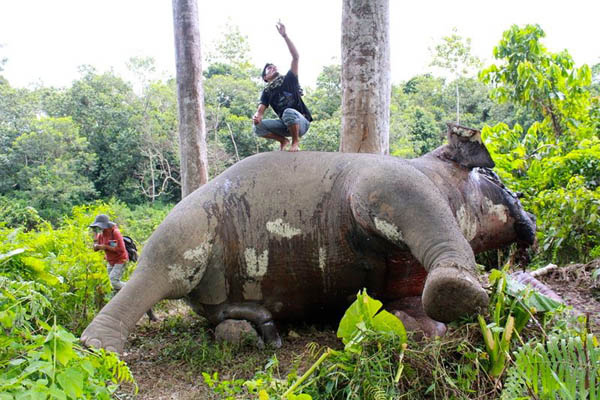 Genk, was found dead in Aceh Jaya. The Ministry of Forestry and local police are now investigating. Photo: Fakhrizan Mahyeddin

The first elephant, estimated to have been six or seven years old, was found on July 25 in a plantation block in Bireuen Bayeun subdistrict. The animal’s body was rotting and it was thought to have died 10-15 days before it was found. Two days later, another dead elephant was found floating in a river in nearby Rantau Selamat subdistrict, just a half hour by motorbike from site where the first elephant’s body was found in Bireuen Bayeun. Suspects in both cases are currently under investigation, Mongabay-Indonesia reported last week.

Meanwhile, Raju, a baby Sumatran elephant who was rescued in late June from a village in North Aceh district, died in the PKG Saree elephant rescue center on July 22.

Raju, together with a two-year-old elephant named Raja, had earlier been held by residents of Blang Pante village. The residents refused to hand the calves over to authorities unless the government agreed to compensate the village for property and crops destroyed by adult elephants. However, after Raja’s sudden death on June 21, social media activists were able to help convince the residents to surrender Raju.

Raju was evacuated to PKG Saree on June 27, and rescuers were initially hopeful that the young calf would survive. However, after nearly four weeks at the center, Raju began suffering from severe diarrhea and died three days later, despite receiving treatment from veterinarians and handlers at the center.

Raju may have been just a few days old when he was found without his mother or herd in a forest near Blang Pante. According to Rosa, a veterinarian at PKG Saree, being separated from his mother at such a young age left his immune system weak. “Our experience is that baby elephants [up to] two years old can die suddenly, even more so if they are very small,” Rosa told Mongabay-Indonesia. “He had not gotten antibodies from his mother’s milk, so it was easy for him to fall ill from disease.” Some Blang Pante villagers believe Raju’s mother may have died from eating poison, much like the elephants found dead last month on the PTPN I plantation.

Aceh forests are a key habitat to Sumatran elephants as well as other protected species including Sumatran rhinos, Sumatran orangutans and Sumatran tigers. The province has some of the most extensive forest cover left on the island of Sumatra, however, deforestation from palm oil and mining is putting pressure on elephant habitats. Despite efforts by rangers and conservation police to keep elephants out of inhabited areas, conflicts between humans and elephants are increasingly common. In Aceh Jaya district, where Ranto Sabon village is located, CRU rangers use tamed elephants to drive wild elephants out of villages and into the jungle, but their efforts are not always successful. Before Genk was killed, the CRU rangers had spent 11 days in Ranto Sabon trying to drive Genk away from the village. Residents of Blang Pante village, where Raja and Raju were held in June, had initially refused to hand the baby elephants over to authorities because they were frustrated in the government’s lack of effective action to prevent elephants from entering their village.

After Raju’s rescue, many of the social media campaigners who had helped push for his release continued to organize events to raise money for Raju and awareness for the plight of Sumatran elephants. Lily Turangan, the founder of the Indonesia Animal Lovers Community, said these efforts will not stop because of Raju’s death. “Although Raju is already gone, we will not stop what we are doing for elephants. Raju is a symbol for our movement to save Sumatran elephants, which are almost extinct. There are still many other Rajus whose lives in the forests there might be threatened.”