As Indonesia’s controversial Jatigede dam project moves closer to completion, West Java residents whose homes are set to be flooded for the planned 4,973-hectare reservoir brought their complaints to Jakarta, demanding that the country’s president step in to resolve land compensation issues.

Around 30,000 people will be affected by the $408 million project, which is scheduled to be completed in February 2014. The government in May announced plans to begin filling the reservoir in September this year, despite protests from some residents who claim they have not yet received promised compensation for the land they will lose to make way for the reservoir.

“The government said the release of the land has already finished. Where are the facts? Many are still pending. We are proof that the release of land is still a big problem,” said Kamarudin, a resident of Cibogo, one of the villages to be affected by the project.

Kamarudin said that a total of 32 villages will be affected by the dam, while the government has only acknowledged 12. And of those that have been recognized and are eligible for compensation, many have only received part of what they are owed. 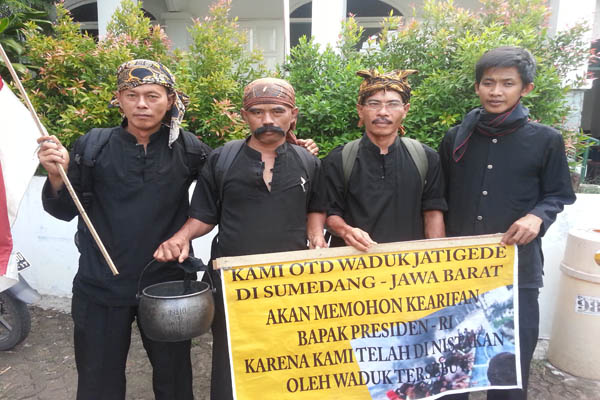 “The government is discriminating [against us]. This September they plan to begin the flooding. We’re not going anywhere. We will survive even if we are drowned.”

Maulana, a resident of Wado village, added that those who have been paid received sums that were far less than the legally stipulated payments. For farmland, for instance, residents should have received 3,500 rupiah, about 36 cents, per square meter. In reality, however, they received just 600 rupiah.

“Losses to the residents were on average 89.56 percent [of what they should have received],” Maulana said.

Maulana, together with other representatives of the Jatigede residents, traveled to Jakarta last week to report their grievances to the National Human Rights Commission and to Indonesia’s president, Susilo Bambang Yudhoyono.

“We ask the president to intervene,” Maulana said. “If this is not resolved it will go against SBY’s [Susilo Bambang Yudhoyono’s] wishes to reduce poverty. This [project] is actually creating poverty for tens of thousands of citizens.”

Once completed, the Jatigede dam will be one of the largest in Indonesia, providing irrigation water for 90,000 hectares of farmland and powering a planned 110 megawatt hydropower plant, the Ministry of Public Works has said.