Scientists in Brazil have described a new species of tree-dwelling porcupine in the country’s most endangered ecosystems. The description is published in last week’s issue of Zootaxa.

A team of researchers led by Antonio Rossano Mendes Pontes [2009 interview], a biologist at the Federal University of Pernambuco, found the porcupine in a small forest fragment in the state of Pernambuco. They christened the rodent Coendou speratus, a combination of its local name “coandu-mirim” and the Latin word “speratus” for “hope”.

The name choice is appropriate given the porcupine’s high risk of extinction. About 98 percent of its forest habitat has been destroyed, while its population is as fragmented as the forests it inhabits, making the species vulnerable in inbreeding, according to the researchers. The species is also actively hunted by locals. 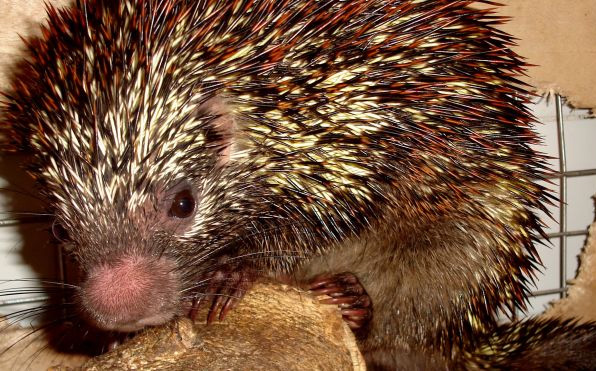 Coendou speratus shares the Northeastern Atlantic Forest habitat with another larger species of porcupine that dwells in the forest canopy. Coendou speratus lives at mid-height and is primarily nocturnal, sleeping in tree hollows during the day. It feeds on seeds.

The Northeastern Atlantic Forest is the most endangered habitat in Brazil. Most of the ecosystem, which lies in the states of Pernambuco and Alagoas, has been logged and converted for agriculture and cattle pasture. Pontes told the Associated Press that many of the species that originally inhabited the region are now locally extinct.

The Northeastern Atlantic Forest is part of the broader Mata Atlântica or Atlantic Forest ecosystem that once extended from Northeast Brazil to Argentina. It too has been greatly reduced, today covering less than 10 percent of its original extent.

The Mata Atlântica is considered one of the world’s biodiversity hotspots. Scientists have recorded 264 mammal species, nearly 1,000 birds, 456 amphibians, over 300 reptiles, and 350 freshwater fish in the ecosystem. Nearly a third of its species are endemic.