A new short animation (see below) highlights the plight of today’s most endangered species by focusing on one which is already extinct: the dodo. The animation, produced by Academy award-winning studio Aardman, introduces the world to the last, and very lonely, dodo. The short was created for conservation organization, the Durrell Wildlife Conservation Trust, which is striving to save a number of species from the dodo’s fate.

“We were moved by footage of the Last Tasmanian Tiger, lonely and resigned to extinction. Pairing this idea with the dodo, which is central to Durrell’s brand and a symbol of extinction, led us to the concept of The Lonely Dodo,” explains David Alexander, senior designer at brand agency TheFrameworks, which also worked on the film.

The dodo is voiced by comedian and actor, Alistair McGowan, while a narrating frog is voiced by actor and writer Stephen Fry. 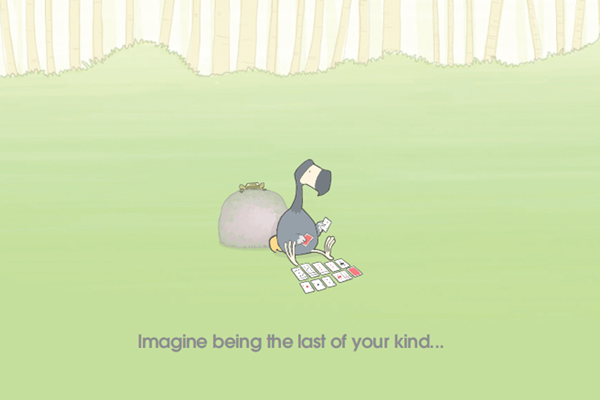 “We know that currently there are more species either in the process of becoming extinct or in grave danger of doing so, than ever before in the history of man,” says Fry who recently co-hosted a program devoted to endangered species called Last Chance to See, an update on Douglas Adams’ book and adventures. “Stemming this otherwise inevitable flow towards the loss of nature and all that it provides requires engaging the next generation, I wholeheartedly support the work of Durrell as they aim to inspire young hearts and minds to empathize with, and thus care, for the plight of endangered species.”

The Durrell Wildlife Conservation Trust was founded by renowned conservationist, Gerald Durrell, who wrote several popular nature books. The organization, which is headquartered on Jersey islands, has been instrumental in saving several species from extinction.