Efforts to monitor the world’s forests and other ecosystems got a big boost in February with the launch of Landsat 8, NASA’s newest earth observation satellite, which augments the crippled Landsat 7 currently orbiting Earth (technically Landsat 8 is still named the Landsat Data Continuity Mission (LDCM) and will remain so until May when the USGS turns control of the satellite over to NASA).

Last week Landsat 8/LDCM sent back its first image, showing the meeting of the Great Plains with the Front Ranges of the Rocky Mountains in Wyoming and Colorado. The image showcases the satellite’s nine spectral bands, which include three visible light bands, two near-infrared bands, and two shortwave infrared (SWIR) bands, among others, as well as two thermal sensors.

Landsat 8/LDCM is the most advanced Earth observation satellite to date. It is the eighth Landsat since the initial launch in 1972. 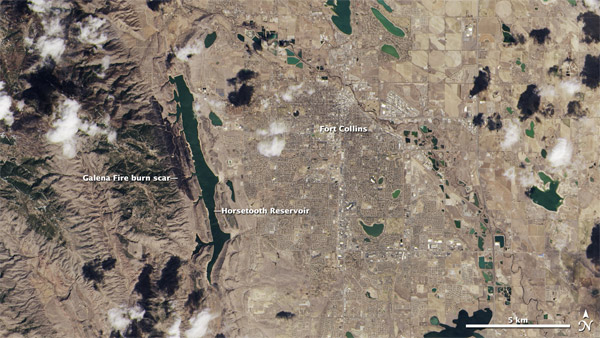 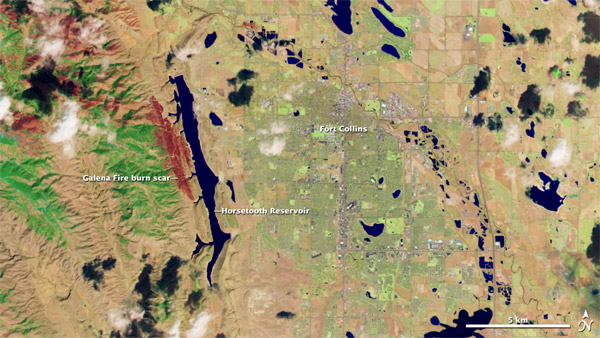 Landsat 8/LDCM will circle the Earth every 99 minutes and cover the entire globe every 16 days, beaming 400 high resolution images to ground stations every 24 hours. The images, which are freely distributed, are used for a wide range of applications, including efforts to monitor environmental change, detect fires, and watch crops. Google is one of the biggest commercial users of Landsat images, which feed into Google Earth, but other users include scientists and conservationists involved in tracking deforestation and forest degradation. Accordingly, the new satellite was welcomed by members of the conservation community.

“Landsat 8 is a much anticipated and critically needed satellite for Earth resource mapping, monitoring and analysis,” Greg Asner, a senior scientist at the Carnegie Institution for Science’s Department of Global Ecology, told mongabay.com. “Nearly every country serious about deforestation monitoring uses the Landsat series, which are made available for free by the U.S. government.

Asner, who leads a team that developed advanced deforestation monitoring platforms known as Carnegie Landsat Analysis System (CLAS) and CLASlite, says the new system marks a sharp improvement over the recently-failed Landsat 5 and Landsat 7, which suffers from partial data loss due a 2003 sensor failure.

“Of course, our Carnegie Landsat Analysis System (CLAS) and CLASlite – the mostly widely disseminated forest change mapping software in the world — will fully support Landsat 8, just as it has for the previous Landsat instruments,” he said. “I am really looking forward to helping the community continue to use Landsat data for conservation and management of tropical forests.” 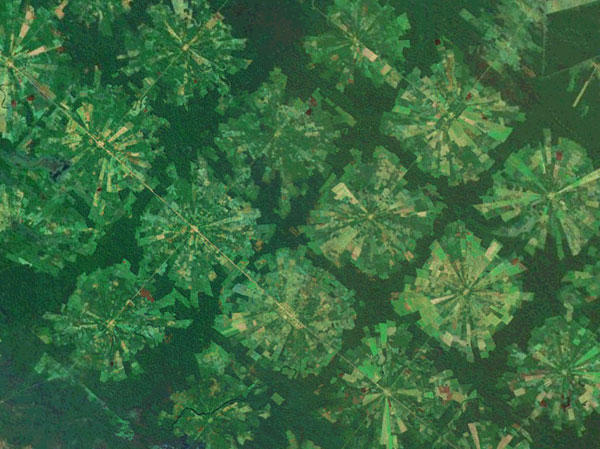 “Images from Landsat 8 will provide the ongoing capability to monitor land cover change around the world by extending the 30+ year historical record of Landsat 5 and 7,” Potter told mongabay.com. “Continuity of high-quality data make Landsat unique for tracking forest conservation efforts.”

Conservationists say they intend to use imagery captured by Landsat to monitor forest cover in near-real time, potentially enabling authorities to take action against illegal deforesters. In the past, Landsat images have provided an important baseline for tracking land use change over time, including the expansion of oil palm plantations in Malaysia and Indonesia, conversion of rainforests for industrial timber production in Sumatra, selective logging of rainforests in Peru, and deforestation for soy farms and cattle ranches in the Brazilian Amazon.

“Without question, Landsat 8 is the most important new satellite of this century for monitoring land cover change,” said Asner. “No other satellites, other than previous Landsat systems, have proven to be as accurate for tropical deforestation and forest degradation monitoring as Landsat 8 will prove to be in the coming years.” 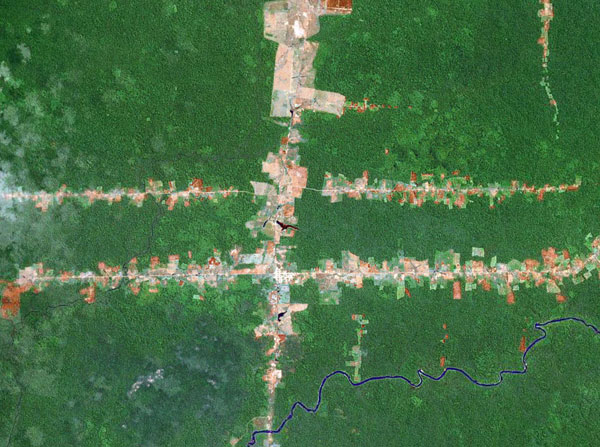 Deforestation along roads in the Brazilian Amazon, captured in 2006. 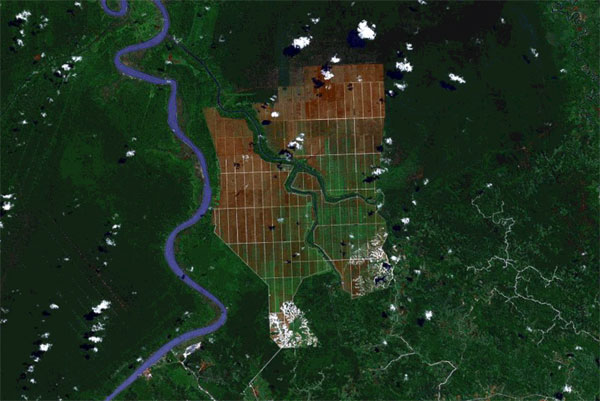 Clearing for oil palm plantations in Sarawak, Malaysian Borneo, in 2006. 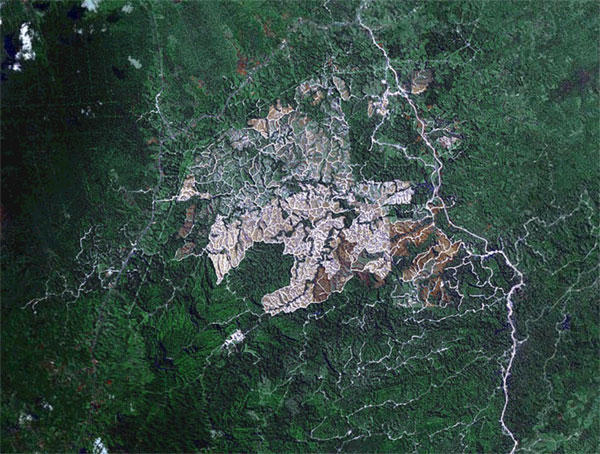 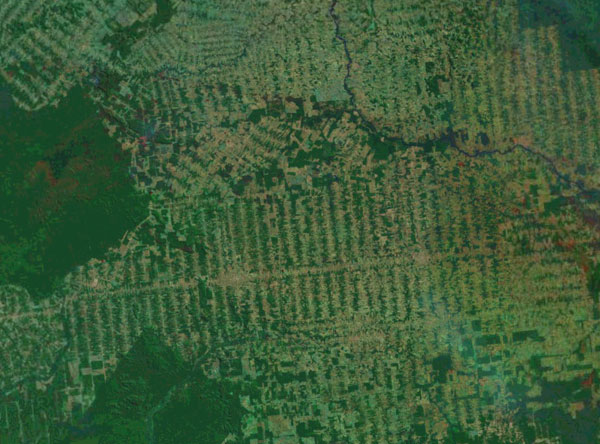 Deforestation in the Brazilian Amazon. 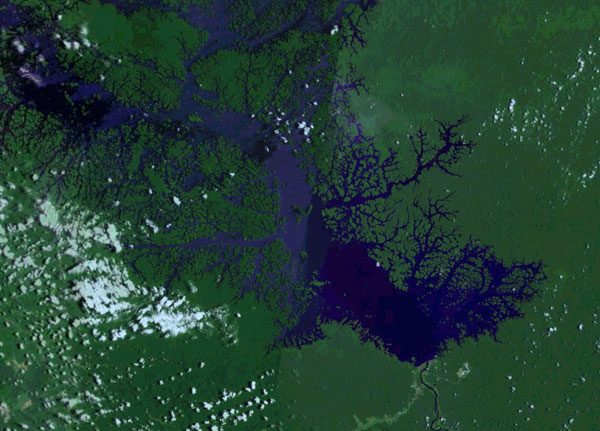 Rainforest flooded by a dam in Brazil. 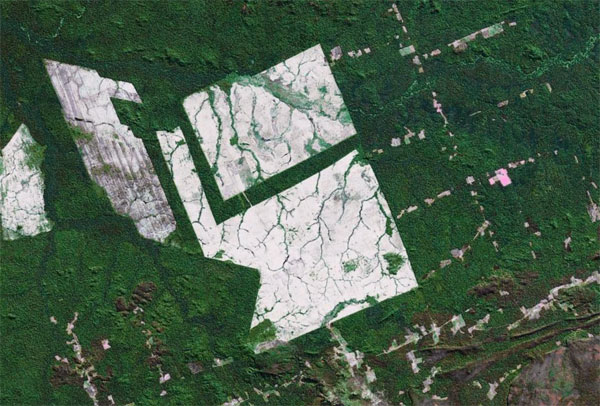 Clearing for cattle pasture in the Amazon. 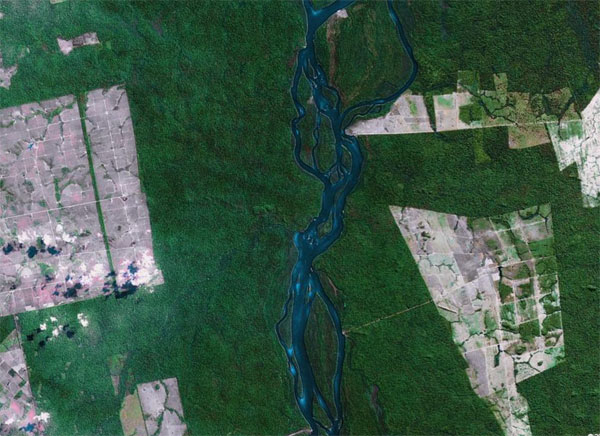