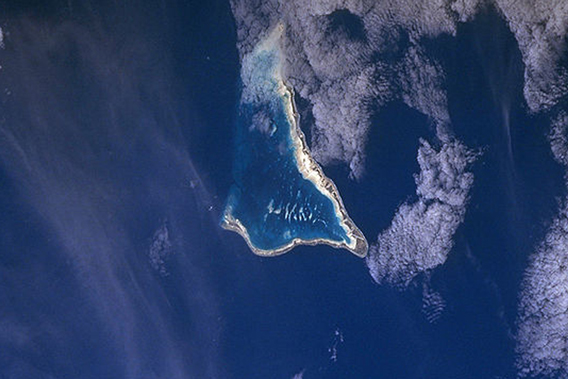 Rising sea levels may force inhabitants of Tarawa to abandon the island by the end of century. The island is home to over 45,000 people. Photo by: NASA.

This week, Admiral Samuel J. Locklear II, the head of U.S. military forces in the Pacific, told The Boston Globe that climate change was the gravest threat in the region. While such an assessment may be surprising, given North Korea’s recent nuclear tests, the U.S. military has long viewed climate change as a massive destabilizing force on global security.

“You have the real potential here in the not-too-distant future of nations displaced by rising sea level,” Locklear said. “Certainly weather patterns are more severe than they have been in the past. We are on super typhoon 27 or 28 this year in the Western Pacific. The average is about 17.”

Locklear pointed to plans for Tarawa Island in Kiribati to possibly move the entire population as rising sea levels continues to swamp the low-lying island.

Already some people have been relocated from the Carteret Islands due to rising sea levels, and a larger relocation effort is planned.

Burning fossil fuels, deforestation, and industrialized agriculture has raised global temperatures about 0.8 degrees Celsius (1.4 degrees Celsius) in the last century. While the world’s nations have committed to keep temperatures from rising 2 degrees Celsius (3.6 degrees Fahrenheit) above pre-industrial levels, this will likely still mean that many low-lying islands and coastal areas will become uninhabitable. Worse still, nations are far from keeping their pledge with most scientists now believing temperatures this century will rise far above the 2 degree target with devastating global impacts.

(03/08/2013) An increasing number of Americans believe there is evidence for climate change, reveals a new poll conducted by researchers at the University of Michigan.

(03/06/2013) Carbon dioxide now makes up around 395 parts per million in the atmosphere, according to new data from the National Oceanic Atmospheric Administration (NOAA). Measuring atmospheric carbon in Mauna Loa, Hawaii, the NOAA notes that last year saw a jump of 2.67 parts per million, second only to a record jump in carbon concentrations in 1998—2.93 parts per million. The news further dampens hopes that nations will stick to their goal of keeping global temperatures from rising more than 2 degrees Celsius (3.6 degrees Fahrenheit) above pre-industrial levels.

(03/02/2013) The tiny territory of Tokelau is today leading a call by 14 Pacific island nations for the world to take action to stop climate change.

(02/26/2013) In the wake of the hottest and driest summer in memory throughout much of North America, and Super-storm Sandy that flooded cities and ravaged large swaths of the Mid-Atlantic coast, many now recognize that the climate change isn’t just real, but that it is already at our doorstep. As this realization continues to sink in, the political will may ripen to take more aggressive action to put a brake CO2 emissions. Already, President Obama, who had remained mostly silent on the issue during his reelection campaign, has made it clear that tackling climate change will be among his top second-term priorities. But the fact remains that even if the entire world switched magically to 100 percent solar and other non-polluting power sources tomorrow, it’s too late to roll back some of the impacts of climate change.