The secret to the surging popularity of sloths: viral Web videos 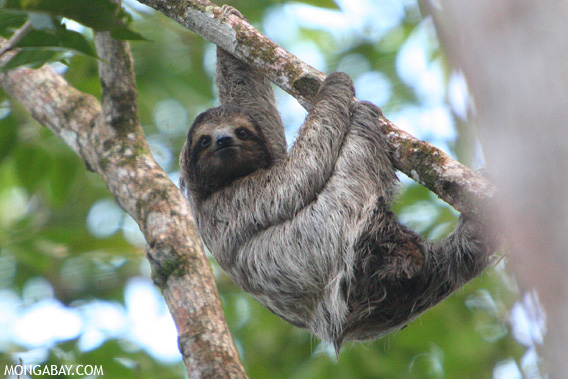 Sloths have been the beneficiary of a surge of popularity of late. A big part of that has been filmmaker Lucy Cooke’s footage of baby sloths at the world’s only sloth orphanage in Costa Rica. Posted on the Internet in 2010, a 90-second clip went viral and has now been watched millions of times. That video, called ‘Meet the Sloths’, “attracted celebrity fans from Ricky Gervaise to Ashton Kutcher and turned the sleepy residents of the world’s only sloth orphanage into international superstars,” according to Cooke.

Cooke subsequently developed other sloth videos that were so successful they “earned her the title ‘Speilberg of sloth movies’ (Indywire)” and even turned American actress Kristen Bell “into a quivering wreck on the Ellen show.”

Cooke has since developed a 50-minute documentary that has been shown on Animal Planet and will shortly appear at the 3rd Annual New York Wildlife Conservation Film Festival.

Ahead of the New York screening, Cooke answered some questions from Mongabay.com about the film, her other work, and of course, sloths. Cooke has written, produced and directed high profile, critically acclaimed documentaries of all lengths from EMMY nominated series for the BBC, to WEBBY award winning online shorts for VBS and Academy Award nominated cinema feature documentaries. She has also served as a host for her own series on National Geographic Wild.

AN INTERVIEW WITH LUCY COOKE

Lucy Cooke: I have been making films for about 15 years. Other examples include the EMMY nominated series ‘Terry Jones Medieval Lives’ featuring the former Monty Python.

Mongabay.com: Why did you choose the sloth as a subject?

Lucy Cooke: I love sloths. I always have. They have a wonderfully eccentric biology and are poorly misunderstood. Common perception is that they are lazy, dirty and stupid. This is completely wrong. The sloths energy saving lifestyle has been a remarkably successful evolutionary strategy and one that deserves the same respect as the cheetah’s. I reckon the sloth should be seen as an energy saving totem for the 21st century and his symbol used to promote a slow living movement. If we humans lived our lives a little more slothfully – slept more, worked less and ate more mindfully – then the planet would last a bit longer.

Lucy Cooke: The film is set at the world’s largest sloth sanctuary in Costa Rica, home to 150 sleepy residents and follows a handful of sloth characters over the course of the year as they are cared for by the world’s only sloth whisperer Judy Arroyo.

Lucy Cooke: We were lucky to be the first people to ever film wild sloths mating, which contrary to popular belief is the only thing they do quickly. It was all over and done with in under ten seconds.

Lucy Cooke: I’d like the film to change public perception of sloths and raise awareness of their conservation needs.

Lucy Cooke: The film has already aired around the world on Animal Planet. It rated through the roof – 7 times the normal viewing figures and won the prestigious Panda Award for best popular broadcast documentary at the Wildscreen Festival in 2012. Lucy Cooke: My first book, A Little Book of Sloth, is published by Simon and Schuster on March 5th. It just received a prestigious starred review in Publishers Weekly who said: “Cooke writes with a firm sense of authority and a loving irreverence that lifts these pages far above most real-life animal books” It can be pre-ordered here. A percentage of sales will go towards supporting the rehabilitation of orphaned sloths.

Following the success of the single documentary, Meet the Sloths, Discovery have commissioned an eight part series set at the sanctuary in Costa Rica which is shooting now and will air in Autumn 2013.

It is going to be a busy year. Full of sloth.