Most popular environmental news articles of 2012 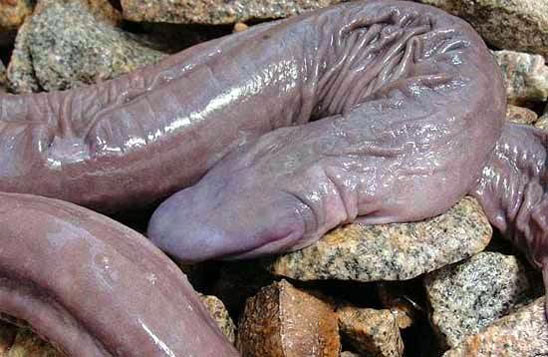 Atretochoana eiselti is the largest known caecilian, attaining a length of 75 cm (30 inches), or more than twice the size of the next-largest known species. This individual was photographed after it was spotted while draining a portion of the Madeira River — a major tributary of the Amazon — for a controversial hydroelectric project. Photo by Matt Roper

The most popular environmental news article on mongabay.com during 2012 was a post about the so-called “penis snake” discovered in a Brazilian river. The article, which explained that the creature was actually an amphibian and that its habitat was being destroyed by a hydroelectric dam, was viewed 238,000 times.

Following the ‘penis snake’, was the “discovery” — a.k.a. the formal scientific description — of the lesula (Cercopithecus lomamiensis). That post had 225,000 reads.

The discovery of the ‘Velociraptor’ spider in an Oregon cave (125,000 page views) rounded out the top three most visited mongabay news articles.

In descending order, the rest of the top 10 most popular articles of 2012: the discovery of a new owl species in the Philippines; a study that recreated bee colony collapse with pesticide-laced corn syrup; a summary of trends in global forest cover; a 2005 story about an invasive python that exploded in the Everglades after eating a native alligator; a report about a giant crocodile in the Philippines; a study about the collapse in African lion populations; and a 2009 feature about how to save the Amazon.

Overall mongabay.com published nearly 1,200 news articles in English in 2010. The news section of the site averaged 275,000 visitors per month.

Thank you to the roughly 24 million people who visited various sections of mongabay.com this year. Best wishes for 2013!