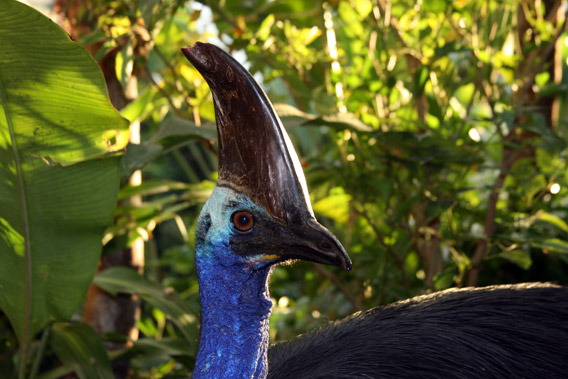 For large, conspicuous, and somewhat notorious animals, relatively little is known about cassowaries, a group of flightless birds that roams the rainforests of Northern Australia and New Guinea.

This fact is highlighted in Cassowaries, a recent documentary by Australian journalist and film producer Bianca Keeley. Cassowaries tells the story of cassowaries struggling to survive after a major cyclone destroyed their rainforest home.

“Cassowaries and their plight was virtually unknown to the wider world, explained Keeley. “It was very important to show people not only how unique, important and amazing these creatures are but how much they are in trouble and really need our help.”

Cassowaries is making its New York city premiere next week at the 3rd Annual New York Wildlife Conservation Film Festival. Ahead of the screening, Keeley answered some questions from Mongabay.com about the film and her career, which spans work as a TV journalist to setting up her own film and TV production company.

AN INTERVIEW WITH BIANCA KEELEY

Bianca Keeley: I started my career as a TV journalist for news on current affairs. Moving on to producing interactive media projects and working on a wide range of productions from music videos to wildlife documentaries before setting up my own company BK Films to concentrate on telling engaging stories for Film/TV.

Bianca Keeley: Five years. I have just recently completed a film called Reptilian Battleground which is an amazing story about saltwater crocodiles and sea turtles and the epic battle that takes place when they meet.

Mongabay.com: Why did you choose cassowaries as a subject?

Bianca Keeley: They are truly amazing creatures whose behavior and plight is little-known and has rarely been filmed before. Personally I find them prehistoric and very charismatic, but they are in real trouble mainly due to habitat destruction and there was an important story that needed to be told.

Bianca Keeley: Cassowaries tells the action-packed, heart-warming stories of the cassowaries of North-Eastern Australia struggling to survive after a one in 50 year cyclone destroyed their rainforest homes, while revealing for the first time the natural history of the magnificent endangered Southern Cassowary.

Bianca Keeley: I had a wild male cassowary father who I spent a lot of time with from the time his chicks were two weeks old, right through until he kicked them out of home when they were around 9 months. I felt very privileged that he allowed me to spend time with his family and watch these chicks grow up.

Bianca Keeley: Cassowaries and their plight was virtually unknown to the wider world. It was very important to show people not only how unique, important and amazing these creatures are but how much they are in trouble and really need our help. It is hoped the film educated both at a local and international level.

Bianca Keeley: I have just completed a film called Reptilian Battleground which is an fascinating story about saltwater crocodiles and sea turtles and the epic battle that takes place when they meet… so now I need a little rest and then we’ll see what’s next.